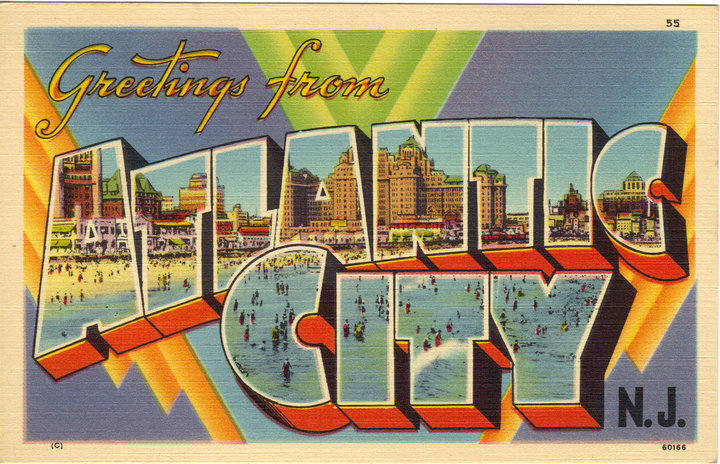 We made some tactical errors, completely our fault, but it was a good trip nonetheless. For one thing, we left too late. Check-in at the hotel is at 4, and we didn’t leave our house until almost noon. It’s a three-hour ride — supposedly — and we were putting way too much emphasis on that 4 o’clock restriction. In retrospect, we should’ve left early in the morning, parked our car inside the Caesars garage, and started the day before we had access to the room. It feels like we sometimes do some stupid shit. Oh well. 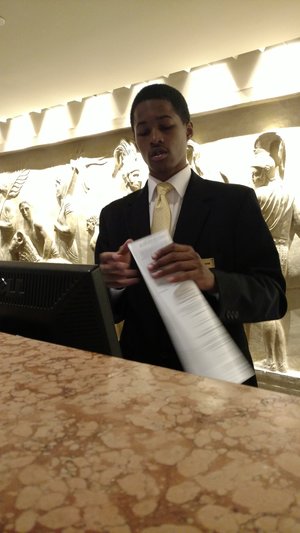 Traffic in Philadelphia was horrendous, as usual, and we didn’t arrive until 4:15. This is Dupree who checked us in at the main counter. I tried to make him laugh a couple of times, but was not successful. Dupree was nothing if not stoic.

The room was nice, with a great view o’ the ocean. As you can see below, it wasn’t super-sunny out, but it was relatively warm. Toney wanted to change clothes, but I was itching to get the party started. It was late in the day already, and we’d just rolled into town. I was in no mood for lounging and watching the syringes and bloody gauze wash up on the shore.

The bathroom was a little weird. It had a sliding fiberglass barn-door type situation with large open gaps on both sides of it. So, if you were getting out of the shower, somebody could easily walk past and see your entire ass and/or wang. Or whatever. I didn’t care for that. The toilet was inside another room — a room inside a room — so at least there wouldn’t be any public wipings or anything. Sometimes that fancy stuff doesn’t make practical sense. Right? What’s wrong with just a normal door? Normal doors have served us well for centuries. 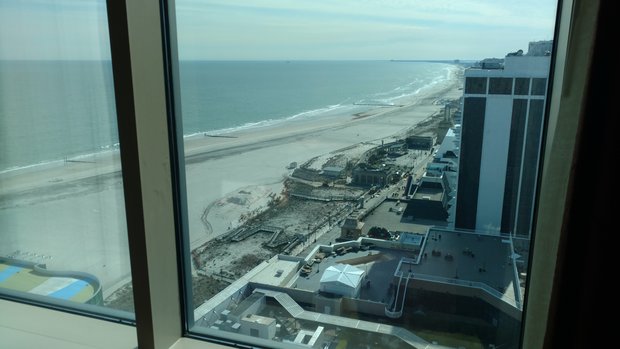 We had a beer in the room, from our white trash carry-in cooler, and went downstairs shortly after arriving. Happy Hour at Gordon Ramsay’s Pub was still running until 5. We had to hurry to get even one half-price pint there. 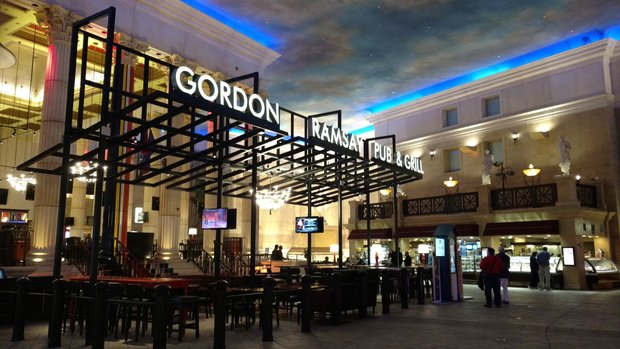 We looked at the draft beer list and, as usual, I found it to be fairly predictable. Somebody should allow me to choose their beer selection. I mean, it wasn’t bad, it’s just… what every place like that offers. Ya know? We went with Fuller’s ESB, and they were $4.50 each — usually $9. I find that to be ludicrous, but whatever. The beer was good, and we’d vowed to only have one at each stop, and keep moving. 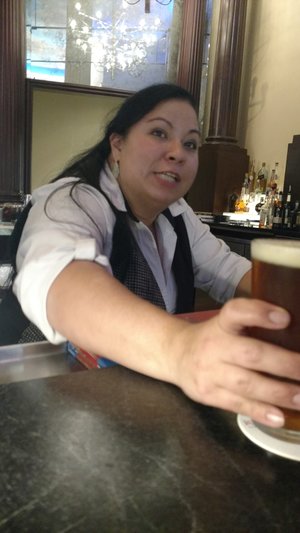 Here’s our bartender serving us the first of what I was hoping would be many adult beverages. I sent the photo to my brother with the caption “It begins…”

Toney suggested we get dinner, and we’d pre-chosen a place in the Tropicana called Broadway Burger Bar. I was assured that it’s just a short stroll down the boardwalk. Just seventeen minutes, according to Google. I already had two beers in my great belly and frowned at this news. Who wants to take a walk in the middle of a “session.” Not me, that’s who.

But it wasn’t bad. It felt good to get outside. It was a little stuffy inside Caesars, and the cool air was nice. The boardwalk was sparsely populated, but far from empty. We walked past a giant billboard advertising a future appearance by Rod Stewart, with special guest Cyndi Lauper. Some cynical woman walking past said, “Ha. Cyndi Lauper. That’s hilarious.” It rubbed me the wrong way. If you’re going to be cynical and negative, at least approach it creatively. Just shitting on everything does nothing to benefit humanity. In fact, it’s a drain. I wanted to holler, “Yes, not all of us can work in a State Farm office in Ass Zits, New Hampshire!” But, of course, I just kept walking.

As soon as we walked through the doors of the The Tropicana we were hit with a wave of heat, followed quickly by a tidal wave of cig smoke. Sweet sainted mother of Aldo Nova! Clearly, they not only allow smoking in that place, but they encourage it. Possibly even require it. I’m not a fan and was instantly frowning. Where is this goddamn burger place? We need to get out of this hellish emphysema hotbox. 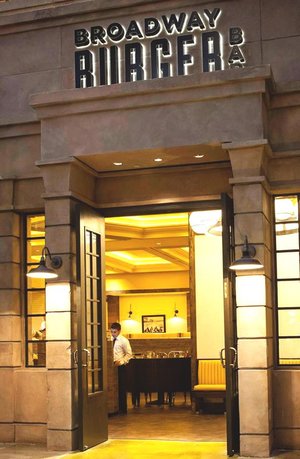 And we walked… and walked… and walked… That casino is sprawling and we could not find the restaurant. They had fancy interactive directories that did nothing but confuse us further. It was so freaking hot in there I couldn’t believe it. And the smoke was entering my body from every angle. It looked like the clientele was a little on the riff-raff side, and my good mood was fading. Oh, it was fading.

We finally found it, and they led us to a dark dining room deep in the bowels of the place. Before we even sat down I was bitching about the darkness. “I guess we should’ve brought our coal miner helmets,” I said to whoever wanted to listen. Indeed, I couldn’t see the menu. I had my phone out, with the flashlight app engaged… What the hell, man?

We both ordered cheeseburgers, and a Cape May IPA. Again, it was the only thing on the beer list that was mildly intriguing. The waiter said, “Good choice!” And I wanted to say, “Thank you, but we’ve already had enough smoke blown up our asses just walking through this shithole.” Also, I asked what came on the burgers, and he said lettuce, tomato, and pickles. And there’s ketchup, mustard, and mayo on the table. “So, no onions?” I asked. I like onions on a burger. It’s an important component, right? The dude acted like he was taken aback by my exotic request. Like I’d asked for a pineapple ring or something. But he promised to look into it. Crazy.

As it turned out, the burgers were fantastic. Possibly one of the best I’ve ever had. I don’t know if I was just hungry, or what. But that shit was excellent. The beers — served in a super-pretentious brandy snifter-type deal — was OK. I don’t think the boys at Dogfish Head have anything to worry about, though. 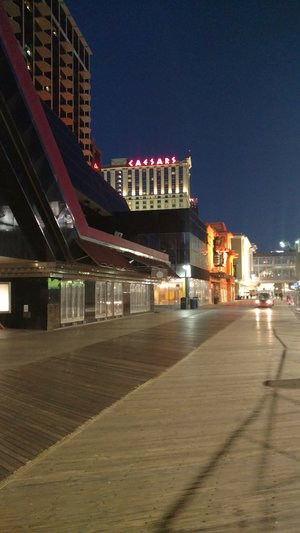 But the whole ordeal — the frustration of not being able to find the place, the walking, the high-heat, and the cig smoke — kinda broke us. Neither of us was now in the mood to continue our self-curated pub crawl. As we walked back to Caesars the boardwalk was deader than Kelsey’s nuts. We discussed having a beer at a place called The Continental, but screw it. The spell was broken. We returned to the room. and had another Founders All-Day IPA from the hillbilly cooler, took in the view for a little while, and turned in early. It’s a sad state of affairs: so easily knocked off our game…

The next morning I went downstairs and got us two large coffees from an over-the-top pastry/coffee shop. They had stuff stacked in that place like they were expecting thousands of people to descend upon them within the hour. I also ordered a chocolate chip cookie with a circumference only slightly smaller than a steering wheel, for us to share.

Then we visited a breakfast buffet, for $19.99 each. The food was good. Toney went to the omelet station and had the dude in the Chef Boyardee outfit create something to her specifications. I just stuck with the tried and true: scrambled eggs, hash browns, bacon, etc. It was all very good. Expensive, though. Am I wrong?

It was a sunny day, and we walked around looking at the ocean and just taking it all in. It was nice. Good to get away. The ride home was aggravating, because of the Philly traffic again. This time it was worse than the last time. We were literally sitting in PARK for extended periods. That’s not good for the ol’ blood pressure. But I maintained. I didn’t blow a gasket or anything. Just some mild muttering of profanity, and many changes of the SiriusXM dial. SiriusXM was my musical pacifier. 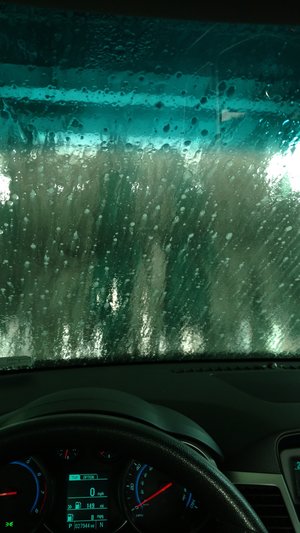 When we got home I went straight to the car wash and knocked all the road filth off my new car. I’m still in the mode of keeping it shiny and clean. That’ll pass, of course. But it’s where I am now.

So, I’d rate the trip a B. We should’ve left earlier on Sunday, and not ventured far from Caesars that night. That place has a dozen or more restaurants and bars in it. We didn’t need to hoof it to that Pall Mall sweat lodge at The Tropicana. But, it’s a lesson for next time. It was fun, and not super-expensive. We’ve vowed to do these little quickie getaways from now on. This was a good start in that direction.

And the kids? Nothing horrible happened, as far as I know. There were some shenanigans, apparently, but I don’t believe the cops or the military were summoned. And the house was still standing when we returned, so I consider it a win.

For a Question, I mentioned SiriusXM. It, of course, requires a monthly subscription fee. After my first six months are done, anyway. I’d like to know what subscriptions you pay for monthly. Use the comments. I finally canceled eMusic, after ten years. But I still subscribe to SiriusXM, Spotify, Texture (a magazine app), MLB At Bat, Netflix, and Hulu. What about you? Bring us up to date on it, won’t you?

And I’m going to work now. You guys have yourselves a great day.