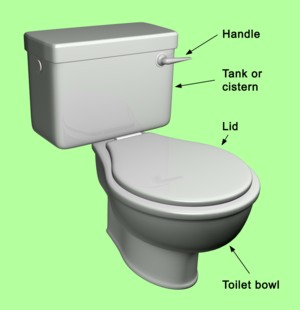 A couple years ago I had a conversation with someone, and they were warning me about teenage boys and their mega-turds. About how they can flat-out destroy residential plumbing…

I remember laughing about it, and telling Toney, but can’t recall who gave me this advice. I thought about it all weekend, and came up empty. Was it one of you guys? If it was, please tell me. Because I need closure.

I was very skeptical, I know, because I was once a teenage boy myself, and don’t think of it as my Big Log Years, or anything like that. No, I just assumed the person’s kid must’ve been, you know, portly, and it had more to do with the amount going-in than his age.

Indeed, I have a cousin who is a long way from petite, and I remember him overflowing my grandmother’s toilet when he was twelve or thirteen. I can still see her shrieking in terror and stabbing at the culprit with the stick-end of a plunger, trying to bust it up and end the fecal nightmare.

“It was as big around as the top of my arm!” she later exclaimed. And I don’t think I stopped laughing until the middle of the next week.

It never occurred to any of us to blame it on him being thirteen, or whatever. I mean, seriously. That boy could eat.

And why do I bring this up, you ask? Well, you can probably guess: the toilets at our house are suddenly overflowing on a weekly basis. Coincidentally, after a certain thirteen year old has exited the small room with a Musician’s Friend catalog under his arm…

A couple days ago I had to perform an emergency plunge in the upstairs bathroom, and the water was circling menacingly at the very top of the bowl. We barely averted disaster with that one, and while I was tending to it the smoke alarm started going off in the living room.

“Good God!” I hollered. “You’re overflowing toilets, setting off alarms… Have you ever heard of a glass of water?!”

Toney was making BLTs for dinner, which always sets off the smoke detectors. But it was a lot more fun to blame it on the Christmas ham our boy had apparently introduced into the sewage system.

And over the weekend it happened again, this time downstairs. He came to me with a panicked look I’m starting to recognize. “Not again!” I bellowed, before he’d even had a chance to say anything.

“Why does this keep happening?” Toney said.

“Why? Because a toilet isn’t designed to handle something the size of a Chinese gymnast!” I yelled over the sound of rubbery water-suction.

But I got it under control in short order, and it wasn’t nearly as menacing as the upstairs adventure. I gave Mr. Pipebuster a few more samples of my “comedy,” and returned to the bunker.

And I started thinking… maybe it does have something to do with age? Because the Secret is skinny. He swims four or five nights a week, and doesn’t have an ounce of body fat, that I can see. He’s also a picky eater, and often just moves his dinner around on his plate for ten minutes, then calls it a day.

So, who the hell knows? I wish I could remember who told me about it, so I could go back for further research.  Do you know anything about this?  Is there something about the early teen years that translates into jumbo-poop?

Later that night I was watching Play Misty For Me (I gave it four stars at Netflix), and paused the DVD for a brief stand-up bathroom break. Then I went down to the basement and grabbed a beer, and decided to check my email during intermission.

And at first I thought Andy was drinking water. That’s what it sounded like, a dog lapping from a water bowl. But it kept going and going, and I remember wondering if Black Lips might be diabetic.

After this “drinking” continued for a solid minute, I started to get suspicious. I walked out into the family room and Andy looked at me, concerned, from the loveseat.

It was the downstairs toilet, overflowing again. Apparently I hadn’t done an adequate plunge-job earlier in the day, and water was now standing in the bathroom and flowing into the hall. I mean, lots and lots of water.

Sweet sainted mother of Gerry Rafferty!! I waded into the bathroom, splashing water all around, and began a frantic attack with the plunger again. This time I worked it so hard I could hear gurgling in the shower drain.

The water receded, but plenty of damage had already been done. I sloshed into the hallway, and the carpet was completely saturated the entire length of the washer and dryer. Every time I took a step water bubbled-up like I was taking a seaside walk.

I looked at the mess and calculated it would require a full hour to correct. Boy, this really eats it from the ass-in… I sighed, knocked something off the top of my foot that looked like an onion skin (I tried not to think about it), and went to the basement for more beer.

And about ninety minutes later I had roughly 80% of the water off the floor. We don’t have a wet/dry vac, so I had to do my best with towels: dozens and dozens of towels. It wasn’t perfect, but it was pretty good.

I finished the movie, and when I climbed into bed Toney came half-awake.

“Be careful going into the downstairs bathroom,” I told her. “About a thousand gallons of water came out of the toilet.”

“OK, goodnight,” she said, and returned to her sleep-breathing.

The next morning I got up and there was a table fan blowing across the flood zone. And, of course, Toney didn’t remember our brief conversation from the night before. I told her the story, and she tried to blame me for overflowing the toilet.

“I peed!” I hollered. “You can’t clog a toilet with pee! Unbelievable. I spent three hours cleaning up that mess, and now I’m being viciously attacked? I had nothing to do with it, I wasn’t the author of that masterpiece…”

I had a cup of coffee, and went in there to take a shower. And when I came out my glasses were all foggy, and I tripped over the fan. My right leg got wrapped up in the cord, the blades started pounding against my shins, and I almost did a face-plant into the side of Toney’s computer desk.

How was your weekend?