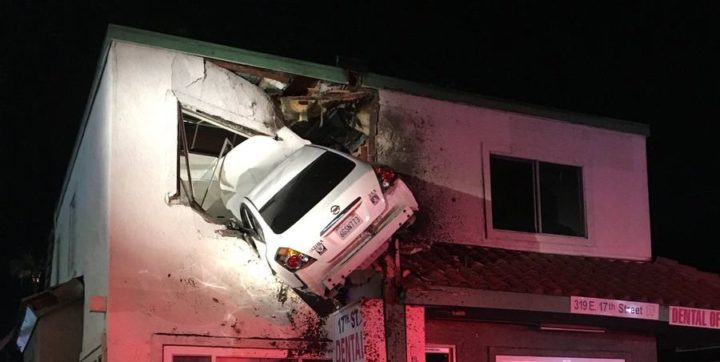 The only time I’ve ever been involved in a true “crash” was when a dumbass high school friend drove his car — with me in the backseat — straight into a telephone pole on Myers Avenue in Dunbar. I think he was monkeying around with the radio, not paying attention, and just slammed straight into the pole. I remember one of the hubcaps, or wheel covers, came rocketing off and ended up about 20 yards away. And it was red hot for some reason when we picked it up. Nobody was hurt, but the dude’s car was all gnarled and smoking. It kinda pissed me off, as I recall.

Other than that… I’ve been pretty lucky. Or maybe not lucky, just really good at what I do. That’s how I prefer to think about it, but feel like cockiness might jinx me. So, we’ll go with lucky.

There were a couple of small incidents that I wouldn’t categorize as crashes that are also worth mentioning. One time an ex-girlfriend and I were at a stoplight and kissing (this is when I was about 17 or 18) and my car started inching forward and I bumped the guy in front of me. He jumped out and began waving his arms around and shouting about us “horny ass kids” (accurate) and telling us to “get a room” and all that stuff. I guess he’d been monitoring us with alarm in his rear view mirror. Heh. There was a lot of shouting and gesticulating. But there was no damage and he eventually drove away. My girlfriend and I then started laughing hysterically and couldn’t stop for a good long time.

Another time I was with my friend Bill in his dad’s pickup truck. We were smoking cigars (who the hell knows?) and Bill was trying to relight his and drove into a guardrail. It was at a curve in the road and the truck just followed the guard rail around that big curve while making a sickening grinding noise. The thing was all scratched up and dented, and we kept repeating, “Oh shit Oh shit Oh shit.” But I think Bill parked the truck on the street with the crushed-in side on the outside, and it was believed somebody had sideswiped it during the night. I don’t think he got into trouble for it, if I recall correctly.

But that’s about all I have, thankfully. Toney was involved in a bad wreck one day in Atlanta when a tractor trailer slammed into the back of a car she was riding in. The trucking company had someone out there within minutes, she said, trying to get them all to sign papers and accept checks for $1000 or whatever. All three girls were hurt, but none seriously. It happened days before Halloween, and Toney remembers one of her friends being lifted into an ambulance while wearing an elaborate bumblebee costume. Ha! This was before Toney and I started dating, but we worked at the same place and I drove past the aftermath of it. Scary! Thank God they were all OK.

I don’t have much else to report. I’ve witnessed some crashes, and happened upon a few shortly after they occurred. There were also a few close calls — including one with my parents just last week. But none with me directly involved. What about you? Have you been as “lucky” as I’ve been? Please tell us about it in the comments.

Before I call it a day here, I’d like to invite you to stop by the new podcast website. Right here. It features photos and expanded show notes. For instance, I just returned from a trip to West Virginia, where I visited my folks. I summarized the whole thing in Episode 220, and you can check out some pictures (old and new), as well as a few links that further illustrate some of the stuff I referenced in the episode. Check it out if you’re so inclined. If not, that’s cool too.