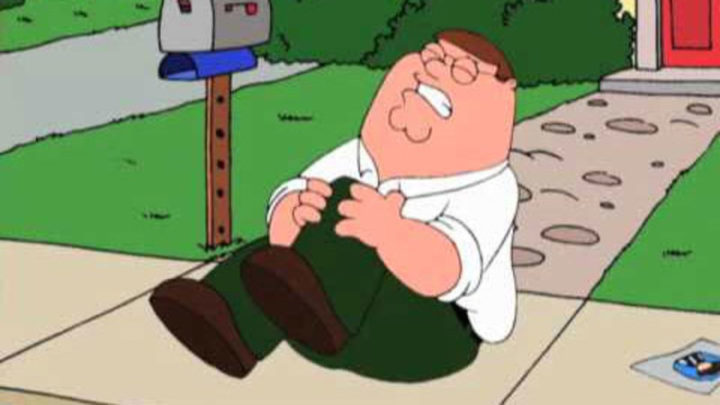 Last Saturday we went to the Paul McCartney concert in Syracuse, and arrived way too early due to paranoia about getting caught-up in a Winston-Salem-style gridlock. Once the gates were finally opened, and we passed through Israeli airport-level security, we made our way to our seats. Ours were on the right side, if you’re facing the stage, pretty far down, near the floor. Great seats! But as we were heading down there, single file on the stairs, I banged my right knee off the back of one of the aluminum bleacher seats. And I don’t want to exaggerate it, but it was PERHAPS the most severe pain I’ve felt in my life. A powerful jolt of electricity rocked my abundant body, and birds and stars were circling my head. There was no quick-fade, either. I’ve stubbed my toes, like everybody else, and that also sucks a big curved one. But it usually fades fairly quickly. This was a sustained hurting.

Yes, I’m lucky to have never fallen off any ladders (mostly because I don’t climb them) or been involved in any serious car crashes or had a heart attack (yet), or anything of the sort. I seriously can’t remember anything hurting so bad as that shit did. I don’t know if it hit in just the right spot, or what. But it was extreme pain that would not leave me alone for the entire run-up to Sir Paul, which was a long, long time. Here’s the setlist, if you’re interested. The show was great fun, the knee crap… not so much. But I’m fine now, thanks for asking.

What’s the most extreme pain you’ve experienced? I know this is probably going to lead to some not-so-funny stories, but we’ll go with it anyway. Do you have anything on this subject? Tell us about it in the comments.

Toney left a little while ago for five days with Nancy in North (or is it South?) Carolina. I felt a little sad when she left. I’ll miss her. And it didn’t help that my Reds managed to blow yet another game today that they had in the palm of their hand, thanks to their “stellar” bullpen. I’m kinda depressed, if you want to know the truth. I also got a haircut a little while ago and it feels like my entire upper body is covered in those little hairlets. I think I’m going to have to take a second shower. I’m writhing in tiny hair agitation. I’m just glad I’m not one of those guys who are covered in pubes from the eyes on down. Can you imagine?

I know this one is brief. Sorry about that. And I realize it’s been way too long. I apologize for that too. But there’s more to read at the No New Jeffs Substack page, if you haven’t already. And there’s the podcast, as well. OK, there’s not much reading with a sound recording, but you know what I mean.

In case you’re wondering, before I call it a day here, the SiriusXM Lithium channel is now playing in the bunker, and I’m enjoying a Pabst tall boy on a beautiful Saturday evening. I’ve paid $13 for one of these babies at rock shows. The one I’m drinking now? About a dollar, give or take.

Have a great day, my friends. I’ll be back faster than last time, I promise.

Let us know about your tales of pain, and I’ll see you again soon.