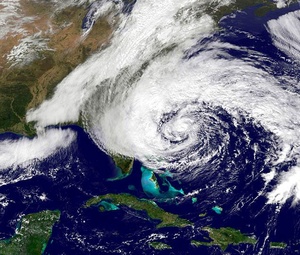 Hurricane Sandy Duncan is bearing down on us, and tonight at work could be interesting. In fact, if they start talking about closing Interstate 81, I’m getting the hell out of there.  I don’t want to be stranded 40 miles from home, with empty bleach bottles flying around.

By the way, what time is the glass eye of the storm supposed to make landfall?  Heh.

I talked to my brother yesterday, and he’s going through a bunch of old VHS tapes from the 80s.  He owned one of the earliest VCRs — I think we had to hook a water line up to it — and used to record EVERYTHING.  It was a crazy novelty at first, and he filled tape after tape with just regular everyday TV broadcasts.

A few things I hope he finds:

The news report from when I won a 105-second “record run.”  I had 105 seconds to run around Budget Tapes and Records, and grab as many albums as I could.  There were tons of restrictions, however, and when the dust settled I got to keep 96 albums. A local news channel was there, and they showed me in fast-motion bouncing around the store.  My brother recorded it, and if he finds it… I’ll definitely share it with you guys.

During the early 80s I wrote scripts for a local “comedy” show, called Dick’s Half Hour.  He has copies of all six episodes, or whatever.  I’d like to see those again.  Holy shit.  My best contribution was a skit about the “time lady,” who answered the phone and said, “The time is… 7:14 pm.”  In my version she was a real person, being held hostage by the phone company.  At one point the door opened and someone flung her a sack lunch, before slamming and locking it again.

There was a news report showing a woman distraught because of a mining accident, or house fire, or something.  She was morbidly obese, and launched into full hysterics.  She began screaming, “NOOO NOOOO!!” then fell backwards — and out of frame — before her cigarette flung high in the air and spun in the center of the screen for a second or two.  We watched that thing a hundred times, and laughed so hard tears were rolling down our faces.  I hope he finds it.

And this is a long-shot… but maybe he’ll even come up with the Holy Grail:  the drunk-driving “Janie died” PSA.  You know, “I’d like to watch the sun come up another 50 years, I’d like to write a novel that will bring the world to tears…?”  I think it was broadcast during the 1970s, so he probably doesn’t have it.  But I can dream, can’t I?

His exploration has already turned up a rare jewel.  Last night he made a digital copy of the Amazing Delores documentary, and uploaded it to YouTube.  Delores lived in Dunbar, went to school with our parents, and was an eccentric.  She was a singer and dancer, and all-around local legend.  The doc is GREAT.  You should definitely watch it.  Here’s the link.  It’s about 30 minutes long, and super-rare.  Check out #9 here.

And I’m going to work now.  Hopefully an 80 mph wind gust doesn’t send me sailing through a guard rail or something.  Jesus J. McChrist…  I’m a bit puckered right now, if you want to know the truth.

Be safe out there!