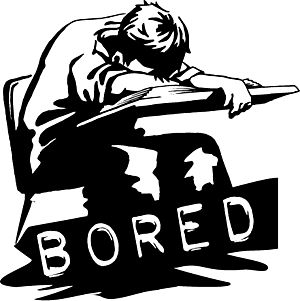 Every evening, when I’m working, I call my kids and tell them goodnight.  And on Tuesday and Wednesday this week the younger boy acted like he was down in the dumps.  I asked what was wrong, and the first time he just mumbled, “Nothing.”  But last night he told me he was bored.

“Bored?” I shouted.  “We have two TVs with 700 channels on them, two computers hooked up to the internet, you have a Kindle Fire and an iPod, and there are mountains of books and CDs in the house.  Or you could go out and ride your bike, give Andy a bath, weed-whack the yard…  There are a million things.  How could you be bored??”

“There’s nothing to do.”

I don’t want to be a bastard, but that kind of stuff irritates me.  ‘Make your own fun’ was how we survived during the era of 4 TV channels and MAD magazines.  Shit, man.  My head would’ve probably exploded if I had all the options he does.  And I don’t remember being bored; I stayed plenty busy.  You know, the devil and me…

Whatever.  There’s probably more to it.  It’s shocking, I know, but I sometimes feel like I’m not getting the full story.

I could be wrong, though.  It’s been known to happen, on rare occasions.  But I do know this: I had a blast as a kid, and my parents worked all the time, just like I do.  We had Gilligan’s Island on a 19-inch TV, and all the crazy stuff that was happening outside.  And not much else, on the entertainment front.

What do you think?  Please give us your thoughts on this.

And just so you know, the younger boy and I are planning a day trip to NYC in May. I’m going to pull him out of school, and we’re going to spend the day browsing through bookstores and record stores.  He loves that kind of stuff, just like I do.  So, maybe he won’t be bored that day?  I hope not, ‘cause it’ll be a blast for me.  He’s a great kid, and I’m looking forward to it.

I know this one’s short, but I’m up to my eyebrows in overtime.

ONE MORE THING: I don’t want to bring the conversation to a screeching halt by posting a standalone update about this, so I’ll just put it here:  All day Friday and Saturday my novel, Crossroads Road, is available for FREE in the Kindle Store. Completely free, with no strings attached. Here’s your link. Please let your friends and enemies know, and download a copy for yourself. Kindle offers a great lineup of apps, so you can read on your computer, tablet, or phone. They cost nothing, and are really cool. Here’s where to get ’em.  Thanks guys!