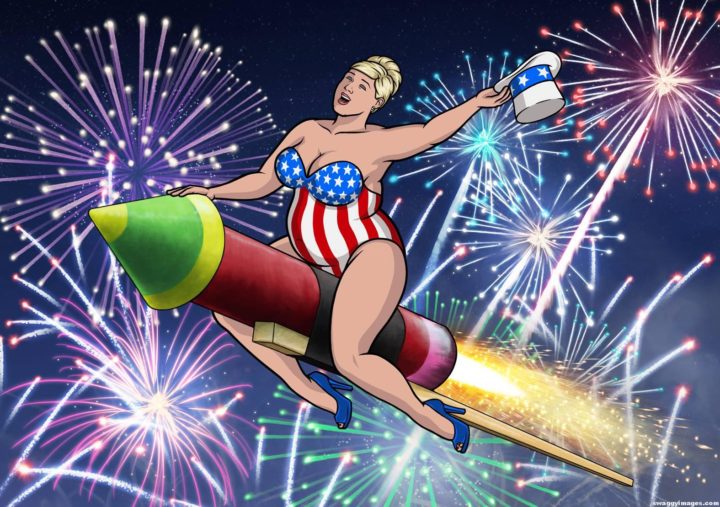 I love bonus Saturdays, dropped all willy-nilly. So today feels like Monday, yet tomorrow is Friday already! That’s pretty goddamn sweet, no matter how you slice it. Thanks to all the wig-wearers in 1776 for risking being hanged, etc. so that I might enjoy an additional Saturday in 2018. I’m tearing up…

In all seriousness, how was your holiday? Was it traditional: vast quantities of grilled meats, alcoholic beverages, and fireworks after dark? That pretty much describes ours. For some reason, they’ve loosened up the fireworks laws here, and you can buy real Myrtle Beach-caliber rockets and whatnot, until July 8. So, the boys have been all up in that shit. Last night they were shooting off what looked like WWI mortars. I thought they were going to burn down our house, or the house of a neighbor, but the four or five Centennial IPAs in my great belly took the edge off my… common sense.

I have to return to work today and tomorrow, which felt like a bullshit turn of events as I hoisted my heft off the platform this morning. But now I’m OK with it. I’m excited to bask in the glory of a false Monday. Is that weird? If so, I’m fine with it.

Somebody in the Middle East somehow hijacked my Spotify account yesterday. I received an email saying there was suspicious activity. Then a few minutes later… a notification that my login information had changed. What in the cherry blossom hell?? I immediately emailed them and they took care of it. Some guy with a super-pretentious quote in his signature file (something like ‘painters paint on canvas, but musicians paint on silence’) took the bull by the balls and made sure everything was returned to me. I did a Google search for the email they used, and it returned pages and pages of Arabic text.

Why? Who hacks Spotify? Are they trying to scam somebody out of a few free Eddie Money listens? Seems like high effort for low return, in my opinion. Maybe they were trying to get at my credit card info? Who the hell knows? Mr. Paint On Silence didn’t allow them much opportunity. I have to hand it to them. Nicely done.

The only weird thing I noticed afterward was some unknown musician listed in my favorite artists section. I wish I’d written down his name, but I immediately deleted it. He was some sort of exotic foreigner holding what looked like a zither or some shit. I mean, what the hell?? I feel like I’ve been violated.

I just posted Episode 6 of the world famous Jeff Kay Show, at Patreon. I literally just got it back from the producer dude, five minutes ago. I gave the first 30 seconds a listen and it sounds echoey and odd. Or maybe it’s in my head? That’s certainly possible. In any case, here’s yer link. Enjoy it!

This is the description: In this episode, we discuss the Where Are They Now? issue of Sports Illustrated, frustrations with the Credit Union, my haircut tipping rules, and an update on my attempt to reconnect with baseball. Some characters who appear in this one: Johnny Bench, Mr. Jeffreys, Chip Malfunction, and a girl with one fearless breast.

And I need to get going, boys and girls. I’m gonna wolf down half a Domino’s pizza, and navigate the Devil’s parkway. Wish me luck with both those things, won’t you? Hopefully, I won’t shit myself near the Throop exit and go cartwheeling across the median.

For a Question, I’d like to know which famous tourist destinations you have no interest in visiting. One that immediately jumps to my mind is Australia. I know that might be considered an odd choice, but it seems hot to me. Exceedingly hot with a lot of deadly animals and insects roaming around. I could be wrong about this, but I think even the cats and dogs are venomous in Australia. I’m sure there are beautiful parts of it, so I might be completely misguided. But that’s my contribution. What’s yours? Use the comments link.

Have a great second weekend!