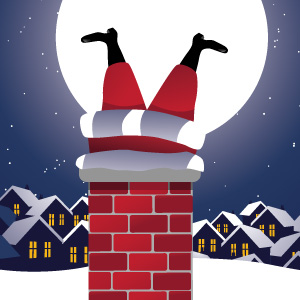 Hello Surf Reporters!  I hope everyone had a pleasant holiday.  Ours was nice, which isn’t always a given around here.  Oh, it can go either way…  But Christmas 2012 turned out to be enjoyable.

I worked on Monday night until 8, and it was snowing pretty heavily as I drove home.  Cool.  A genuine white Christmas is super-rare, but we got one this year.  I could feel the tiniest bit of holiday spirit building up inside me, while navigating the Devil’s Parkway.

Toney had a big spread of food on the dining room table when I arrived, plus a Saranac winter sampler and six Dogfish Head 60 Minute Ales in the downstairs fridge.

I started with the Dogfish, which might very well be my favorite fancy-ass beer.  Sweet sainted mother of Dr. Roy Hinkley, that shit is good!  Then I ingested two large pulled pork sandwiches, made with Jack Daniels bourbon, and everything was moving in the right direction.

The boys went to bed early, and Toney wasn’t too far behind them.  I stayed up and polished off my three Dogfish Heads, plus a porter from the Saranac sampler, and eventually called it a night, as well.

The younger hooligan shook me awake at 5:45 the next morning, and for a few seconds I didn’t know what was happening.  I was clear-cutting timber, and experiencing the kind of sleep I call Death Lite.  But I got my bearings, farted 14 times in a row, and went downstairs.

Toney and I don’t really exchange gifts anymore, because money is always tight and we put everything toward the kids.  But I got her something small, which she seemed to like.  And she got me the Replacements documentary, which excited me.

And the boys seemed to genuinely be happy with their haul, which is a big part of the whole Christmas exercise.  The older hooligan got yet another electric guitar which he’d been wanting, and the younger one got a new bike.  You know, and a bunch other stuff.

Toney made breakfast, and by 10 a.m. I was bored shitless.  This was going to be a long day.  The boys were off with their guitars and new video games. etc., but I was just sitting in a chair, slightly sleep-deprived, and not able to move.  I’d already talked to my parents and brother, and it looked like it was just going to be sitting and staring straight ahead for the next 12 hours.

I suggested to Toney that the two of us go to a movie, maybe to see This Is 40.  The boys wouldn’t even notice we were gone, and it would get us out of the house for a while.

It took some convincing, but she eventually agreed.  And we had a great time.  The movie is really good and funny, and features two of my heros: Graham Parker and Phil Hendrie.  We enjoyed the hell out of it.  I’m glad we went: a rare wise decision.

And last night we had a big traditional Christmas dinner, I cleaned up (it sucked ass), and all four of us watched The Campaign, on-demand.  It was also funny.  I abstained from beer, because I need to get this book project finished, but that’s OK.  I had ice cream instead.

And that brings you up to date on our Christmas this year.  It was pretty great.  How was yours?  Please tell us about it in the comments section below.

Starting tomorrow… guest posts.  All will be from folks who have never written a Surf Report update before, so you won’t want to miss it.  I’ve got some great stuff in the queue.

And, needless to say, if you received an Amazon gift card for Christmas, remember to click-through our links before cashing that baby in.  Here’s a good one to use.  It’s much appreciated, as always.

Wish me luck on this book.  Good god.  I’ll see you guys again on Monday.