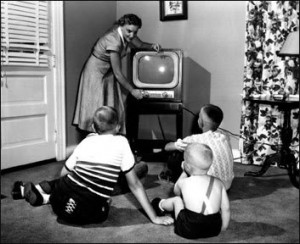 According to this article, more and more people are dumping their TVs and cable/satellite services, and watching whatever they want online.  This, of course, is causing some sphincters to wink.  Specifically: the sphincters of people who make their livings via the old ways of doing things.  Change threatens their livelihood.

I’m sympathetic, to a point.  I worked in the music and home video industries for 17 years, and it was a hell of a ride.  During the last five years, especially, I made great money, and we had a good quality of life.  But, during those five years, the writing was always on the wall.  Everybody knew it was only a matter of time…

So, I understand.  But shit changes.  The music industry made a huge mistake trying to attack and demonize the early adopters of change inside their industry, and succeeded in alienating everyone on planet Earth.  Their approach made otherwise honest people want to stick it to ’em, just for spite.  Well done!

The secret, I believe, is to roll with it, and try to adapt.  Not exactly a revolutionary notion, I know.  But the automatic reaction inside affected industries is usually to try to squash change, and protect the status quo.  It’s a losing proposition.

Anyway, I’m interested in how your TV-watching habits have changed over the past few years.  Is there any difference, from… say, 2005?

I don’t watch much TV.  I’m home every day until 2:00 p.m., and never turn it on.  It doesn’t even occur to me.  Occasionally, the boys will ask me to watch something with them — usually Tosh or Workaholics — and I’ll do it.  And I sometimes watch a movie via Netflix streaming on Saturday nights.  But beyond that… I watch almost nothing.

I’m all about the internet, music, and books.  If I was forced to choose between TV and computer, I’d say goodbye to the television without one second of hesitation.  But, the hooligans watch the hell out of it, so we’re nowhere near becoming a “Zero TV” house.

How has it changed for you, over the past few years?  Do you watch stuff as it’s actually broadcast anymore?  We don’t.  The boys put the DVR through a vigorous workout, and Toney and I sometimes watch things on-demand.  You know, like House Hunters.  We on-demand it whenever we need a fix of “Oooh! Two sinks!!”

So, there you go.  Please tell us about your TV-watching habits.  Also, which would you give up, if you were forced to choose: television or computer?  Are you anywhere near becoming a “Zero TV” household?  And finally, has technology threatened your livelihood yet?  Please bring us up to date, in the comments section below.