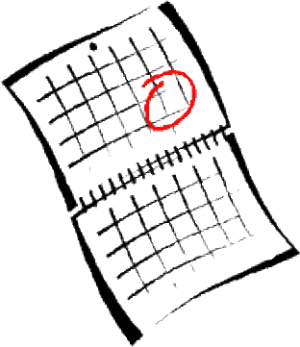 We bought a house in Canyon Country, California, in 1996.  In 2000 we sold it, and moved to Pennsylvania.  And the real estate agent from that original ’96 transaction has sent us a calendar in the mail every year since.  I’m not sure how she knows where we’re currently living, but we’ve received a calendar from her every January, starting in 1997, with her big Glamour Shots face on it.

She also sends invitations to pizza parties a couple of times per year.  We actually went to one of those shindigs before we moved away (now that I think about it:  WTF??), and it was kind of fun.  It was all her once and future customers, drinking to excess and laughing it up.  I wasn’t aware of such gatherings: people who share a real estate agent.  It was bizarre.

But the woman had a motor inside her.  She hustled more than just about anyone I’ve ever met, and I have no doubt she’s a millionaire as a result.  After we bought the house she erected an elaborate sign in the front yard, announcing the arrival of “The Kay Family.”  It was a little embarrassing, and I think it pissed me off at the time.  But I admired the way she operated.  She was ALWAYS working, with a big smile on her face, and also did things a bit differently.

Sure, she was a little crazy.  OK, a lot crazy…  In fact, the real estate agent in Crossroads Road is based on her.  But she was able to harness it, and turn it into a positive.  So far, I haven’t been able to do that.  My crazy is just out there, flapping around.  There’s no harness, no harness whatsoever.  Plus, she works circles around 99% of the human population.

This year’s calendar is hanging near Toney’s computer desk, and I pass it twenty times per day.  And every time I see the agent’s big fleshy airbrushed face smiling back at me, I feel ashamed.  She causes me to take a long look in the mirror, and it’s not a pleasant experience.  I’m capable of so much more.  I know that, and her photo drives it home, again and again.

So, today I made a decision.  Instead of just feeling bad about things, I decided it’s time to make a change.  After I finish this update I’m going to march upstairs, take the calendar down, and throw it in the kitchen trash.  Then I’m going to have Toaster Strudel.  Strawberry!