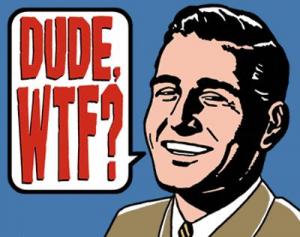 A few days ago I received an email from my FORMER hosting company — HostGator — telling me my sites had been suspended. The reason was unclear, and they didn’t answer my WTF?? email for about 15 hours. I was at work for most of that time, so I was distracted and it saved me from having a full meltdown.

When they did write back, they said traffic to the Surf Report was putting a strain on the shared server, and slowing down other peoples’ sites. They suggested I install a plugin that’s already been in place for more than five years. Beyond that, they had no suggestions on how to remedy the problem.

And just so you know: HostGator advertises unlimited bandwidth, and unlimited disk space. I guess a more accurate statement would be “unlimited (some limitations apply).” Right? How can they say it’s unlimited, and tell me I’m using too much? Also: this site is not exactly The Drudge Report, in terms of traffic. Ya know?

I emailed them back, and again… no answer for a long, long time. My sites were fully-functional, but locked-down by the host. And I was getting nothing but ambiguous and infrequent emails from them.

Finally, they told me somebody had linked to a few mp3 files, which I’d uploaded ages ago. There was a lot of activity on them, and this was causing the extra load on the servers. They gave me the specific file names, and I deleted them. They also requested I make a change with Google, and the rate with which they “crawl” the site. This is all inside-baseball boolshit. But I did everything they asked, and requested they lift the restrictions.

Sixteen hours later… they said nope; not good enough. They had a whole new list of demands, completely unrelated to the first list. They’d moved the goal posts. What the hell, man?? When I joined HostGator, they were the best in the business. I’d had not one second of trouble with them.

I started doing some Google searches, and learned the company was sold last year to some gigantic corporation called Endurance. It’s NOT the same HostGator, and there are complaints about shitty customer service and problems all over the internet. They’d been a beloved company before.

Then I found a guy who wrote about his site being shut down by HostGator, and going through exactly what I was going through. Infrequent, unclear emails… Doing everything they asked, but never satisfying them… It started to feel like an organized hassling campaign.

Yeah, that’s all I needed to know. Screw this. I signed up with a different company — one that currently has a fantastic reputation — and asked the guy who does tech work for me to start moving my sites.

I believe HostGator wanted to get rid of me for some reason, and they succeeded. I don’t understand it. I paid my money every month, rarely contacted them, and everything was going well. At least I thought so. It’s crazy. But I’ll tell you this much… I would steer clear of HostGator, BlueHost, and all the other Endurance hosting companies. This is some weird stuff.

Just to be clear: I don’t believe any of this was personal. I just think I fell into some category that Hostgator decided is hurting their bottom line in some way. What defines that category, I do not know.

But, we’re back in business. If you see anything that’s not working, let me know. During the last 24 hours everything’s been migrated from one server (and company) to another. It always makes me nervous, especially since the old stuff is on an obsolete platform called FrontPage. But, it seems to work out.

Thank you guys for your patience. This time it had nothing to do with the Russians. Their vodka-hands are clean, this go-round.