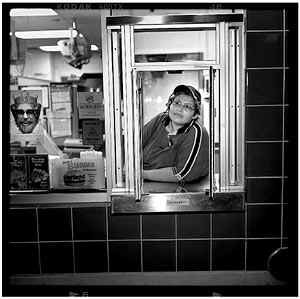 Toney and the boys have been away for three days now, and it’s starting to take its toll.  All the easy-cook food is gone by this point, and I’m living exclusively on take-out.

Plus, it’s just kinda lonely around here.  I’m all the time bitching about the noise and chaos, but now I’m missing it.  Oh how I wish the older Secret was in his bedroom, right above my head, playing the bassline from “Taxman” over and over and over, at window-rattling volume.

Toney informs me, via international telephonic hook-up, there’s plenty of stuff around here I could “make” for breakfast and lunch.  But let’s get serious.  Make?  Man, I get irritated when the Marie Callender frozen meal has two-step directions.  I actually seek out the ones that only require one big nuking session, without all the complicated stirring in the middle.

So, all my meals will be passed to me through windows, until this nightmare is over.

At work last night I had some kid with a mohawk pick me up a so-called hoagie (I still have a problem with that word), from a local pizza joint.  He orders from there nightly, and claims to have never eaten a fruit or a vegetable in his life.  I laughed at that, but then reviewed the past few days of my life…  And I got sad all over again.

Andy’s hating this crap as well.  He ends up being home alone for a full twelve hours, daily.  When I get home, in the middle of the night, he’s all tensed-up like a garage door spring.  He starts running up and down the street, yelping like he’s trying to shit a baloney wrapper, and slinging urine in every direction.

I hope tonight’s not the night it becomes too much for him.  I really do.

Yesterday, while driving to Burger King, an old man pulled out in front of me, and I had to STOMP on the brake.  Andy, who was in the passenger seat (dog is my co-pilot), went airborne and did a full header into the dashboard.

And I don’t think the other driver ever saw me.  Even after I went sideways in the street, laid on my horn, and hollered shocking profanity, the old guy (who looked like a giant prawn in Harry Caray glasses) just continued like nothing out of the ordinary had happened.

Unbelievable.  And Snoop Manny Mann took the brunt of it, the poor guy.  Like I said before, Andy’s definitely getting the short end of the stick here…

But everyone will be back tomorrow, and life will return to “normal.”

We’re planning to visit Knoebels one more time before school starts – next Thursday to be exact.  And afterwards we’ll be going here for, um, dinner.  Steve recommends it, and will probably be joining us.  So, there’s fun and brewpubs on the horizon, to keep me going.

And I know this one is kinda short, but I also uploaded a review of the Verizon VZ Navigator service today, at Suggestaholic.  So, check it out.

And I gotta go.  I need to buy gas on my way to work, and that’s almost as aggravating as stirring…