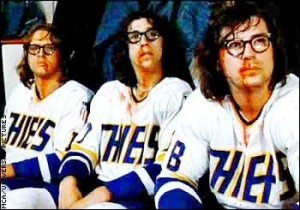 We went to Cracker Barrel for dinner last night, before the big hockey game.  And they were pushing a new menu category:  skillet meals.

As stated elsewhere, I’m a big fan of having all my food combined into a big ol’ mess before me.  So, even though I generally reject hype, I was intrigued.  One of the offerings, in particular, sounded mighty good to me.  It featured chicken, broccoli, crumbled-up Ritz crackers, hashbrown casserole, and liquefied cheese.

I didn’t really want to give our waitress the satisfaction of believing she talked me into something, but all that melted-down cheddar made it difficult to resist.  So, I told her I’d take what she suggested.  “Excellent,” she answered.  Do they work on commission?

My “Fireside Country Skillet” came with a tossed salad, and a platter of biscuits and cornbread.  A nice way to kick-off a feeding…  But when she brought my main course, I thought it was WAY too small.  It seemed like their so-called skillets are actually flattened-out coffee cups.  The mess o’ food inside looked good, but my inner-sensors told me there needed to be roughly 100% more of it.

She asked if I wanted more sweet tea, and why is such a question even necessary?  I hadn’t even started my meal yet.  Just keep ’em coming, sister.

I sighed at the sight of the pitiful offering before me, and ripped into it.  And man, it was good.  There were big hunks of white meat chicken, cooked but not overcooked broccoli, and all manner of tastiness.  It was a wise entree choice, despite the social pressure.

And it also turned out to be almost enough food.  I could’ve gone for another three or four forkfuls, but it wasn’t nearly as skimpy as I’d first believed.  It was some kind of optical illusion with cheese sauce.

If you’re a food-mixer like I am, I highly recommend the Cracker Barrel skillet meals.  I think there are three of them available at the moment, but one features mushrooms and I’m not much into the fungus.  But I’m ready to start rotating between the other two, until full burnout sets in.  Oh yes I am.

As we were leaving, the boys asked if they could get a candy from the store out-front.  Toney said yes, and asked if I wanted anything.  I declined for some reason, and started looking around while she dealt with the Secrets.

And they have something really cool there…  It’s boxes, roughly the size of hardcover books, filled with a selection of candies from various decades.  They had the 1950s, 1960s, and 1980s.  Apparently the ’70s was sold-out, which is the one I’d want.  I’m curious to see what’s included.  Zotz, maybe?!

While walking to the car, I was telling Toney about the retro candy collections, and she said she had a surprise for me.  She reached into a Cracker Barrel bag, and pulled out a long string of…  cherry Zotz!

I couldn’t believe my eyes.  It had probably been 25 years since I’d had one of those babies, and used to love ’em.  She also bought a rope of strawberry and watermelon.  I don’t think they had watermelon back in the day, but that’s OK.  I popped one of the cherry flavored Zotz into my mouth, and it was exactly like 1978.  Same size, same flavor, same everything.  I nearly wept.

Already, the night was a huge success.

The Wachovia Arena was just a few hundred yards from the restaurant, and the parking lot was already starting to fill-up when we got there.  A team of morbidly obese coal-crackers in fluorescent vests dictated where we could park our car.  I did as I was told, and we went in search of the will-call window.

The tickets were waiting for us (thanks again, Brian!), and we zig-zagged our way through the crowd, eventually finding our seats.  They were located halfway up the lower section, near one of the goals.  Very nice.

Once we were settled, I asked Toney if she wanted a beer.  Absolutely was her reply, and I told the woman at the adult beverage trailer I’d take two Yuengling drafts.  “Eleven dollars,” she said.  “HOLY SHIT!” I shouted, involuntarily.

I realized, at that moment, Toney and I would only be having one beer each.  At least until we got home…

The game itself was fun.  I don’t know much about hockey, and was amazed at the number of sticks shattered during play.  I wasn’t aware that happened so often.  In fact, it never occurred to me that it ever happens.

But every ten minutes or so we’d hear a loud crack, and one of the players would drop their ruined hockey stick to the ice.  They’d just get rid of it, wherever they happened to be, and someone would have to skate out and retrieve the thing.

One of the Penguins players has a last name of Satan (pronounced suh-tan).  And clearly, he’s the most popular member of the team; every time the announcer mentioned his name, the crowd went wild.  Those people just couldn’t get enough of ol’ Satan.  Personally, I’m partial to Hitler (with a silent T).

There were plenty of fights, small skirmishes really, which never failed to bring the crowd to its feet.  At one point there was a splattering of blood across the ice, and the Penguins’ goalie used his blades to create bloody slush, then dragged it to the edge of the ice.  And he did this like it was no big deal, just something that needs to be done from time to time.

The shit is brutal.

The action was fast and physical, and fun to watch.  When the Penguins scored a goal, however, I was almost jolted into cardiac arrest.  A full-blown locomotive horn went off, just impossibly loud, and I’m sincerely amazed my rectal seal didn’t blow.  Sweet Maria.

Following the incredible blast of noise the crowd stood, as one, and started in on some kind of freaky ritualistic response.  There was chanting, hand signals, and glazed looks in everyone’s eyes.  It was all choreographed, and automatic, and slightly disturbing.

But overall, it was a good time.  It certainly wasn’t boring, and even though there’s an insane length of time between periods, the time went by quickly.  Not once did I look at my wrist, where a watch should be.

So, that was our night on the town.  And now that we have one game under our belts, I have no doubt we’ll return.  It’s a good way to spend an evening with the family.

Here are a few pics I snapped during the game.

As for the Question of the day…  I don’t really have anything specific.

How about your favorite stadium food?  I feel silly eating anything besides a hot dog, or popcorn.  I always see people scarfing down full meals at sporting events, and that’s not something I could do.  Are you partial to any certain foods traditionally served at stadiums, and such?

And what’s the most expensive beer you’ve ever purchased?  Bill and I had a few Heinekens at a bar inside the Beverly Hills Hilton, and I think they were about eight dollars each.  As best as I can remember, those overpriced brews hold the current record in my world.  What about yours?

Also, what candies should be included in the Cracker Barrel 1970s collection?  Besides, of course, Zotz?

And that’s gonna do it for today, boys and girls.  I won’t be able to update tomorrow, but I’ll shoot for a quickie over the weekend.  I can’t promise anything, but I’ll try.

I hope you have yourselves a fine, fine day.