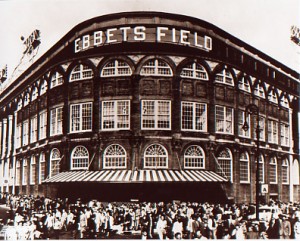 As I emerged from the subway station in Brooklyn, I saw a sign that reminded me of a stoopid joke I heard years ago:

Q: What do Brooklyn and pantyhose have in common?
A: Flatbush

Yes, we’re all buckled-over in laughter now, huh?  Anyway, I was apparently in the Flatbush section of Brooklyn, and made a mental note to investigate the possibility of making a pilgrimage to the former site of Ebbets Field, later in the day. It had to be nearby, I knew.

In the meantime, I was supposed to call Jenny, my agent, as soon as I got off the train.  I was running about fifteen minutes behind schedule, so any exploring would have to wait until later.

Jenny apparently lives and/or works nearby, and was there within five minutes.  Despite her back pain, she was very upbeat and friendly.  When my back hurts I feel like telling everyone to ram it deep and on a slant.  But if she felt that way, she’s very good at hiding it.

As we walked toward the restaurant, Jenny told me that years ago two planes collided and a large passenger jet crashed into the middle of this neighborhood.  Here’s some info on it, and here are a bunch of photos.  Pretty amazing.  I looked around and didn’t see any obvious scars on the buildings, but apparently a few still exist.

We had lunch at a Cuban restaurant, and I was suddenly wheezing and suffering from the early onset of kazoo-neck.  What the hell?  I’d been fine all day, but now my hay fever was kicking-up something fierce.  Was I allergic to Brooklyn?  Probably not, but it seemed that way.

We ordered our meals, and began talking about my plans, and how I should proceed.  She asked how Crossroads Road was coming along, and I admitted that it’s selling well, but not great.  She reminded me that promotion should be yet another of my full-time jobs.

This was my first time meeting Jenny face-to-face, but I was already very fond of her.  She’s exactly the kind of agent I need:  funny, smart, not afraid to voice an opinion, and down-to-earth.  I don’t want to burn any bridges here… but she’s almost the exact opposite of what I had before.  I feel very lucky to have her by my side.

“What’s wrong with your eyes?” she said at one point, and I tried to blow it off.  What am I, Nostrils now?  Will I need to start carrying a puffer soon?  Sheesh.  I was struggling, but trying to hide it.  And she was suffering from back pain, and probably trying to put that out of her mind, as well.  We were the walking-wounded, eating Cuban food in Brooklyn.

We got some things accomplished during our lunch meeting, and I’ve decided what my next project is going to be.  I’m planning to start work on an outline, notes, etc. right away, and get into the writing once school cranks-up again.  During the summer I’m going to focus most of my energy on Crossroads Road, and trying to make complete strangers interested enough to read it.

So, I came away from it with a battle plan, and that makes me feel better.  I don’t like being adrift…

We said our goodbyes near the subway station, and I told her I was going to do a little exploring before returning to Manhattan.  “You can probably buy some Benadryl at one of these stores around here,” she offered.  I guess I wasn’t doing a very good job of masking my weird hay fever flare-up?

I found a shady place on the street, and took out my phone.  Within roughly one minute, I had the address of the old Ebbets Field, and typed it into Google Maps.  Just 1.8 miles from where I was standing…  Huh.  That’s not very far, but not exactly right around the corner, either.

I thought about it, and decided against such an adventure.  I felt really weird, and knew that at the end of my two-mile walk, I’d just be staring at a big apartment building.  That’s what they built on hallowed ground…  Check it out.

I just walked around the neighborhood, and looked at the old brownstone apartments.  Very cool.  I tried to imagine how it was during the 1940s, and it wasn’t too difficult an exercise.  Except for the modern cars everywhere, I have a feeling things looked roughly the same.  Roughly the same, with kids playing stickball in the street.

I took the train back to Port Authority, and would have found a bar under normal circumstances.  But since I’m on an almost month-long no-beer streak, I decided against it.  It was about 4:30 now, and I felt like I’d been beaten with a pillowcase full of new potatoes.  So I just went downstairs and boarded a bus back to Scranton.

And it was packed…  What the hell, man?  I don’t understand why so many people shuttle back and forth between those two places.  Granted, most would undoubtedly get off in the Poconos (also baffling), but many would go all the way to the end of the line.  Like me.

There weren’t too many open seats, and I sat down beside a guy wearing an Amazon dotcom t-shirt, windbreaker, and baseball cap.  After I got my big ass situated, I said, “So, do you work for Amazon, or just really, really like them?”  He laughed, but made it clear that he wasn’t interested in any lengthy chats.  And that’s cool.  I don’t like people either.

Immediately I fell asleep, and kept jerking awake.  I was paranoid about snoring.  I had it in my mind that I was clear-cutting timber, just wide-open.  I don’t know if it was true, but every time I drifted off I’d get self-conscious in my sleep.  Yes, I’m riddled with neuroses.

After we shed 75% of the passengers in the Poconos, the bus broke down.  I don’t know what was going on, but the driver pulled into a parking lot and the engine was revving way up.  “We can’t continue in this bus,” he announced across his shoulder, and every person simultaneously groaned.

The idiot white trash couple seated behind me commenced to bitching, and never stopped until the replacement bus arrived and we were on our way again.  “This is fucking bullshit,” they kept repeating, in front of their 12 year old son.  I wanted to turn around and tell them to shut the hell up, but suspected that all three of them could kick my ass.

It wasn’t a long wait, and within fifteen minutes or so, we were back on the road.  And when I got on the new bus, I was rid of ol’ Amazon Gift Shop, and snagged a seat without a partner.  Ahhh… much better.

We arrived in Scranton around 7:30, and I went to Wendy’s for a quick dinner.  And I looked around at all the people wearing enormous t-shirts and flip-flops and filthy baseball caps…  Man, oh man.  It didn’t take long for my New York trance to be broken.

I was back in the “real” world.

Next time I’ll get back to the regular stuff.  Thanks for sticking with me through this trilogy…  Nancy and the gang will be arriving later tonight, so I don’t know if I’ll be able to update tomorrow.  Probably not, but who knows what might happen.

So, I’ll see you guys as soon as possible.