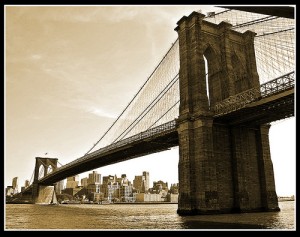 I had copious notes on how to get from the subway station to Duff’s apartment, but couldn’t latch on to a single landmark mentioned in any of them.  The streets and businesses that appeared on the papers I had in my hand didn’t seem to exist in reality.  Had I gotten off at the wrong stop?  It was certainly possible.

I looked around, and had no idea where I might be.  A small twinge of panic took hold.

But then I remembered:  my phone.  I stepped out of the flow of foot traffic, tapped the Google Maps app, typed in Duff’s address, and asked for walking directions.  And it took me straight to her front door.  The much-maligned smartphone comes through yet again!

There was a doorman there, dressed like a British naval officer from the 1700s.  He opened the tall door for me, and after the concierge was given the OK by phone, I was directed to the elevators.  Duff was waiting for me when I reached her floor, and we went to her apartment.

It’s a cool place, with a great terrace overlooking the New York streets.  Towering building are all around, and I have a feeling it’s especially breathtaking at night.

Lori was already there, and we sat around drinking coffee and talking for ninety minutes.  All of us have writing projects in various states of completion, and we discussed those.  And they both had some really interesting and unusual suggestions on how I might market Crossroads Road.  One, in particular, seems like a winner — and it’s something that would have never occurred to me.

It was fun.  I don’t often get the chance to spend time with other writers (I still feel a little pretentious calling myself a writer, just so you know), especially folks as accomplished as Duff and Lori.  We might do an internet project together, and the premise (by Lori) is hilarious.  I hope we can get it off the ground.

During my visit, Duff received two phone calls.  The first was to inform her that she’d won a Kindle in a raffle, at her kid’s school.  And the second was from — get this — Bill Murray.  Yowza!

You know, when my phone rings it’s rarely news of fabulous prizes, or a comedy icon “just checking in.”  I do, however, receive an inordinate number of text messages from friends keeping me up to date on their especially remarkable bowel movements.  How did I become the go-to guy for such things?  I’m unclear.

Anyway, the stop at Duff’s apartment was a lot of fun for me.  I hope they enjoyed it, too.  It was a million miles from my everyday life, and I had a great time.

Duff walked with me to the subway station, where I would catch the train to Brooklyn.  We continued talking en transit, and had an interesting conversation about independence, and the value of being your own boss.  I wish we could have further explored the subject; she’s a force to be reckoned with, and inspirational.

Inside the subway station, she told me about going to the ballet the previous evening.  I asked if she’d ever seen Black Swan, and she said, “Oh no, I don’t like movies with a lot of nail clipping scenes.”  That killed me.  And I also know how she feels.

The train approached, we said our goodbyes, and I jumped aboard.  Well, I walked aboard…  I didn’t do a standing broad jump.  You know what I mean.  It was packed, and I had to stand beside a pole.  It was quite a rambunctious crowd, and there was a lot of noise.  Much better than the morgue-like silence on the bus from Scranton, I must say.

As we made our way out of Manhattan I saw a building by the river, with “Watchtower” written on the side of it.  It’s that religious magazine that people are always trying to give away, door to door.

And I remembered Mark Maynard telling me about going to that building, years ago, knocking on the door, and trying to give them a copy of his Crimewave USA magazine.  You know, turning the tables on ’em.  As I recall, they wouldn’t take it from him, and were quite rude.  Heh.

I stood there, hanging on to my pole, as a group of teenagers raised a ruckus down the way.  It appeared to be the mating ritual… lots of awkward flirting.  I had to avert my eyes.

Seated across from me was a large black woman who, at one point, reached into her purse, took out a stick of deodorant, swabbed her pits with it, and absentmindedly put it away.  Then she sighed with boredom, and continued riding along.

I just blinked real fast, and never changed my expression.

When I reached my stop I exited the train with another batch of copious notes, hoping I’d be able to find my way without too much trouble.  So far it was going well, but I knew better than to get cocky.

And that’s where I’ll pick up the story tomorrow.  Just one more installment in this New York Trilogy…  I’ll tell you about meeting my agent for the first time, and also the eventful bus ride home.