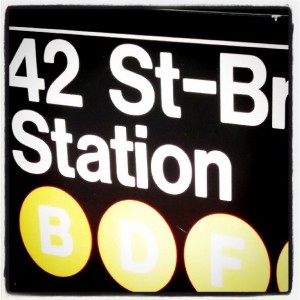 It blows my mind that a commuter bus runs between Scranton and New York City, but it does.  Every hour or so, each weekday, and a little less frequently on weekends.  Apparently people live all the way over here, and work all the way over there.  It’s crazy.

In any case, I caught the 7:20 a.m. bus on Friday, and there were only 23 of us in the beginning.  Lots of breathing room, and reasonably comfortable…  I broke out my iPod and listened to the previous evening’s Clive Bull Show, and all was right with the world.

As we chugged down the highway, I noticed an old-school Jew across the aisle from me.  He was wearing the full religious uniform, and reading from a battered book with Hebrew writing all over it.  Hey, whatever.

I closed my eyes and listened to people in London argue about local issues, and hoped I could find everything I was supposed to find during the day.  The New York subway system is easy to navigate for people who know it, but not so much for visitors.  It always works out, but I’m never 100% sure I’m on the right train, or going in the right direction.

When I opened my eyes again, the Jewish dude was wrapping a long strap around his left arm.  WTF?  I kept watching, and he then removed a small leather case from his bag, containing what looked like a block of wood on another long strap.  He attached this to his head, so the block was situated up-top.  Then he started reading frantically from the book, moving his lips and rocking backward and forward.  What in the everlovin’?

I admit I know next to nothing about… well, all religions.  But what’s the story with the strap-on head block?  And also, the leather strap he had wrapped tightly around his left arm?  I sincerely have no idea.

We continued, and — once again — everything went circling down the ol’ crap-catcher once we reached the Poconos.  We pulled into a bus station there, and it looked like 500 people were waiting to board.  Grrr…

Every single seat was filled, including the one to my left.  Some guy with an earring in his lip, and ludicrous sideburns, flopped down beside me.  I was now mashed against the glass, and feeling the early onset of a claustrophobic event.  It was like astronaut training.

Ol’ fishing tackle lips immediately began dozing off, and at one point I thought he was going to put his head on my shoulder.  This has happened before, and I have no problem shrugging those people awake.  I’m not hard to get along with, but male-on-male napping is a little over the line for me.

My heft was packed into that tiny space, and the road got progressively worse as we neared NYC.  We were hitting gaping potholes at full speed, over and over again.  I was afraid the fillings might start working their way out of my teeth.

And it smelled like somebody on that bus needed to buy the Video Professor course in ass-wiping.

Then my phone rang, and it was my agent.  We were supposed to meet for lunch near Greenwich Village, but she said her back was hurting her, and asked if we could reschedule.  I told her no problem, but she was under the impression I was staying in New York for a few days.  After I told her it was only a day-trip, she asked if I could come to her neighborhood instead — in Brooklyn.

That meant another opportunity to get on the wrong train, and unwittingly end up in the middle of a dispute between two warring drug factions.  “Seriously, fellas… I don’t have a beef with any of you good gentlemen…  I’m just trying to find the Cubana Cafe.”

But I wanted to meet with her, and told her I’d be there.  God willing…

Eventually we arrived at Port Authority.  Because of traffic, and semi-frequent stops, the trip lasted for three hours — at least an hour longer than it does by car.  But I hate driving over there, and paying for parking and all that crapola.  The bus only costs $45, and eliminates much of the stress.  Not all of it, of course, but a good portion.

My first stop was to be Duff’s apartment, in Greenwich Village.  Duff, her friend Lori, and I were going to discuss a future project we might undertake (hilarious), and also talk about the marketing of Crossroads Road.  Lori is a successful writer, and between the two of ’em… well, they’re great people to have in your corner.

So, I went downstairs and tried to make sure I chose the correct train.  I let one go by without boarding, because I wasn’t sure, but finally took the leap.  Heeere we go… I thought.

And that’s where I’ll pick it up tomorrow.