In the new episode of the world famous Jeff Kay Show podcast, I made a half-assed attempt to rank the Big Five fast food chains. You can listen here, or wherever you harvest your podcasts. Here’s the summary:

In this one I talk about the Polar Vortex, our younger son’s upcoming visit to my parents’ place in Florida, our older son getting his bank card number stolen and used to buy shoes in California, a bit of exciting fast food news I heard last week, some crazy shit that happened to me in a local Taco Bell, and my controversial rankings of the Big Five fast food chains. I hope you enjoy it. Thanks for listening!

I’d like to invite you to also rank them from favorite to least favorite. I chose what FEELS like the Big Five, but I did no research. I mean… let’s be serious. No, I just went with five fast food joints that seem to be located off every interstate exit with a food cluster. You know what I’m talking about, right? The food cluster? And I came up with these five, in no particular order:

There might very well be others that are bigger. Like Subway, for instance. Or maybe even Domino’s. But I don’t really put them in the same category for some reason. Also, I left out Chick-fil-A and Five Guys, and places like that. Again, they don’t feel like they belong alongside McDonald’s. I completely forgot about Arby’s, and they might be worthy. But I don’t see as many Arby’s as I do the others. Am I wrong?

In any case, I could be a complete hack and require you to listen to the podcast to get my rankings. But I’ll share my list here, and if you’re interested… you can listen for the rationale. Oh, I have thoughts and opinions. There’s other fast food news and anecdotes in that episode too. I think it’s pretty good. You know… relatively speaking. Anyway, here’s my ranking:

If I were to add Arby’s I’d probably put it at #3, and shove BK, McD, and KFC downward. What do you have on this important issue? And if you feel the need to post “I haven’t had fast food since 1987” or whatever, just save it. Sheesh. I don’t need any shaming, goddammit. I do that to myself automatically and by the hour.

And before I pull the plug on this quickie, I’d like to know about your favorite DEFUNCT fast food chains. I’m not talking about some local place, I mean true chains that attempted to compete with the big boys. One jumps immediately to my mind: 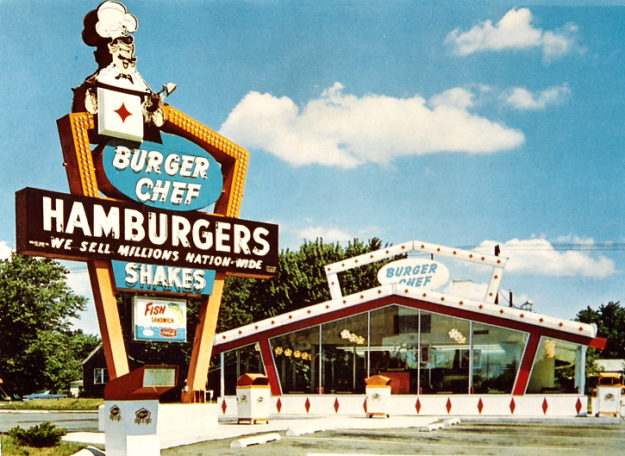 I mean, Burger Chef was a real player. They were all over the place and considered (in my mind, anyway) to be on the same level as the Big Five. Their Big Mac was called the Big Shef, which is admittedly questionable. And they had a “works bar” where you could add whatever toppin’s you wanted. They were good… not great. Just like everything else on the list — except maybe Wendy’s. 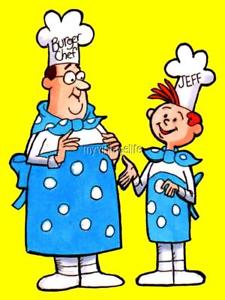 The only downside to Burger Chef? Their cartoon spokesmen, who appeared in all their ads, were named Burger Chef and Jeff. So, that didn’t bode well for a Jiffy-Pop haired youngster also named Jeff. I heard that shit all the time, at least once a week. You know, ’cause people are simpletons?

Another largeish and very real chain that legitimately competed with the big boys was a place called Rax. They were like Arby’s, almost exactly, and possibly owned by the same people that owned Hardee’s, which I also forgot about until right now. Anyway, I used to eat at Rax sometimes. Their restaurant had a sunroom if you can dig it. It’s hard to explain… But they weren’t bad.

OK, I’m running super-late and need to call it a day here. If you’d like to rank the Big Five, please do so. Also, if you have anything on defunct fast food chains, the ones who truly attempted to take on the big boys and lost, please tell us about that as well.

Here’s to a great week for all of us. Cheers!