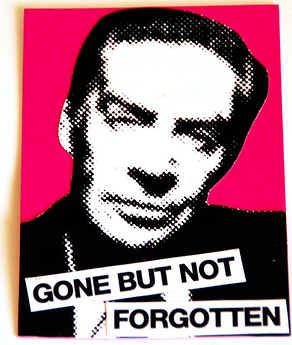 I read somewhere there’s a British version of Law & Order in the works.  Law & Order: UK is what it will be called, and I wouldn’t mind checking it out, once it starts airing; I’d like to see who they choose to play EuroScrote.

As interesting as the new show sounds, though, how much more can they realistically wring from that franchise?  Isn’t it fairly well spent at this point?  Sadly, I suspect we might already be past the sell-by date.

But I’d like to do my part to keep it going, and I’m sure many of you feel the same way.  So, I’m going to recommend a few new variations (in TV Guide format), and turn it over to you.  Maybe we can come up with an idea, or two, which will keep Law & Order chugging along for another decade or more?

I’ll get the ball rolling…

Law & Order: Scranton After a cuppa two tree prostitutes are found murdered in the city, Detective Scrotekowski zeroes in on a suspicious porketta vendor from Throop, in an episode titled “Murder, Or No?”

Law & Order: Hooterville Floyd Smoot comes under suspicion when a Haitian immigrant is found savagely beaten near the railroad tracks outside Crabwell Corners.  An uncooperative Alf Monroe holds the key to the mystery.

Law & Order: The Villages After a man is discovered murdered near a golf cart overpass, detectives learn the victim had many enemies – due to continuous bragging about his expensive titanium replacement hip.

Law & Order: Pleasantville Detective Scrotenreiter is introduced to his new partner, and is surprised to learn he’s in color.  The contentious pair struggle with their personal differences, while trying to capture the notorious Mutilator of Whores.

So there you go…  I wanted to do one called Law & Order: Bumfuck, but couldn’t really come up with a concept.  You guys can take it from here, and maybe together we can save a great old TV show?

And since we’re talking about classic television today, check this out.  It’s the cast of the Gunsmoke radio show, which preceded the long-running TV program.

It starred Floyd the Barber as Doc, Cannon as Marshall Dillon, Mayberry’s Mayor Stoner as Chester, and a hooker with a heart of gold.

When the TV show was proposed, William Conrad reportedly auditioned for the part of Matt Dillon.  And can you imagine Frank Cannon on horseback?  Heh.  They probably would’ve had to use Clydesdales, or concrete “horses” on rollers.

I read somewhere that Conrad never really got over the fact another actor became associated with the part of Marshall Dillon.  He felt that he’d created the character, and the whole thing supposedly bothered him for the rest of his life.

And speaking of great TV, I’m in the process of watching the John Adams mini-series.  Good stuff.  I had a little trouble buying Paul Giamatti as a founding father, but he somehow pulls it off.  I recommend it.

One scene I could’ve done without, however:  Adams having awkward and grunting sex with his wife, while looking like Uncle Fester, full-on.  I don’t think my face fully de-grimaced until morning.

Other than that… excellent, so far.

Now let’s hear your L&O ideas!  It’s up to us to save the program, and the clock is ticking.