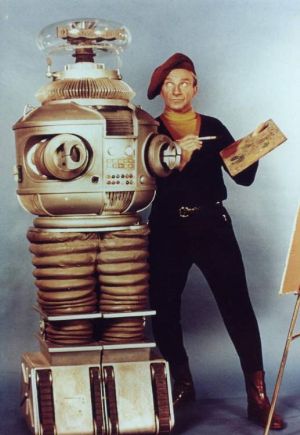 Last night was the first time I’ve struggled a bit with my no beer pledge.  We were finished with dinner early, the weather was absolute perfection, and I REALLY wanted to walk to the yuppie bar with Toney and enjoy a few over-hopped microbrews on the patio.  But I stayed the course, thank you very much.

I don’t even know how long it’s been, but a long time.  Many weeks.  It’s good.  I feel better, and my bank account is happy about it, as well.  I’m going to keep going, and see where it takes me.  No grand proclamations, or anything…  I know better than to make any grand proclamations at this point.

This morning I caught a glimpse of myself in the bathroom mirror, while stepping into the shower, and for a split second thought it was the robot from Lost in Space.  My brain was thrown into confusion, because a robot should not be in our bathroom.  Ya know?

I’m also reaching a point where my mother should probably take me to the mall and let me pick out my first bra.  It’s a rite of passage, I hear.  And I’m almost there.

So, I need to drop fifty pounds.  Have any of you lost that much weight, or more?  How did you do it?  Cocaine?  Meth?  How?  If you have any sane suggestions for me, I’m all ears.  Well, ears and quite a substantial gut.

However… I’m not eating slimy salads for the rest of my life.  I’ve been down that road, and it’s not happening again.  It’s what I mean by “sane suggestions.”  If I have to walk around starving, yet DREADING, mealtime, it’s just not going to work.  I’ll say ‘funk dat’ before Day 3 has ended.

I know a guy who lost massive weight in six or eight weeks, on something called the Insanity Workout.  Apparently there’s an infomercial for this deal?  I wouldn’t know, since I never watch TV.  But he’s doing it, and he’s skinnier every time I see him.

A few days ago I asked him about it, and he told me it’s super-intense, and he’s actually missed two days of work because he was so fatigued he was unable to get out of bed in the morning.  What the hell??  Perhaps he’s overdoing it a bit?  He doesn’t strike me as the Nostrils type, but what do I know about it?

I won’t be doing the Insanity Workout, and I won’t be eating slime salads.  I’d rather stay… portly, than endure that kind of nonsense.  There’s got to be a better way, right?  Help me out, Surf Reporters.  Tell me how to get rid of fitty pounds (the equivalent of a 2nd grader), without going the Jack Bauer torture route.

Also, if you have any personal weight loss or no-beer stories to tell — good or bad — please share.

And I need to go to work now, on my day off.  Man, that really broils my brisket…  It’s exactly the last thing I want to do today.  Oh well.

I know I owe you guys a Nancy update, and will try to get ‘er done on Saturday/Sunday.  Watch your email inbox for details on how to access this super-secret document.  You know, if you’re a Surf Report VIP…  If you’re not, well, it’s your fault, not mine.

Also, since I’m divulging too much information today, I thought I’d share a current photo of myself — which will possibly accompany an upcoming newspaper interview.  Here it is, in all its gray-haired glory — a rare peak inside the Surf Report compound.