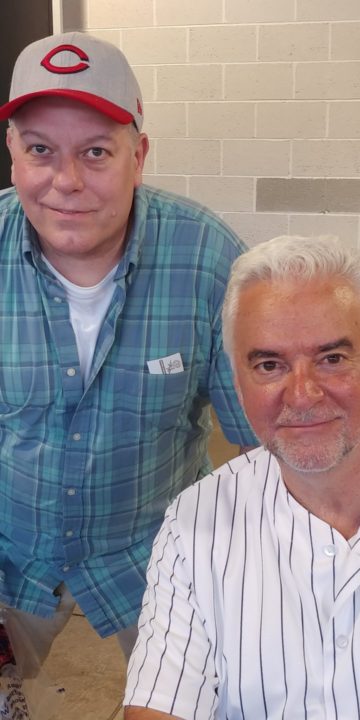 Over the weekend I had a brief encounter with John O’Hurley, who played J. Peterman on Seinfeld. It consisted of the following:

Me: Hey, would you mind if I get a picture?
Him: <silently signals for me to fall into position>

I don’t believe he actually said anything to me. He might’ve grunted an acknowledgment when I thanked him, but nothing beyond that. He wasn’t rude, he just wasn’t opening any doors to conversation. And who could blame him? I certainly don’t. Can you imagine the stupid shit people say in situations like that? It would be maddening. So, I got my photo, thanked him, and extracted myself. It was my gift to him.

This was at a minor league baseball game, by the way. He was there making a personal appearance, presumably for an envelope full of cash. How much would a person of Peterman’s stature be paid for something like that? I’d be interested in knowing, for some reason. He was there from the top of the second inning to the bottom of the sixth. Then he went on the field and sang “Take Me Out To The Ballgame” during the seventh-inning stretch and hightailed it out of there, I’m sure. It was hotter than Satan’s zipper, on top of all the other nonsense.

I’ve met a few celebrities in my life, including many baseball legends at minor league games, not unlike the ones I attended this past Friday and Saturday nights. Most fell into the Peterman category… not openly rude, but just trying to get through it. When I was a kid that was disappointing to me. I thought they’d be friendly and warm and loving every minute of it. Ha! You live and learn, as they say.

Here’s a breakdown of some of the baseball players I met as a Jiffy Pop-haired youngster, and the categories I’d place them in:

There were others, but those are the ones I can remember off the top o’ my head. Hank Aaron was ridiculous and was also sucking down cigs, which was weird. And Willie was not nice, either. Mickey Mantle was indifferent, and so was Sparky. Those kinda stung a little. I wanted more from both of them. Oh well.

On a more positive note: Bob Feller and Satchel Paige were an absolute delight. They seemed to be having fun and enjoying it as much as we were.

I also met a few musician heroes through the years. I’d put them all into the Peterman category. Paul Westerberg seemed ill-at-ease, but was trying to be friendly. He was making an effort, which I appreciated, but clearly didn’t want to be there. Nick Lowe was the friendliest to me, but I saw him be kind of a dick to a Tower Records employee (heh). He was also drinking bottles of Corona at 10 am, which seemed odd. And Iggy Pop fell dead-center in the Peterman column. Just trying to get through it…

Those were the ones that meant the most to me. I met a bunch of others, being in the business for all those years. But the Big Three for me is Paul, Nick, and Iggy. So far.

What do you have on this one? Have you ever met someone you admired and they acted differently than expected? Please tell us about it. I’m interested in the rude bastards, as well as the super-nice ones. Please bring us up to date on it. Oh, I almost forgot… I also met a couple of writers I admire, and both were exceedingly friendly: Richard Russo and Harry Crews. Those were at book signings at Oxford Books in Atlanta. And, of course, my friend Karen Duffy is one of the nicest, coolest people in the world! What do you have on this? Please share your celebrity encounter experiences in the comments.

And I uploaded a new podcast episode late last night if you’re interested in such things. You can listen below, here, or wherever you get podcasts.

I’m going to a show in Philadelphia on Thursday: Chuck Cleaver and Lisa Walker of the band Wussy. Should be fun! Except for the Philly traffic. Ugh. My tolerance level, at this point, is greatly depleted.