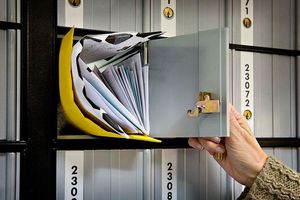 Remember when I told you about the post office inexplicably jamming a cardboard plug into my PO Box, and sending back all my mail for about three months?  Do you recall that rant?  My key still worked during that period, nobody said a word to me about it, yet they were returning to sender like a sumbitch.  My fee was paid-up, and they couldn’t explain why it happened, once I brought it to their attention.

But I let it slide.  I like most of the people who work there, and shit happens.  I realize this better than most people (dammit!), and screaming and acting like a crazy person isn’t going to change that fact.

However…  I went over there a few days ago, to pay the fee on the box.  And they tried to charge me a fine, because I’d let it lapse for a few days.  A fine — after they totally screwed me up for three months!  The six month fee is $29, but they wanted $50 from me to bring it current.

Yeah, I flipped out.  And when the smoke settled, they’d waived all the extra charges.  So, we’re even.  I cut them a break, they cut me one, and we’re starting with a clean slate.

A couple of things, though…  The six-month PO Box fee has gone from $19 to $23 to $29, in about a year.  What the hell, man??  Plus, it’s like 1949 in that place.  Except for the computerized cash registers, I have a feeling things run EXACTLY the same way they did during the Truman administration.  Is there another ongoing business concern that’s stuck in a bigger time warp than the post offices?  I certainly can’t think of one.  Sweet sainted mother of Grady the Cow!

The whole thing was quite unsatisfying, even though I “won” in the end.  They know me there, but don’t give a shit.  And I had to act like Sunshine to get a little justice.  I don’t like being an asshole, even when I feel like I’ve earned the right.  Plus, I kinda caused the problem.  Right?  If I’d just paid the bill when I received it, none of this would’ve happened.

Have you had any altercations with retail folk lately?  Did you get any satisfaction?  Or did you over-think it like I did?  Please tell us about it in the comments.  In fact, it doesn’t even have to be lately.  Any stories along those lines will work, from any era.

And I know this one is abbreviated again, but it was almost nothing but crickets.  So: better than nothing?

Now playing in the bunker
Treat yourself: “How Green Were the Nazis?“