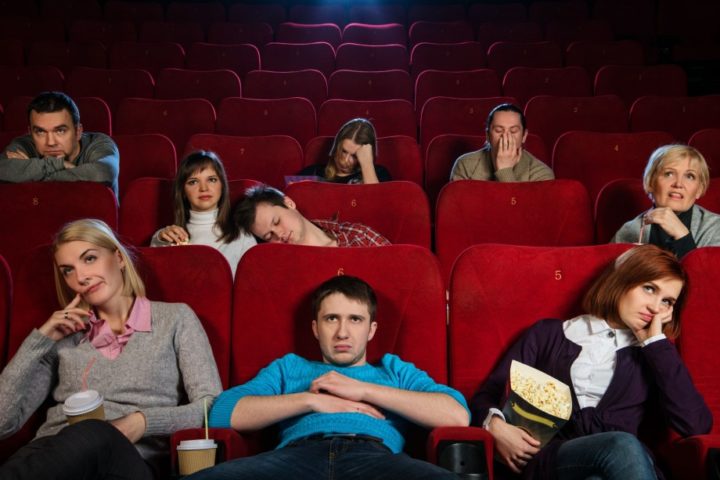 Before it was finished, I mean. Of course, you’ve walked out of a movie. I mean… you’re not still there, right? But have you ever been so bored or disgusted by the proceedings you just said fukkit and extracted yourself?

I can’t really remember leaving a movie before it was over. There were certainly a few I should’ve thrown the towel in on. When I lived in Atlanta I saw quite a few art films, and some of them were interesting, a few were great, and a handful were just pure garbage. To me anyway. I always feel like it’s probably genius, and I’m too bumpkin and unsophisticated to understand it.

But I can remember one in particular that featured a long scene of a plump woman dressed as a little girl, up a tree and dropping flower petals to the ground. For no known reason… and for a very long time. I was just sitting there blinking in confusion and aggravation. It was in the same building the Sex Pistols played their first U.S. show, and I wondered what Johnny Rotten would think of this pretentious dogshit. So, at least I had that to cling to: channeling Johnny’s obliteration of the spectacle. We didn’t walk out, though. We endured it to the end.

Twice I can remember going to a concert to see the opening act, and taking off before the headliner took the stage. The first was Joe Walsh opening for Stevie Nicks in Charleston. I watched Joe rock the house for 45 minutes or whatever, and hit the highway before Stevie’s sheep bleating could commence. She’s very mysterious, you know. She spins round and round with scarves.

And in Atlanta I watched Squeeze open for Sting, and hit the exit before Mr. Precious could enter the picture. I’m sure he did an impassioned version of “Message In A Bottle” accompanied by a lone zither, or somesuch. But I wasn’t there to witness it. I’d extracted myself.

But those two were by design. I’d planned to leave after the opener in both instances. However, I remember leaving a ZZ Top show in Charleston, ’cause the girl I was with hated it. This was before they’d become MTV cartoon characters, and it was a lot of extended guitar jams, etc. She wasn’t digging it, and we left. Oh well. Also, I kinda-sorta remember leaving a Moody Blues concert because it was just so bloody dull. Now they’re in the Rock n Roll Hall of Fame. Go figure.

And that’s all I have. I can’t come up with anything else.

Steve and his wife went to see Brokeback Mountain years ago, down in Central PA, and he said some guy stood up about 30 minutes in and shouted, “What the fuck?! I’m not watching this shit!!” and stormed out. Ha! Wonder what he thought he was going to see?

If you have anything on this, please tell us about it. Use the comments section so thoughtfully provided by our WordPress overlords. And I’m going to call it a day here, my friends. Yesterday felt like Friday to me, and now I get to relive it: a bonus Friday for Jeff. Good stuff.

I served up a freshly baked podcast episode during yesterday’s Friday for patrons. Check it out here. And this is the summary:

In this one I talk about the beautiful day we’re experiencing and what that does to me, my regular encounters with the assumed employee of the month at a local beer store, some kind of strange otherworldly baseball game I heard on the radio which I’ll probably never forget, and my friend Tim’s fantastic analysis of the first season of Cannon. I hope you enjoy it. Thanks for the support!

It felt scattered and all over the place during the recording, but I relistened to the finished episode and was shocked to realize it’s not horrible. Who could’ve predicted such a thing? But when you talk about Frank Cannon for an extended period, it can’t help but be kinda good. Right? Right.

I hope you guys have a fantastic weekend.