Many years ago, when we were still in Atlanta, Toney and I drove WAY out to the suburbs one Saturday afternoon to attend an open house at a new subdivision that was being built. I don’t know what brought this on, because we had never even entertained the notion of buying a house, or (gasp!) moving outside the Perimeter.

We weren’t married at the time, but I believe a date had been set. We were living in an apartment in the Little Five Points area of the city, which was noisy and bohemian and questionable at best. But, I don’t think we’d discussed moving. So, the whole thing feels somewhat bizarre to me now. Perhaps Toney had thoughts going on inside her head that I didn’t know about?

In any case, we drove out there, and it seemed to take forever. I wasn’t even sure we were still in Georgia, and thought it might be a good idea to stop and have our tires rotated before heading back.

And you can probably guess what happened… We got hooked up with a nice saleslady who was pushing hard for us to buy a place inside the new development. She drove us around on a golf cart and showed us the pool and the clubhouse and the tennis courts. It was very impressive, a beautiful place, and it didn’t take long before we were having insane thoughts.

It was a million miles (give or take) from where we both worked, and made absolutely no sense. However, the woman could smell blood in the water. She wanted us to consider having a house built there, but the price of such a thing was out of the question. Plus, it didn’t seem possible. Me? Having a house built?? Ha! That’s for adult people, folks who have their shit together and know how to have conversations and wear grown-up clothes and whatnot. It certainly wasn’t for me.

“No problem,” our new friend shouted, “I’ll just show you some re-sales!”

And that touched off a series of events that led us to the saleslady’s kitchen, eating lasagna, and making an offer on one of the houses. It was craziness! What the hell were we doing?! It felt like I didn’t have any control over my actions. I was having an out-of-body experience, watching us sign papers and shaking my head in disbelief. I think that woman was some kind of hypnotist, or maybe she put something in the pasta she served us? We both walked out of there, muttering, “WHAT? THE? FUCK?”

Here’s the house that sucked us in, as it appears today at Google Maps: 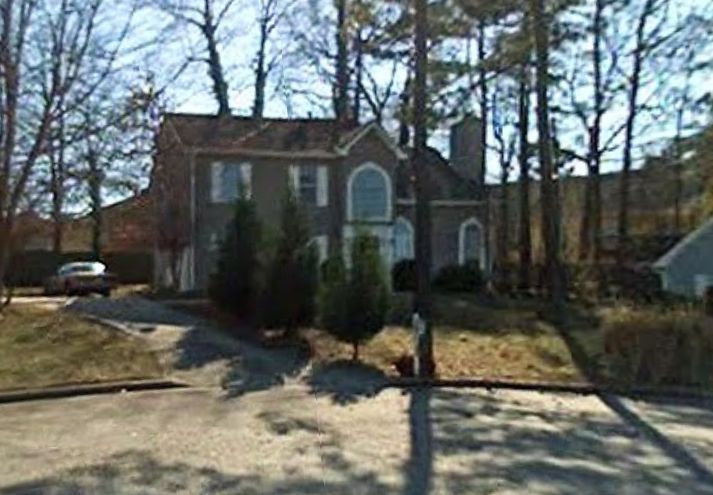 Oh, we loved that place. It was two years old, aka better than new, and just a fantastic home. However… we couldn’t get financing without a down payment. You know, on account of the fact that neither of us were making any money to speak of.

So, I sold some of my baseball cards. It was something I said I’d never do, and the whole thing still gives me a case of the loose stools. I didn’t sell them all, but liquidated many of the prized jewels in my sports collector’s crown.

And while it was going on, I was a basket case, pacing around and running my hands through my hair. I bought an ad in the newspaper, saying I had baseball cards to sell, and there was an avalanche of response. I was meeting people inside restaurants and cutting deals, each of which ripped another hunk of my heart out of my chest. It was awful.

I remember sitting in a booth at Shoney’s, across from a husband/wife wheeler-dealer team. They were professionals, and had all sorts of notebooks and calculators with them. They were trying to lowball me on some stuff, and I became furious. I didn’t even want to do this, and certainly wasn’t going to get bent over a couch on top of it all. I told them the deal was off, stood up wearing a mask of fury, and left the place before I started throwing haymakers. Interestingly enough, they followed me to the parking lot and ended up paying a decent price for some things.

I raised $10,000, and stopped. It was enough to get us into the house, and we lived there for four years. Toney still says it’s the best place we ever had. I don’t know about that, but it was certainly nice. And when we sold it we made a decent profit, which we rolled into the house in California, and eventually into our current place.

So, the sale of my beloved baseball cards has paid enormous dividends through the years. I can’t say it was a mistake, by any stretch of the imagination. But man… it still bugs me. Ya know? I don’t even want to tell you what I sold, because it makes me too sad. Aaaargh!!

What about you? Have you sold something you still regret on some level? Or maybe it’s something you gave away, or lost somehow? If so, please tell us about it in the comments.

And thank you guys for reading!