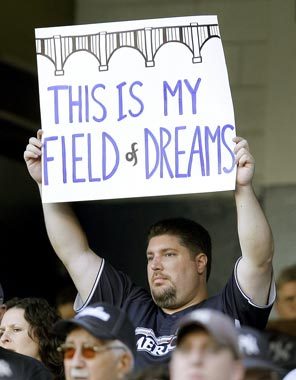 While I was driving home from work on Sunday night (actually Monday morning), I went past a mysterious house not too far from ours.  It’s an old farm house that’s probably been standing for 150 years, and many nights it’s lighted from top to bottom.  It’s incredibly bright, like they have a Hollywood spotlight running wide-open in every room.

I’ve asked Toney about this place, but she doesn’t know anything about it, either.  At one point I was convinced it was an old folks’ home, or an assisted living residence for Alzheimer’s patients, but that was before I started seeing the lights on in every room at 2:30 am.  That development rendered my theories null and void.

And on Sunday I did a full double-take as I went past, because there were five or six people outside doing yard work.  In the middle of the night!  It looked like they were raking and laying in mulch, and doing all manner of intense landscaping.

I mean, what the hell?  It’s baffling to me.  After I gave up on the Alzheimer’s idea, I thought somebody might be cooking crystal meth in there.  But the place is really well-maintained, and now I see all this nocturnal gardening?  It just doesn’t make any sense.

Any ideas?  I seriously don’t know, and welcome your thoughts.  One of these days I’m just going to stop and ask.  There are always people around.  It’s weird, man.

Yesterday I decided to rent a new post office box, since the ten year run with good ol’ Box 4 in Olyphant came to an abrupt and ugly end.  I couldn’t decide which town to choose, and almost went with Chinchilla.  But Toney said that sounds “stupid,” so I opted for Clarks Summit.

I went there armed with my properly completed application, two forms of ID (driver’s license and passport), and my debit card in my left front pocket.  And the guy at the counter said, “Whoa!  It’s somebody who’s prepared!  Somebody who actually read the instructions!!  Do you know how rare this is?!”

Yes, as a matter of fact, I do.  I’m painfully aware that I am a member of a dying breed.  Every time I go to Target or the grocery store or Sam’s or Best Buy… I’m reminded.  And my colon just did the wave, while I was thinking about it.

And now I’m back in business.  I can start collecting pizza coupons and Wal-Mart circulars, just like the good ol’ days.  …I’m sorry, I’m getting a little emotional here.

Of course I’ve still got some renovations to do, and some light decorating.  I’m thinking about lining Box 88 in granite, and maybe adding some recess lighting in the roof.  What do you think?

How else could I improve my new mailbox?  Help me out, won’t you?  Use the comments link below.

And finally, I have a Question suggested by Metten.  He wants me to ask if any of you have ever made a sign, and displayed it at a sporting event. He sent this suggestion from last night’s Kansas City Royals game, and was apparently surrounded by signs at the time.  I just don’t know.

We can expand the question to include any kind of event:  sports, concerts, parades, political rallies, demonstrations, or anything of the sort.  Have you ever made and held a sign over your head?  Or draped it off the upper deck, or whatever?  I haven’t.  I’m not really a sign kind of guy.  But what about you?

And since we’re on the subject, there was a couple outside the post office yesterday with all sorts of anti-Obama signage.  One said “Obama Needs Therapy!” (wtf?) and another featured a doctored photo of the president with a Hitler mustache.

I don’t much care for political kooks, on either end of the spectrum.  And when these two tried to start a conversation with me, I gave them a dismissive wave of the hand and kept walking.  Like I’m going to stop and talk to crazy people…

During the Bush years I treated the lefty versions of these two in exactly the same way.  A kook is a kook in my book.  They’re so far to the left and the right, they’re wrapping around and meeting in the middle, or something.  Sheesh.

Anyway, back to the question…  Have you ever made and displayed a sign at some kind of crowded public event?  Maybe “We love you Woody!” at a Bay City Rollers show, or something?  Tell us about it, won’t you?