We made it to West Virginia and back. There were no complications, but it was still fairly excruciating. It’s just such a loooong drive. By the time you reach hour seven or eight, it feels like you’re about to lose your goddamn mind. It’s psychological, of course. You know you’ve entered the final 10% of the trip, and just want it to be over. If the drive was 15 hours, the ‘lose your mind’ part wouldn’t happen until around hour 13 or 14, or so. It’s all fully customizable. The same thing happens when you’re working out a two-week notice at a job. The final week, especially, feels like it’s never going to end.

In any case, I’ll give you a full report on the trip next time. If I can get it together. Today I’m running late, on account of the chaos. So, I’m just going to briefly tell you about something that happened to us during the drive back, and turn it over to you guys. Good? Good.

I’m not sure what town we were in, but it was definitely during the Maryland segment of the trip back. We stopped at a Chick-fil-A restaurant for lunch. And before we get into it, I want to confess that I made a tactical error there. I ordered a “value meal” that did not include cole slaw. I love their cole slaw, and realized it way too late in the game to make an adjustment. So, I was already upset. With myself, mostly. I’m generally very reliable in a fast food setting. In fact, I like to think I have a black belt in fast food, so I was extremely unhappy with my performance. Ashamed, really.

We went to our table with our pitiful partial-meals, and I had to take a quick trip to the urination station before digging in. And as I was returning, I spotted a guy sitting near us with a black dot on the tip of his nose. It looked like a small piece of black paper, glued or taped to the very end of his nose. I mentioned it to my son, he checked it out, and we both chuckled at the inexplicable nature of it all. The boy said it looked like he took a Sharpie and painted the tip of his nose, but I’m fairly certain it was paper. 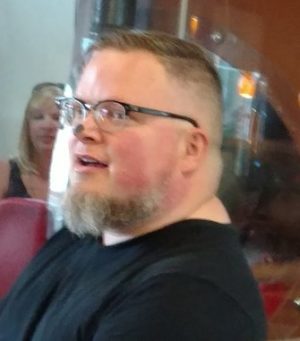 Then things took a dark turn… I was attempting to get a photo of the guy. You know, ’cause I’m a Surf Reporter and need to be able to properly illustrate things for you folks. And he caught me. In fact, he turned all the way around, with the dot pointed straight at me, and said, “Stop taking pictures of me.” He was pissed.

Here he is. My son and I said nothing, and continued eating our chicken sandwiches and waffle fries. Thankfully the guy didn’t pursue it beyond that, and we exited without further incident. And the boy was a little irritated with me. “You’re going to get us killed one of these days,” he said. “You’re always doing something.” Hey man, the guy walked into a place of business with a black dot on the tip of his nose. It’s game-on at that point. Am I wrong?

Have you ever gotten into trouble with your phone? By trying to take a photo on the sly? Or texting the wrong person? Or texting while driving, or walking? Or maybe the hands-free voice blurted out something embarrassing? Anything at all, phone-related? If so, please share your stories in the comments.

And if you have an idea what the hell was going on with Dot Boy, please enlighten me on that, as well. Hopefully it doesn’t have anything to do with the treatment of some horrible disease? I’d feel… well not bad, of course. But a little less enthusiastic about the mockery.

I need to go now. This day is already off the rails.