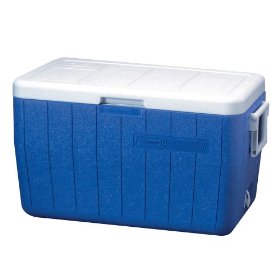 When I was a teenager, before I had access to real privacy, my girlfriend and I would sometimes, you know, romance each other inside a car.

This was a far from ideal situation, because I’m six feet tall and owned a Chevy Nova.  A few times I got so carried away I almost knocked the steering wheel into the backseat, or donkey-kicked a window out of its housing.

But it was better than nothing, especially at the age of eighteen…  Hell, at that point in my “career” I would’ve tried to do it inside a Coleman cooler.

And since we were driven to such drastic measures, there were a few… complications.

One time we were parked way out in the country, somewhere near Camp Virgil Tate, and three hillbillies walked up to the car.  I sometimes get irritated when West Virginians are portrayed as shit-kicking hayseeds, but that’s exactly what these guys were.  It was like something off HBO.

They were wearing overalls and possibly straw hats, and I didn’t see any banjos, but there’s always a little flat-pickin’ going on when I remember the ordeal.  All three had pissed-off expressions on their scruffy faces, and two were carrying shotguns.  Shotguns!  The floor of my ass nearly fell out.

Thankfully, my girlfriend and I weren’t to the main event yet, but things were certainly moving in that direction.  If those three had walked-up on such a scene, who knows what might’ve happened?  I have a feeling they would’ve wanted to join in.

Anyway, they told us we were trespassing near their gas wells.  Wha’?  I apologized, and told them we had no idea there were gas wells around there — which was the honest truth.  We’d just move along, I suggested hopefully.

And you know how there’s usually a point where the tension is released?  When it becomes obvious there was nothing malicious intended, and everyone exhales and relaxes a bit?  Well, that never happened in this situation.  Those guys just continued staring at us, with their beady ferret eyes, and it felt like violence was a distinct possibility.

I backed my car out of the little area where we had parked, and got the hell out of there.  When it felt like we were beyond the reach of a shotgun blast, we both started howling in protest:  “Hoooooo-ly shit!….”

Then I floated the idea of parking somewhere else, and she looked at me like I must surely be out of my mind.  Hey, I had an obligation to at least put it out there.

Another time we were alongside a different country road, with the windows rolled down on a hot summer night.  As I type this I realize it was a slasher film waiting to happen, but I wasn’t thinking those kinds of thoughts at the time.

As things progressed, my girlfriend suddenly let loose with a piercing scream.  Damn, I thought, I must be getting better!  But it wasn’t me, of course, it was the horse head inside my Nova.

The thing had apparently wandered over to us from an adjacent field, and was checking things out.  Its head was almost entirely inside our car, and it was doing all sorts of weird things with its lips.

“WHAT THE HELL?!” I hollered, and nearly exploded my skull trying to get away from it.  The sudden movement startled the interloper, and he retracted himself from our business, before ambling away without a care in the world.  Sweet sainted mother of John F. Kerry!

The last story is the worst; I still get a full-body shiver when I think about it.

The two of us were parked on a dirt road in Dunbar, up behind a medical office.  The road, as far I knew, was never used.  It was overgrown by brush, and led to a radio tower or something.  I’m still unclear on it.

Anyway, we had a (false) sense of security up there, and would sometimes take advantage of it.  My friends and I occasionally drank beer on that little road, and during winter, when the leaves were off the trees, we could see most of the town from the high perch.

But on this evening it was only the two of us, me and my girlfriend, and we eventually ended up in the backseat.  Everything was going as I’d hoped, when someone turned on a flashlight outside the car.  And shined it through the window on us!

What in the pearl-handled shit?!

We were fully-engaged, if you know what I mean — “running up that hill,” as Kate Bush might put it.  For a few seconds I didn’t know what was going on, it all seemed completely impossible.  Whoever this person was (the Dunbar Mangler??), he was undoubtedly being treated to an interesting view.

We attempted to cover-up as best we could, and the person tapped on the window.  Gulp.  I tried to focus my eyes on the guy, and realized it was cops.  In the plural sense!

My heart was hammering in my chest, and my girlfriend’s face was now devoid of color.  It was simply too much to process.

I opened the door a little, and my underwear fell onto one of the cops’ shoes.  He started asking a bunch of questions, while passing me my Fruit of the Looms, and finally wanted to see my driver’s license.  “OK, but you’ll have to help me find my pants,” I said.

There was much snickering amongst the non-speaking cops, but the main one was all business.  While checking my ID he said, “Jeff Kay?  Hey, are you John Kay’s boy?”

Uh oh.  Those were never the words I wanted to hear.  My Dad was the fire chief in our little town, and this horrible story (ALL horrible stories) would be funneled to him within minutes.  He knew every one of those cops, they were all co-workers.  Oh man.

This new information really caused the snickerers to ramp up their snickering, and now the main guy was also joining in.

They let us go, but warned us to never park there again.  The medical center had recently been broken-into, they told us, and was being watched.  Simply fantastic.

Before they left, now barely able to contain full-on laughter, the main guy said, “Don’t worry, we won’t tell your Dad about this.”  And I didn’t believe him, not one tiny bit.

Completely mortified, my girlfriend and I returned to her house.  I don’t think either of us said a word while we drove, and sat like an oil painting on her couch.  Finally, we looked at each other and started laughing.  And couldn’t stop, for a good long time.

Sweet Maria!  My Dad never said a word, but it would be incredibly naive to believe he didn’t hear about it.  I mean, seriously.

And those are my three stories on the subject.  Now it’s your turn.  Have you ever been caught, um, doing it?  Or, if you prefer, have you ever walked in others?  Tell us about it in the comments — without getting overly graphic, if you don’t mind.