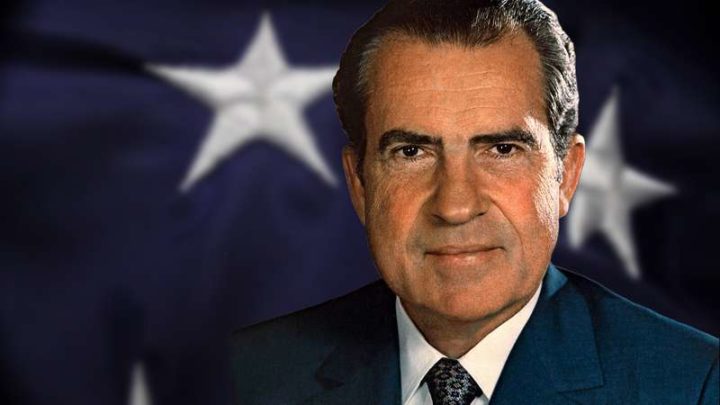 Hey everyone, this is K. Thomas Zipperer, or Producer Zipp, as Jeff so lovingly calls me, and the big dog himself has given me a shot at the Surf Report, so I’m gonna try a little harder than I normally do at stuff to impress you.

Anywho, it’s Halloween, one of the best, if not the best holidays of the year. And even though Halloween 2020 was supposed to be as dope as something called ‘Halloween 2020’ could be, with it taking place on the one Saturday of the year that the bars will be open an extra hour. So yeah, if this God damn virus wasn’t happening, we could have had a real bad ass spooky season.

But instead, we’re stuck ‘trunk r treating’, or even worse, doing non spooky things with our loved ones at home. The horror.

And to top this all off, Halloween is taking place on not only a full moon, but a BLUE moon! Which, by the way, is two full moons in the same month and has nothing to do with the color of the moon. And I mean, come on, when have you ever looked up at the sky and seen a literal blue fucking moon? You don’t think you’d have noticed that by now? I digress.

So, to honor what little shred of spooky holiday spirit we’re gonna have this year, and in observation of the full moon Halloween that could have been, I wrote a full podcast episode about….the Moon! Some of you might be thinking to yourself,”That sounds stupid. It’s just a big dumb rock in the sky. How scary could it be??”

Well, yeah, I guess if you phrase it like that, it does sound kinda stupid. But too bad, cause I already wrote and released it here. If you’re wondering, we cover myths and legends associated with the moon, modern horrors and misconceptions associated with moonlight, and the Apollo space program. Plus, there’s an awesome horror sketch that takes place at the beginning of the episode that gives you a chance to hear me die, which I imagine is the fantasy of some of ya’ll when I guest host for Jeff on the podcast.

While researching, I came across a ton of shit, as it seems like every culture, society, or religion has some tale or another involving the Moon. I think this plethora of content can be easily explained by the fact that everyone can see the Goddamn Moon.

But, the most genuinely chilling and disturbing thing I came across didn’t involve aliens, or mythical beasts, or any of that other sci-fi nonsense.  No, it involves a villain who’s infamy will reign through the halls of time.

Even though Nixon himself wasn’t personally on the Eagle when it landed (which is actually the plot for a sci-fi/historical fiction novel I’m working on), as the commander-in-chief it was his responsibility to lead the United States along on the journey to the Moon. This entailed some of the basics like announcing that, indeed, the eagle had landed.

However, like with pretty much anything leadership involved, you’re gonna have to eat some shit every so often.

And in this case, the shit Nixon almost ate was a heaping spoonful of dead ass astronauts if anything happened to Neil Armstrong and Buzz Aldrin. As is customary for large, ambitious endeavors, those responsible prepared two speeches. One for if they’re successful, and one for if they fail.

Two famous presidential examples include General Dwight D Eisenhower on D-Day and Harry S Truman if the A-bomb turned out to be a really expensive dud. 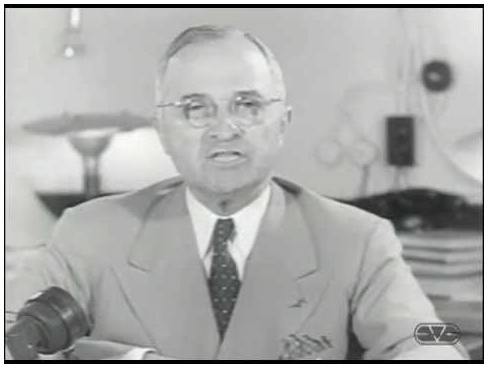 It was gonna be fuckin’ sick, I swear.

Nixon was no exception. Below is the content of the speech that was to be given in case the Eagle didn’t land. Or landed too hard. Or if carnivorous moon worms turned out to be a real thing. 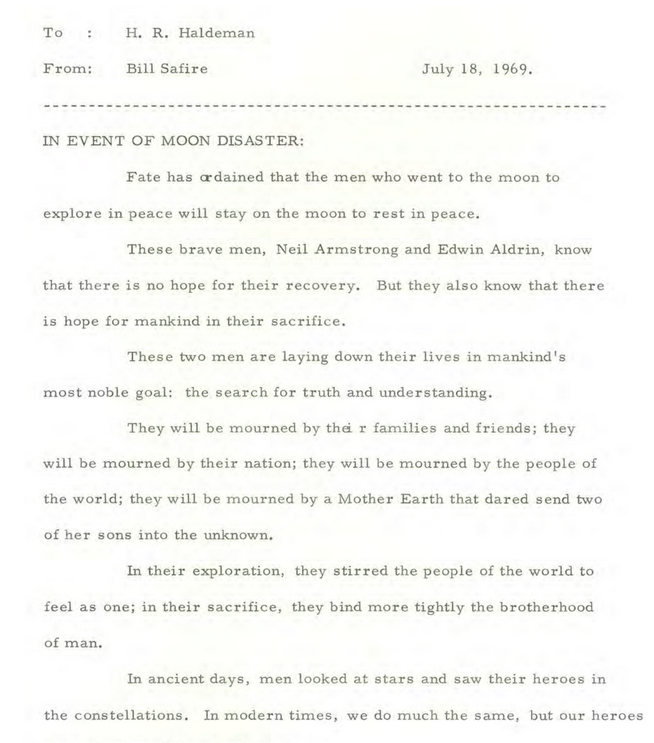 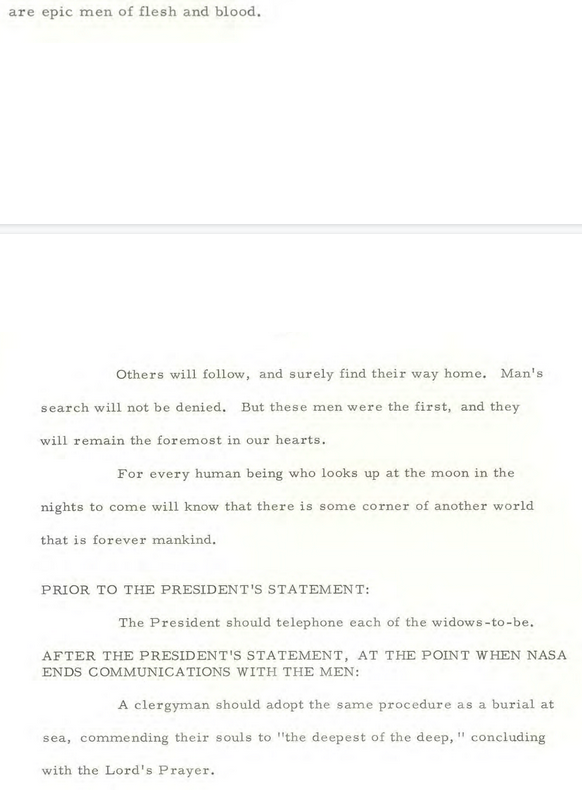 As you can see, the speech does a great job beautifully eulogizing two very brave men on the cutting edge of human exploration. It would have been a heavy moment, no doubt, but it would have been handled in a way that balanced the appreciation of their sacrifice with the poetry and symbolism inherent with such a monumental event. Thankfully, Nixon’s original ending line was “sock it to me”, but he was convinced to drop it at the request of the producers of ‘Laugh-In’.

I won’t lie, I find the speech chilling to read, mostly because it makes me realize how close we came to confronting the evitable daunting reality of losing a human body in space. I’ll touch more on that in a bit, but first I have to point out how fucking creepy the phrase “widow-to-be” is. And it was 1969, so they probably would have called Mrs. Armstrong and Mrs. Aldrin that to their face.

But what this means is NASA prepared for the possibility of Buzz and Neil just being stuck there, slowly running out of oxygen while Michael Collins orbited above, grateful he picked the short straw and stayed in the command module.

For those wondering, with the exception of three cosmonauts during the Space Race days, no humans have actually died in space. They all die either coming up, or going back down. Which is totally understandable, as it seems fairly dangerous.

Now, the concept of a human body being lost to space disturbs me because it’s just so permanent. You’re just gonna float and float and float forever until you hit a star or a moon worm eats you. And if you really want to make your head hurt, just imagine the actual possibility that the first human to accidentally be tossed into space could float for millions of years and be found by a future and/or alien civilization. If I’m starting to sound like your brother’s high friend, yes, I am high while writing this.

But the Moon as a possible permanent resting place offers a unique issue for the rest of us humans who survive here on Earth. We all have to collectively be sad every time we look up at the night sky. I also imagine full moons would be a bummer for the ‘widows-to-be’ for quite a while. 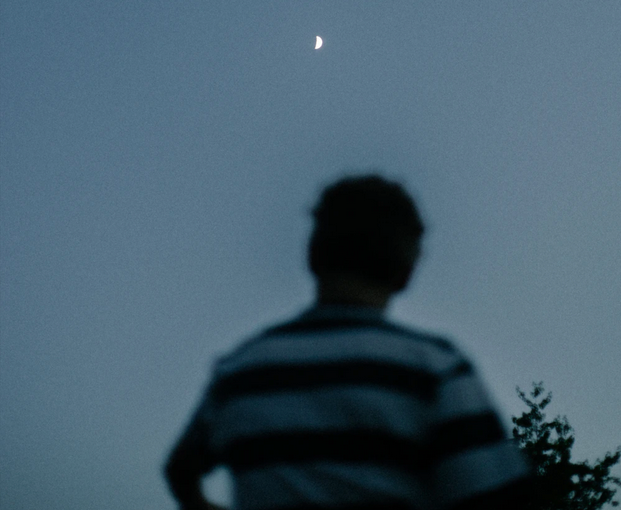 “Everytime I look at the Moon, all I see is him”

As you can see at the end of Nixon’s unused speech, the intention was to treat this nightmare Twilight Zone premise as a burial at sea, except the ones being ‘buried’ weren’t dead, but for all intents and purposes were to be considered deceased once radio transmissions cut off. Just imagine the horror of that situation. Stuck in a little Jiffy Pop popping pan, 240,000 miles away from the nearest human or unfiltered cigarette! I wonder what Neil and Buzz would have done in the meantime. Played cards? Turned off their oxygen early, just to get it over with? My vote would have gone to drinking all the tang and opening the hatch. Let the laws of physics have a go at my dead carcass and give those moon worms something to talk about when they find my fat, bloated corpse covered in moon dust.

But, alas, those brave men, who some would say had the ‘right’ ‘stuff’, didn’t perish. They landed successfully, Moon walked, and floated their happy asses back to Earth to take a well deserved splash in the ocean. They followed this up with a short, fun filled stay in quarantine, which I’m sure was exactly what they wanted to do after spending a week cooped up together in space. 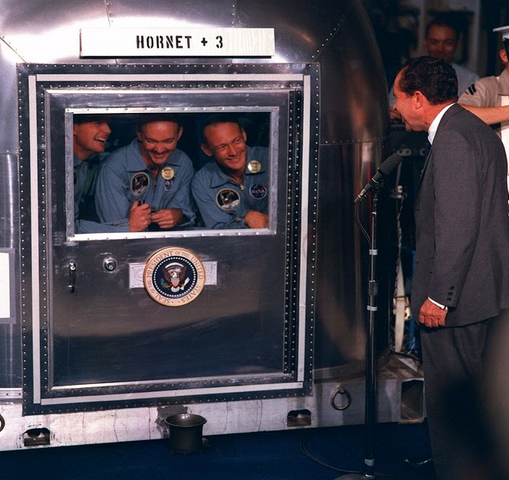 And finally, once the entire ordeal was finally over, the trio returned to their possible ‘widows-to-be’ and had what I assume was the best sex of their lives. Except Michael Collins. He had to hover outside Buzz’s and Neil’s rooms while they made love. Bummer.

Thomas Zipperer is a writer, podcaster, editor, and voice performer. He hosts the weekly comedy show No Redeeming Qualities, and produces the political podcast 1 Big Toilet. He can be contacted at K.Thomas.Zipperer@gmail.com