Today’s guest post comes to us courtesy of Becca, who blogs at StickyJamHands.com  I think you’ll enjoy this one, and if you do… please check out her website for more.  Have yourselves a great day, my friends! See ya soon.  -Jeff 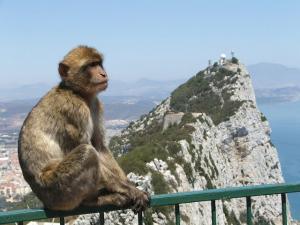 In the spirit of Christmas I thought it would be most fitting to regale you all with one of my most asked about experiences involving… angry monkeys. What says Christmas better than angry monkeys? So little comes to mind.

Let me preface this by telling you that I have not done a lot of international travel. I have lived on both coasts and seen much of the United States but I have only been “overseas” twice – so this entire post may paint me both worldlier and more pretentious than I am. But I don’t really care what you think.**

Several years ago before we made it official and bought a house and produced offspring my then boyfriend and I scored a trip to Spain to spend 10 glorious days drunk on sangria and bloated from too much olive oil. It was June and beautiful and up until the end the trip had been a rousing success. ( I feel like the best way to see if you are compatible with another human being is to go somewhere neither of you can communicate and see if you don’t end up killing each other out of pure frustration stemming from your combined incompetence.) It’s fortunate we are both big drinkers and Spain with its 26% unemployment rate seems to be perfect made for people slovenly drunk all day. Mas cervezas por favor.

It was our last day there and after renting a car and traversing almost the entire country ourselves we decided to channel our inner senior citizen and signed up for a bus tour that would take us to Gibraltar for the day.

We were excited to spend a day not having to navigate the illogical European round-about. We looked forward to a full English breakfast. Since Gibraltar is an English colony there was no shortage of English pubs and taverns complete with blood pudding and bangers and mash – we had a plan to eat, drink and shop our way through their duty-free marketplaces.

We arrived early in the morning and did, in fact, stuff ourselves with eggs and baked beans and brown bread all washed down with several healthy bloody marys. We decided next to make our way up to the top of the rock – you can’t say you’ve been somewhere with a giant rock if you don’t at least attempt to take picture from the top of it. We handed over a couple Euros to ride a cable car up and as soon as we arrived at the top we were greeted by the monkeys that live there.

Side note: they aren’t really monkeys at all but rock apes (monkeys without tails are called apes). Apparently there is a legend that says that Britain will hold the rock as long as there are apes living on the top of it – to this end the British are constantly importing African monkey-apes to keep the rock stocked. These animals are malevolent and completely  pissed off about being dragged from their homes to ensure British rule ( these alleged ‘facts’ where told to us by our tour guide leader and have in no way been researched  or verified – the part about them being pissed off is my own conjecture from events that are about to unfold).

It was a warm spring day and I (as any good traveler should be) was dressed in layers. I had my suede jacket draped over my arm as we emerged from the cable car and almost immediately one of these angry monkey-apes charged at me and grabbed my jacket. Unwilling to lose my coat to a simian I pulled it back from his clutches, clearly only enraging him further because he then took it upon himself to climb up on me long enough to perch on my left shoulder and sink his teeth deeply into my elbow.

We had been on the rock of Gibraltar for exactly 37 seconds.  The monkey having done what it set out to do, launched itself from my head ripping out a handful of hair as I yelled a certain expletive that made every child there that day start to cry.

Bleeding and unsure of the protocol in these situations I searched for the highest authority figure I could find – this ended up being the cashier in the gift shop (of course). I told her what happened and her surprisingly irate response was “what did you do to the monkey?”… Um.  I hysterically calmly explained to her that I didn’t believe the monkey was the victim. She offered me a band aid and told me that’s all she could do.

I oscillated between wanting to continue with our plan of shopping and drinking or maybe seeing about getting a tetanus shot (I was suddenly in the mood for an ice cold Guinness). I didn’t want to be the ugly American who made a big deal about everything – maybe these monkeys bit people all the time.

In the end, my soon to be husband convinced me that we should seek out medical assistance. We made our way to the local hospital which resembled more of a day spa. A short ten minute wait and I met with an administrator who was visibly upset at having to charge me for their services (12 euros – 12 euros for an emergency room visit!) I considered asking them what other procedures I could get done while I was there – a 24 euro boob job or something… but unfortunately we were on a tight deadline. So I paid my money and got a tetanus shot and a lot of gauze and after hugs from all the hospital staff I had just enough time to chug down two ice cold Guinness drafts before meeting back up with our senior citizen entourage.

I left Spain the next day with no duty free good but enough antiseptic wipe to last a lifetime. I still have a scar on my elbow.

*editor’s note: I’m going to use the word Christmas several  times throughout this post – it’s not politically correct and if you have a problem with this – I’m not really sure why you are here in the first place.  This is the West Virginia Surf report. Please check your spelling of Virgin – you’ve probably clicked a wrong link.

**That’s kind of a lie – I secretly want you all to really, really like me.