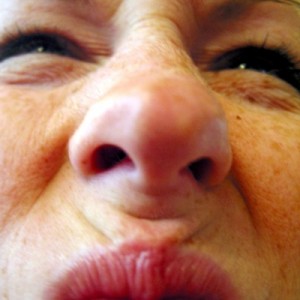 About two weeks ago Toney bought a weird pizza from a weird pizza shop.  It’s not even a real shop, in fact.  As I understand it, it’s actually a high-falutin’ catering service that sells “gourmet” pies to the general public three or four evenings per month.

So she bought something called a shrimp scampi pizza (for roughly a million dollars), and it was just about the stankiest thing I’ve ever encountered.  She and the Secrets went to town on that thing, but I couldn’t even be in the same room with it.

Blecch.  It smelled like a panhandler who used to hang around the parking lot of Tortilla’s in Atlanta:  “Give me a dollar and I’ll take my bustling, living crotch and pits all the way over there…”

They gobbled-down most of Satan’s pizza pie, then stuck the remaining third of it in the fridge.  And every time I opened the door on that thing, I was slugged in the gut by the funk again.  My jaw fully-retracted three or four times per day for upwards of a week, which is, I believe, a new non-flu record.

Thankfully the pizza is long-gone by now, but I swear I can still smell it.  Not full-strength, but just a hint, way off in the background.  Ya know?  Toney tells me I’m crazy, but I know what I know.

When we moved to Pennsylvania we must’ve looked at a hundred different houses for sale, and one of them was really nice, but smelled like the owners were boiling a groundhog, or something.

The stank in that place was strange and gamy, and clung to my nose hairs for a week.  And even though we liked the house, it was immediately off our list.  The smell poisoned everything for us.  Even today, almost ten years later, one of us always says, “Remember how that house smelled?” whenever we drive past it.

One of my grandmothers used to live in a house that always smelled musty and old, sorta like gardening mulch.  It was something to do with the house, because when she moved the stink didn’t go with her.  Probably some kind of ancient moisture problem…

And when I was a kid there was a Cuban family in our neighborhood whose house always smelled like food, but not the kind of food I was accustomed to.  Everybody else’s place smelled like pork chops, fried potatoes, and pinto beans.  But at the Cuban house it was something wildly exotic, at least for 1972 West Virginia.  Yeah, who the hell knows?

Do you know anyone who lives in a house or apartment with a distinctive smell?  It doesn’t necessarily have to be a stink (although those are the best stories), just any kind of odor you associate with the place…

Use the comments section to tell us about it, won’t you?

And I’ll be back tomorrow, with a full-length Topic Dump to close out the category.