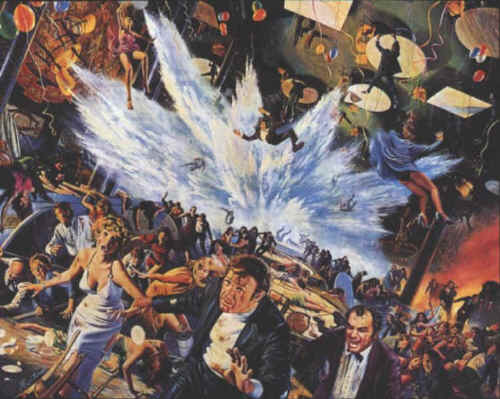 A guy at work asked what I had planned for New Years Eve.  And I told him it would probably be the standard:  Everyone would be asleep by ten, except me.  And I’d be drinking beers in front of the TV or computer until around 12:30.  I’d probably watch the ball drop (heh), then call it a night.

“Wow, that sounds great!” he said, with high sarcasm.

But that’s the way we roll at the Compound.  I’ve never gone out on New Years Eve, even when I was young and childless.  Not once, in my whole life.

Yeah, I’ve seen the party scenes at the beginning of The Poseidon Adventure (before everything went to hell, and Shelley Winters was forced to swim through the ocean with a rope between her teeth), and it just doesn’t look like something I’d enjoy.

It appears that novelty hats would be involved (correct?), along with loads of strangers invading my personal space and blowing through cheap Chinese-made noise-amplifiers.  I mean, seriously.  Who needs it?

And yes, that’s my New Years Eve frame of reference:  the opening scenes of The Poseidon Adventure.  What of it?

What about you?  Do you go out on New Years Eve?  I’m made to feel that the entire world is partying, like something off MTV Spring Break, and I’m the lone stick in the mud, power-farting into upholstery at home with a bottle in his hand.

But am I the only one?  Tell me what you have planned this year.  And if you have any memorable New Years Eve stories to tell, from back in the glory days or whatever, I’d like to hear those too.  Use the comments link below.

And speaking of being cool and cutting-edge, we got a new hot water tank installed yesterday.  How great is that?  Yeah, just when I start sounding like a burned-out old fogey, I hit you with something vibrant and exciting.  Dammit, I refuse to be pigeonholed.

And nobody can touch the quality of our hot water.  Nobody!

I still don’t feel so great.  Thanks for asking.  Plus, I’ve now got flaking skin around my nostrils, to add to my disturbing Statler Bros. voice and gloopy eyes.  I look like some kind of escapee from a government quarantine.

But, if I can make it to 1:30 am, I’ll be in the clear.  After tonight’s ball-mashing session, I’ll have four recuperation days ahead of me.  And I plan to make good use of the Netflix “Watch Instantly” feature.  From a horizontal position, if possible.

Please remember that the price of the blue/gray shirts will go back to sixteen bucks on Friday.  So, if you want one at the insane no-profit-for-me price, you’d better jump on that shit right now.  Here’s yer link.  I plan to make a post office run tomorrow, so today would probably be a good day to order.

And I want to publicly thank Pagan for buying me one square-foot of Scotland, as a Christmas present.  I have my deed (it’s actually a lifetime lease), and you can read about the area where my square is located, right here.

Thanks, man!  That’s incredibly cool, and I plan to visit my land someday soon.  I want to make sure it’s being maintained to the highest Half-Shirt standards.  I can’t have my square going to seed; I’ve already started lying awake at night, worrying about it.

When I go, I’m going to see if I can set up a webcam.  Maybe I’ll be able to stream constant footage of my square-foot, here at TheWVSR?  That would be fantastic.

I’m calling it a day now.  I need to do something about all the dead skin around my blowholes.  Good god…  I think I asked a Question up above, something about New Years Eve?  I can’t remember.  But let’s just go with it.