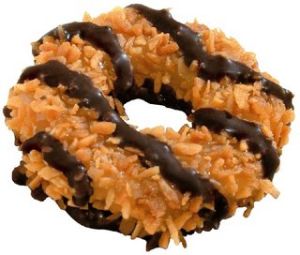 A few weeks ago, in a moment of weakness, I pre-ordered three boxes of Girl Scout cookies from a woman at work. And last night word spread throughout the place: the eagle has landed.

So, I handed over my $10.50 (shit!), and got two boxes of Thin Mints, and one Samoas. Then I promptly went to my desk and polished off one entire sleeve of minty goodness. A whole column… and I had to force myself not to crack open the other one inside the box.

But I wanted to save some for Toney and the kids, and set them aside. But I caught myself looking at the things, stacked on a little shelf to the right of my computer, out of the corner of my eye — for the rest of the evening.

When there are two and a half boxes of cookies within arm’s reach, it’s difficult to focus on the task at hand… I think Lincoln said that.

What are your favorite kinds of Girl Scout cookies? One of my co-workers said he bought a box of Savannahs, and I shouted, “What the hell is that??” It aggravated me, because there’s an established lineup which shouldn’t be tampered with. Savannahs, or whatever they’re called, are like an expansion team in baseball. They’re dead to me, for at least twenty years.

And you know what else is really good, although I almost never buy it? Boy Scout popcorn. When I was in Atlanta there was a guy at work who practically forced everyone, at the point of a gun, to purchase at least one box of the stuff. I lived on beer and burritos in those days, and it broke my heart to hand over ten bucks — or whatever — for freaking popcorn. But I had no choice, really.

And every year, without fail, I’d begrudgingly make some of the stuff in my horrible apartment, and think, “Wow. This is the best goddamn popping corn I’ve ever tasted in my life.” Is that just revisionist memory, or is the stuff really freakishly good? It’s the way I remember it.

Folks are all the time bringing brochures to work, and asking their co-workers to buy something — usually for their kids’ sports teams, or whatever. I’m almost an automatic no, which helps screen me from most of it. Hopefully this Girl Scout cookie purchase won’t ruin my hard-earned reputation…

Just a few weeks ago someone thrust a flier in my hand for a bunch of super-expensive chocolates; the cheapest thing was about fifteen bucks. I just handed it back to him, and said, “Good luck.” Is that assholey? It’s a little bit assholey, isn’t it? But fifteen dollars — or more — is a lot to ask, in my opinion.

What’s the craziest thing someone has tried to sell you at work? I don’t mind the box of one-dollar candy bars on someone’s desk, but don’t generally care for the brochures. What’s your opinion on this subject? Do you have any stories to tell about fundraising co-workers? Please tell us about it.

And speaking of that… I revamped the Souvenir Shop page yesterday. Check it out. None of the stuff is as good as Thin Mints, admittedly, but the shirts and books are pretty good, I think.

Now I need to hit the devil’s parkway, and get back to my job.