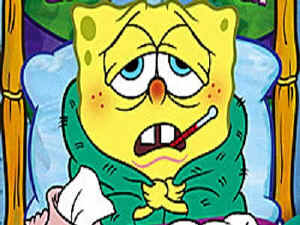 Yeah, I’m sick.  I have the suds, or something.  My shift at work last night felt like it went on for eighteen or sixteen hours.  It sucked, and I just wanted to go home and get in bed with a smelly border collie at my feet.

I’m going back tonight, because I’m expected to be there.  I don’t miss work, unless I’m in an iron lung or something.  I’m from West Virginia.

I know, I know.  Sick people should stay home, for the benefit of their co-workers.  But it’s not like I have SARS, or something.  It’s just a bad cold, most likely contracted via translucent booger-hook residue.  And I’m not missing work because of a cold.  It’s out o’ the question.

Toney and the younger boy went out with Sunshine and Mumbles, for “lunch.”  Of course, it’s never that simple.  Sunny always (always!) wants to go to Wal-Mart when she leaves the house, and usually spends hours there.

The boy just sent me a text message that said, “This is about as much fun as being hospitalized.”  Heh.

A few minutes later, Toney called and said she was so mad she thought she might have a stroke.  Sunny was insisting that we take them out for an expensive dinner in a restaurant tomorrow night, and was insinuating that we’re cheap.  After everything we’ve done…

Toney is about to start snapping necks, like Sayid.

I wish I had a photo of Sunshine, so you guys could see the way she was dressed when they left here this morning.  She looked like a bag lady, with all sorts of flowing hippie robes layered on top of each other.  A few of them probably cost more than a hundred bucks, but she looked like a homeless person.

And she had a freaking hand muff, if you can believe it.  I don’t think I’d ever seen one of those things in real life; I’d only seen them in children’s books.  Pure, undiluted crazy…

And speaking of that…  A couple of nights ago at work, two of my worlds almost collided.  We were in the break room having “lunch” (7:30 pm), and someone started talking about the People of Wal-Mart site.  Someone had one of the pics on their phone, and began passing it around the table.  It was a woman with no shirt, and her pants pulled up real high, to cover her sagging breasts.

Then a girl who is about twenty years old said, “Have you guys seen the Wal-Mart Game?!  Oh my god, it’s hilarious!”  But everyone seemed oblivious, so she quickly dropped it.  And I just sat there silently, blinking real fast.

I need to go to work now, so I’m gonna stop right here.  Sorry this one is so short, but I’m working double-duty today, for Surf Report VIPs.

As for a Question, why not supply us with some of the Further Evidence links you’ve found recently.  A lot of you send them to me via email, and I appreciate it.  But I have a feeling I miss a ton of greatness/weirdness on the web.  So, please bring me up to date.

And I’m going to report for another eighteen or sixteen hour workday, and will see you guys again tomorrow.