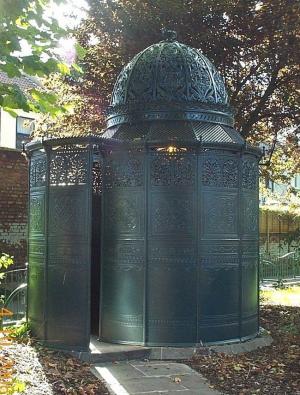 I didn’t even know these things existed, especially as far back as the 1880s. I thought people just pissed in the street back then, like they do in Atlanta today?

I appreciate the workmanship; we don’t even bother to build houses as nice as the pee huts of the late 19th Century. They were reportedly called Temples of Convenience, or Temples of Relief. Fancy, fancy. “I say, I must beg your indulgence while I pop into a temple, or else I will surely soil my pantaloons.”

Some look like upgraded versions of one-holer outhouses, which I could embrace in an emergency. But others appear to be larger and more menacing. After the sun goes down, I have a feeling some of those Temples of Relief turned into Sheds of Power-Sodomy. Perhaps I’m just paranoid, but I’m envisioning Victorian men with handlebar mustaches emerging from those things in tears, holding bloody rags to their asses. As Jack the Butthole Ripper silently slips away into the darkness and fog.

Have you ever encountered a street urinal, similar to the ones in this gallery of photos? It surprises me they were so forward with it, and put these Urination Shacks right out on public thoroughfares. As late as the 1970s they wouldn’t even show a toilet on American TV; I thought the Brady kids must have used the sink or a Folger’s can. Such blatant acknowledgment of bodily functions, during the 1800s, seems improbable to me.

Props to these guys for their superior work chronicling the places we peed during days gone by!