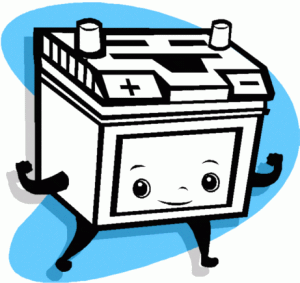 So, I ran all my errands yesterday afternoon, starting at Moe’s for a cannonball of goodness, and ending at the gas station for $25 worth of 87 octane.  For some reason I never fill my tank anymore, I just buy in $25 increments.  I think it has to do with the depression that sets in after watching $70 sucked from my bank account in two minutes flat.

In any case, I bought my latest $25 worth of fuel and jumped behind the wheel.  I was right on time, despite all the stuff I’d crammed into the day already.  I should be arriving at work roughly ten minutes early, which is perfect.  Ten minutes early is right in the zone.

Feeling pretty good about things, I turned the key and everything was deader than Kelsey’s nuts.  Sitting right there at Sheetz, pump number 4.

What the hell??  It acted like the battery was totally dead.  There wasn’t even a clicking sound, or anything.  But the battery is new.  I just had it replaced a couple of months ago, for some enormous amount of money — $150 or thereabouts.  How could it have gone all Kelsey’s on me already?

I called Toney, and she didn’t answer.  I sent her a text, and she didn’t respond.  I called her again, and nothing.  Dammit!  I thought about calling AAA, but was pretty sure I just needed a jump.  Maybe I could ask one of these other Sheetzsters?   No, I hate when strangers ask me to jump their cars.  It would be hypocritical to turn around and do it to someone else.

Finally, Toney called me back and my car fired right up when I hooked up the jumper cables.  But there was loads of crap all over the battery, possibly acid.  Was it leaking?  Hell if I know.  Who do I look like, Sgt. Goodwrench or whatever?

Infuriated, I told Toney I was going straight to the garage where I bought the battery.  No way was I getting stranded in Wilkes-Barre at 1:30 in the morning, after work.  I was all whipped-up, because I’d paid my $150 protection money, which should have sheltered me from boolshit like this.

I told the guy my story, and he said, “Starter.”  Nothing else, just that one word.  He was already irritating me.

“How much are we talking?” I asked.

“One seventy-five, two,” he answered.  Oh, this guy was quite the conversationalist.

“But there’s shit all over the battery, and it’s new.  I think it might be leaking.”

“We’ll take a look, but it sounds like a starter to me.”

Grrr…  I sat down and texted my boss that I would either be late, or not in at all.  If I was going to fork over $200 to these guys, I wasn’t going to work.  For some reason that seemed logical to me at the time.

About fifteen minutes later an almost perfectly-round man appeared before me.  “You with the Camry?” he said.

“Yes, I’m with it,” I almost said, but left the last part off when I actually spoke.

“I don’t know who put that battery in for you, but they did a lousy job.  All that corrosion was from the previous battery.  It wasn’t even cleaned up, and you weren’t getting a good connection because of it.  I could tell by the way it was acting, when I started it,” he explained.

“You guys put it in!” I practically shouted.  “I bought it here, a couple months ago.  I paid a hundred fitty dollars!”  I was getting all cranked up about a battery that wouldn’t crank.

“Oh,” he said, obviously a little uncomfortable.  “Well, I cleaned it up real good for you, and you shouldn’t have any more trouble with it.  The battery is in great shape, it was just a connection problem.”

See?  This is the kind of thing that makes my blood pressure ratchet upward all the time.  It seems like I’m all the time taking things back, after it was half-assed the first time.  I had an oil change at that same place a few months ago (same day I bought the battery, I think), and my car was leaking oil on our driveway.  They’d done something wrong with the oil filter, or something.  I mean, what the hell??

It’s constant.  It seems like everything has to be done a second time, because the first attempt was botched.  Have you noticed this, or am I just the lucky one?

Bastards!  At least I didn’t have to pay the “one seventy five, two” for a new starter, though.  And since that didn’t happen, I went to work.  I was two hours late, despite my stellar performance earlier in the day.  But my car started at 1:30 in the morning, which was a surprise.

We’ll see what happens in a few minutes, when I leave for work again.  A full Kelsey’s wouldn’t surprise me, it really wouldn’t.