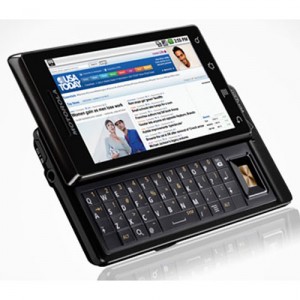 I believe I’ve mentioned that my Verizon contract is almost finished, and I’m now able to choose another phone.  In exchange, of course, for signing a fresh two-year deal with my cellular overlords.

And this has triggered much research, and reading of internet reviews.  I want to move up to a smartphone, and would really like the Motorola Droid.  But the thing is so expensive (my cost: $199), it’s hard to accept.  Especially when you factor in the so-called “data pack” needed to run that monster.

It’s an unjustifiable proposition, in my opinion.

So, I’ve been reading about the less-costly HTC Droid.  I could get it for $79, and the reviews are almost unanimously positive.

The only downside?  I do a lot of texting, and the HTC has a virtual keyboard.  Meaning it has a cartoon likeness of a keyboard, as opposed to a real one.  And I don’t like the sound of that, not one tiny bit.

As is the tradition, I’ve been agonizing about all this boolshit.  I keep vacillating between what I really want, and the more sensible option.

I say to myself: “What’s a hundred twenty bucks in the grand scheme of things?  Just cut out Milky Ways from the vending machines at work, and you’ll pay for it in no time.”

Then I counter:  “Are you freaking insane?  What do you need a two hundred dollar phone for?  Who do you think you are, someone important?”  I’m not very nice to myself, if you want to know the truth.

All these internal conversations were starting to drive me crazier, and I decided to make a final decision on Saturday.  I would go to the Verizon Store, I announced to myself, and play around with that virtual keyboard one final time.  And if it wasn’t too bad, I’d just go with the HTC.

So, I went over there, and some khaki-pants wearing sumbitch, with a lanyard around his neck, descended upon me within seconds.

“Can I help you with anything?” he asked.

“May I ask you which company you’re using as a cable provider?” he answered.

WTF?  I just told this guy I didn’t need or want to talk with him, and that I was interested in phones.  So, what does he do?  He continues talking — about cable TV.

“Hey man, I’m here to play around with the cell phones.  Nothing else.  I’m not going to change my cable company,” I replied.

“Can I ask how much you pay per month for service?”

I said nothing, but something in my expression caused him to retreat.  “If I can be of any assistance, just ask,” he said, while walking backwards.

Grrr… That place is as bad as the old Circuit City.  Every time I went into one of those stores, some lanyard bastard would instantly suction himself to me.  And it got to the point where I stayed away, for that specific reason.

In fact, I don’t do business with the Verizon Store, either.  I just go there to hold phones in my hands, and test ’em out.  Actually dealing with those pushy, condescending fucks?  Never!  In addition to their overbearing demeanor, they’ll also bend you over the proverbial couch with fees:

“Yes, the phone is $79, final cost.  But that’s with a $200 mail-in rebate.  Also, there will be a transfer fee, reconnection fee, and commission-enhancement charge.  Can I also interest you in an extended warranty, or insurance policy?  I highly recommend both, because I get 25% of whatever add-ons I can squeeze out of you dumbass rubes…”  On and on it goes.

And at the website it’s just $79, with none of that other nonsense.  Doing actual business in one of their stores is for SUCKERS!  Shit, I’m getting all worked-up here…

In any case, I didn’t like the virtual keyboard, but tried to convince myself I’d get used to it.  I’m sure it’s fine, I mumbled, knowing it would likely drive me up the wall.  For two long years.

But I decided I was finally going to bite the bullet, and order the HTC.  I went home and logged onto the Verizon website, and had questions about our family plan.  I’d received a letter telling me I could upgrade, but what about the other three lines?

So, I called their customer service number, bracing for a hard-sell, etc.  But it was completely positive.  The woman, who may or may not have been named Ticonderoga (that’s how I remember it, but how could it possibly be?), was extremely helpful and friendly.

I told her my situation, and she took a look at my account.  Then she suggested I wait until March 31, before taking any action.  At that point I’ll pass some kind of different threshold, and will be eligible for all sorts of added goodies.

The cost of the Motorola Droid will become $99(!), and I’ll be able to choose any other phone they sell — for free.  Any phone, including another Droid, if I want.

So, Toney will be able to pick out something kick-ass, for no additional cost.  And the phone the Secrets want, the enV Touch, will also be completely free.  Final price for four new top o’ the line phones:  $99.

Would lanyard boy have surrendered so much important information?  Ha!

So, yeah.  I’m happy with Verizon right now.  We’ve been with them for years, and have no issue with their service, whatsoever.  If I can just stay out of their stores, we’ll likely stay with them for many years to come.  But it’s in their best interest that I stay out of their stores…  ‘Cause I’ve been known to get irritated by something, and write off an entire corporation for life.

Are you happy with your cell phone?  What do you have?  Are you satisfied with your provider?  Are you getting a good deal from them?  What about horror stories?  They’re always fun.  Tell us all about it in the comments.