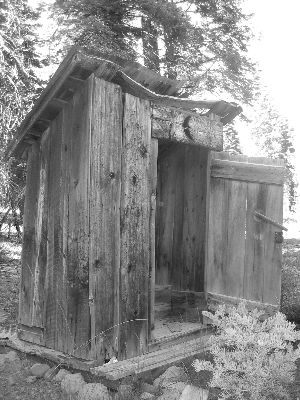 Hello Surf Reporters!  A couple of weeks ago I posted part of a chapter I’d cut from my latest book project, which dealt with my young hooligan days in Dunbar.  You can read it here.  I’ve decided to go a different direction with the project, so a lot of the original stuff is hitting the cutting room floor.  Today I’m going to share with you another hunk of it.  This is unpolished first-draft material, but I think there’s still a few laughs to be had.  I hope you enjoy it.  -Jeff

While it’s true that, compared to many West Virginians, we were “city folk,” it would be inaccurate to say we had no connection to rural life. Luckily for me, however, we weren’t forced to indulge in it very often. I’m not exactly a rugged outdoorsman…

My grandmother’s sister lived way out some godforsaken holler, maybe thirty or forty miles from Dunbar. She was a nice woman, and I liked her, but she lived in a perpetual 1887. Why? I never understood the appeal.

To get there we had to drive through the rushing waters of a creek (pronounced “crick”), twice. We went through it, traveled another few miles on a crumbling blacktop road, and across the same creek again. I enjoyed this novelty, but was also convinced we might be swept away, and end up dead, bloated, and bobbing in the Ohio River.

Eventually the pavement ended, and we were driving on a dirt road. Sometimes a piece of pre-Depression farm equipment would approach in the opposite direction, and we’d have to pull far into the weeds to let it pass. It was excruciating. I was certain we’d get stuck there, and a frenzied team of wild boars would start ramming our vehicle.

Sometimes my dad would laugh and call me a “fancy lad.” But I preferred “realist.”

The house was on top of a hill, and we had to walk along a wooded path on a 35-degree angle to get there. I felt like I was covered in ticks by the time we reached the clearing, and thought I spotted snakes in my peripheral vision from the moment we stepped outside the car. The place was lousy with copperhead snakes. Somehow I knew this to be true.

The first thing we passed was a red hand pump sticking out of the ground. It’s where they “drew” water. Yeah, who the hell knows?
Then there was a boarded-up outbuilding that looked like it hadn’t been used in decades. It was once painted white, but was now gray and dingy. Someone told me the building was a country store during the 1930s, and I had fantasies about going in there and discovering a cache of unopened baseball card packs. Each loaded with super-rare Babe Ruth, Lou Gehrig, and Joe DiMaggio beauties. But I never mentioned it, because I was certain the shack was full of black widow spiders.

Next was an honest-to-god outhouse. It was a two-seater, which always blew my mind. I could just imagine two people sitting in there, like they were on a Greyhound bus, taking synchronized dumps. When I was peeing inside that horrible thing, I could see down into the hole, and years and years of human waste a-glistening. It was nothing short of traumatic.

Before reaching the house there was a heavy door built into the side of a mountain. It was almost like a bank vault door, but made of wood and metal. Inside was a hollowed-out room with the walls, floor, and ceiling made of earth. Against the dirt-walls were shelves covered in jars of vegetables. It’s what they ate during the winter, when the ground was frozen and covered in snow.

The house was small, with a tin roof. There was no indoor plumbing (obviously), but they had electricity and a refrigerator. The place was heated by an ancient coal stove in the living room, and all the walls were covered in paper that looked like it was from the Bonnie & Clyde era. It always smelled damp inside, and I could usually hear bees buzzing, for some reason.

It was like traveling back in time. I was constantly ill-at-ease out there, but did manage to collect a few pleasant memories. I can remember my grandfather snapping photos with his expensive off-limits-to-the-kids camera, including a few of me sitting on a big rock in the front yard. I loved that man. And I remember the adults making homemade ice cream with a hand-crank apparatus. So incredibly good…

And I recall walking to a cemetery with some of my country cousins, and seeing headstones that dated back to the early 1800s. It was a creepy place, but the cool kind of creepy… Except for the electrical hook-up at the house, I suspected that everything was largely unchanged since the days the oldest of those stones were laid.

Whenever I let down my guard for a few minutes, and stopped watching out for the kinds of snakes that could stand up and chase your ass down a road (which I’d seen on Wild Kingdom), I appreciated the history of the place. It was, after all, where my grandmother had been a little girl, an almost literal glimpse of her early life. It was the land that time forgot… just thirty or forty miles from home.

Also, when I was young my great-grandmother on my dad’s side was still alive, and we would visit her once every summer. And, as difficult as it might be to believe, this place was even more remote than my grandmother’s sister’s house.

MawMaw Racer, as she was known, lived far away, but still inside West Virginia somewhere. We’d drive for a couple of hours, the last part in the sticks, and park our car. Then we’d have to get out and start walking, because these folks lived on a farm so removed from civilization, roads didn’t go there.

There were usually several carloads of us on these trips, with aunts and uncles and cousins along for the “fun.” And we were required to climb fences (I’m not kidding), follow trails through the woods, and cross grassy pastures – with bulls wandering around.

Whatever color shirt I happened to be wearing that day, my dad always announced was the exact color bulls hate the most. Every year it was a different color, and every year I fell for it. He enjoyed yanking my fancy lad chain (with tassel).

I remember one of my not-so-petite aunts tumbling over a fence on one of those ridiculous excursions. A bull was on the move, and she took off running and tried to spring across a gate. But she got tangled up in the process, was momentarily stuck near the top, and went down the other side like a 200-pound sack of turnips.

After everyone stopped laughing, roughly ten minutes later, someone went to check on her. Hey, she was fine… She just needed to walk it off.

My great-grandmother wasn’t at all friendly, not even a tiny bit. She was a severe woman, with a frozen frown. She made that lady in the American Gothic painting seem like Phyllis Diller. My brother and I would try to talk with her, expecting the kind of loving reaction we’d get from our grandmother, and it was not pretty. She apparently didn’t like children, or much of anything, for that matter. It was pretty close to “Go away, kid. You bother me.”

She also used snuff, like a man. In fact, I remember her using a toothbrush when she was adding another load of it between her cheek and gum. I’ve asked my brother and parents about this, and they imply that I’m embellishing the story. But I clearly remember her packing her jaw with tobacco, using a toothbrush as a packing tool. How could I imagine such a thing?

I can also remember peeing outside while we were there. I don’t know why. I’m sure there was an outhouse, but can’t recall ever using it. All the males just found a convenient spot, and let ‘er rip.

And I stepped in cow shit once, in my bare feet. It was cold, and squished between my toes. Everyone thought that was the absolute pinnacle of comedy, but I failed to see the humor. Also, I can’t imagine why I was walking around barefoot, considering all the outdoor waste elimination going on in that place.

MawMaw Racer’s husband was nice, but (as they used to say) “touched” in the head. His name was Sam, and I liked him. He was always smiling and laughing, even when nothing funny had happened. His demented good nature was welcome relief from the grim reaper with the toothbrush.

One time we were all sitting on the front porch talking and drinking iced tea, when Sam suddenly cocked his head like a dog, and acted like he was receiving a signal. Then he took off running, as hard as he could go, way out into the middle of a large field. I could hear the legs of his overalls rubbing together: whish, whish, whish, whish… When he finally stopped, he dropped to his knees and shouted, “I hear you, Jesus! I can hear you!!”

Shaken, we all looked to MawMaw Racer for more information, and she just shrugged and said, “Sometimes he thinks he hears Jesus talking.”

For reasons unknown, Sam also turned in circles while walking downhill. He’d walk normally when the ground was level, but started going ‘round and ‘round when he reached a slope.

And there is a family legend that says he was so backwards and thick, he didn’t know how to get into a car. Supposedly he was trying once, and didn’t realize you had to crouch down to climb into the seat. So he just repeatedly walked into the side of the vehicle, standing straight up, bouncing off again and again. I’m not sure I believe this, but would love for it to be true.

Whenever we made one of our day-trips to “the country,” Dunbar looked even better than normal when we returned. Folks out mowing their manicured lawns… Paved roads wide enough for two cars… Toilets inside the house, without even the tiniest threat of a scrotal splinter… It felt like paradise, and I always breathed a sigh of relief.