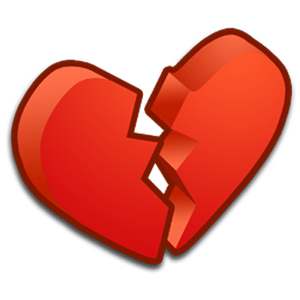 Thankfully, I don’t have an abundance of experience with this one…  Across my adult life I’ve had three long-term relationships, so I’ve only had to endure the pain of a breakup three times (twice with the first girl, once with the second).  But I promise you… I don’t do well with it.

The first time it happened I was plunged into the kind of blackness I didn’t even realize existed.  I literally didn’t want to get out of bed in the mornings, and nothing could make me happy.  I just sat around sighing all the time.  Everything reminded me of my girlfriend and all the amazing stuff we’d experienced together.  And now it was all gone.  I couldn’t listen to music, because every lyric made me cry.  Probably even Weird Al.

I was a goddamn mess.

The second time was just as bad, with a side order of humiliation.  We were attempting a long-distance relationship — I was in Greensboro and she was still in Dunbar.  One weekend she came for a visit, and within the first two hours, we were done.  She said she had feelings for another guy, and I told her to get the fuck out.  Actually, that was SCREAMED, with my full diaphragm behind it.

She left crying, and ten minutes later I took off after her — wanting to talk it out.  I already regretted the way I’d reacted, and hoped to have a conversation with her before she was completely gone from my life.  We’d been together six years, and I didn’t want it to end with “GET THE FUCK OUT!”  So, I went ripping down the interstate, weaving between cars, and driving like a maniac.

Yeah, I never caught up with her.  I don’t even know if she immediately headed home.  She could’ve gone to Shoney’s for lunch.  Who the hell knows?  It was all a crazy blur.

But I did something really stupid when I returned to Greensboro.  I went to Peaches, the record store where I worked.  I didn’t want to go back to my empty apartment, I guess, and decided to go to work instead.  I was sitting at my desk in one of the back offices, and completely melted down like Steve Bosell.  In front of Brad, and my boss Jeff.  It was a pathetic display.

It took me a long time to recover from that breakup.  I was — as they say — adrift.  It was a bad period of my life.

And my (hopefully) final breakup was also ugly.  Lots of hollering and insults and accusations…  It was in Atlanta, and we were living together in a tiny apartment, across the hall from the pre-Grammy Awards Arrested Development.  After that nasty-ass fight (I’d taken a scorched-earth approach), she left for a few days, and it was just me and her cat.

I liked the cat OK, but she knew something was wrong.  And she made weird crying noises every few minutes, the whole time my girlfriend was gone.  It was awful.

After they (the girl and the cat) moved out I went spiraling down the proverbial rabbit hole, and nearly drank myself into oblivion.  I also “dated” a lot — aggressively and for spite — and it was a bad, awkward time.

It was during that period when I was at a woman’s apartment, nursing a beer on the couch, when she came walking into the room completely naked, and said, “Tonight, I want to explore your body.”  After I stopped laughing, I realized I had no attraction to this person whatsoever.  And I spent the next hour trying to avoid having sex with her.

I was partially successful, thank you very much, and couldn’t get out of there fast enough.  It was a mixed-up half-a-year, full of mental illness and alcohol abuse and desperation.  And it’s hopefully something I’ll never have to experience again.

And now, it’s your turn.  If you feel like sharing, on this international day of love (or whatever), please tell us your breakup stories.  Use the comments link below.

Also, I’d like to know your favorite breakup albums.  One of my faves is fairly obscure, by a band called Local H.  The album is called 12 Angry Months, and it’s all about a breakup — the good, the bad, and the ugly.  Here’s someone’s homemade video of the first song.  It’s a great record, and I recommend it highly.  What are some other worthwhile albums on the subject?  Please tell us about it.