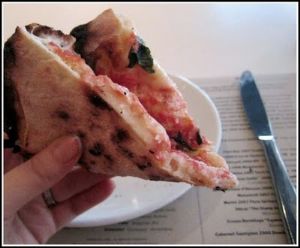 Another thing I don’t like:  pizza folders.  What in the everlovin’ hell is that about??  I saw someone do this a few days ago and, even though I didn’t know the person, I instantly had a negative opinion of him.  I realize it’s irrational, and probably not fair, but too bad.  Pizza folders bother me.  I put them in the same category as people who back into parking spaces.

I’m sure some of you belong to the Folders Brotherhood, and are probably squinting at me right now.  And every time I mention the parking space thing, I get two or three emails or comments from people explaining (in condescending tones) why backing is better.  Ha!  If you think you’re going to convince me at this late date, you’re sadly mistaken.  My prejudices are cast in stone.

Luckily, however, they’re all fairly shallow, and I’m often convinced to amend my initial judgments of people.  In fact, I work with a guy who folds, and I like him just fine.  He’s a good guy.  When there’s pizza I just try to avert my eyes, and clinch-up when I accidentally see him lifting a folded slice to his mouth.  But that’s as far as it goes.  I’m able to compensate.  Like someone with Asperger’s, or whatever.

I have many, many such things in the hopper o’ fucked-upness.  And I have a feeling most of you guys do, as well. You’re Surf Reporters, after all.  So, in the comments section, please tell us about your prejudices.  One request, though.  Please don’t bring politics or general ugliness (you know what I’m talking about) into the discussion.  We don’t need more of that crap.  Let’s just keep it to annoying little habits,  and that sort of thing.  Stuff that makes you form an instant opinion about complete strangers…  OK?  Thank you for your attention to this matter.

I’m returning to work today for the first time since last Wednesday.  I had to take a few days off, to tend to some fambly stuff.  But I’m working tonight, and will then be off again until Sunday evening.  It’s a schedule I could get used to…  Just one workday every eleven calendar days.  That’s good stuff.

Unfortunately, I need to go in early again, to attend a meeting that’s apparently been turned into a weekly affair.  So, I’m going to have to stop here.