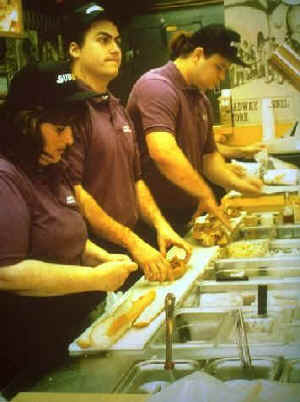 A few days ago I walked up to an ATM machine, punched in my PIN number, and etc.  I told the thing I wanted twenty bucks, and it gave me two tens.

Usually it spits out twenties, but this time it was two tens.  Huh.  Was it out of larger bills, I wondered?  Or did they reprogram it for some reason?  And if they reprogrammed it, why?  What’s their angle on this?  How are they benefiting?

These are the kinds of things I think about all day.

Then I went to Subway, ordered a twelve-inch BMT on white bread (I refuse to call it Italian), with lettuce, tomato, onions, and green peppers.

“No, because I can’t trust you.  I wouldn’t mind a little mustard, but you’d go to town with it and completely ruin my lunch.  Oh, I’ve been around, pal, and know how these things go.  You Subway folk don’t know moderation when it comes to the sauces and whatnot.  So I’d rather just go without, than to eat a goddamn foot of mustard,” I said inside me head.

He removed his hand prophylactics and tried to sell me all manner of add-ons:  drinks, cookies, chips, possibly a cantaloupe (I can’t remember).  I rejected them all, and he rang me up.

“Do you have a Subway Club card?” he wanted to know.

“No I don’t, because I am a man.  I’d rather put a bullet through my head than to carry around a membership card for a sandwich club.  Seriously, I can’t think of anything douchier.  Real men, with actual balls, don’t join submarine sandwich consortiums,” I said inside my head.

I handed him one of the tens, and 62 cents rolled down a curved chute and came to rest in a container at the bottom.  Apparently it was going to be up to me to scoop up my own change?  And isn’t that kind of rude?  It’s one step above just throwing it in the floor.

The guy was telling me how I could use my Subway Club points to get free food, or if I let them build up over time I could get things like mp3 players, etc.  He said I should check out their website when I get home, and I lied and told him I would.

Toney wanted me to pick up something at the grocery store, so I went there next.  And when I got to the self-checkout (I now go out of my way to avoid living, breathing cashiers) I realized the Subway dude didn’t give me my three dollars.  All the change I’d received was what came down the coin flume.

There was something, deep inside my brain, that told me the same guy had almost “forgotten” my change once before.  I couldn’t remember it clearly, but I sorta recalled him becoming extra-talkative during the ringing-up process, and nearly “forgetting” to give me my folding money.

I’m going back there, I decided.  No way I’m allowing someone to scam me in such an old-school Paper Moon manner.  Those three dollars — my three dollars — are probably already inside his pocket, I knew, and this caused steam to come blasting from my ears.

I power-walked to the car, preparing for battle.  I’d either be leaving that sandwich shop with my money, or in handcuffs.

Then I had to wait until a Civil War veteran backed his Buick LeViathan from a parking space at 1 mph, and finally, eventually got out of my way.  Maybe he was preoccupied with his musket, I don’t know.

And there was a mini-traffic jam near the front of the store, because lazy bastards stop their cars there and load their groceries.  “The parking spaces are right over there!” I want to yell.  “You seriously can’t walk another ten yards?”

I nearly ran over a woman with her head cocked to one side, holding a cell phone between her shoulder and ear.  She’d darted in front of my car, but gave me a dirty look.  And so it goes.

After I negotiated that particular cluster, I realized I’d now have to wait for the world’s longest red light, and somehow cross a non-stop parade of traffic to enter the Subway parking lot.  What a gigantic hassle.

I drove the length of the driveway leading to the stoplight, thinking about my upcoming “conversation” with the sandwich artists.  And I could hear the manager:  “I’ll have to wait until I close out this cash register, sir, to see if we’re over by three dollars.  I’d be glad to take your phone number, and call you,” and so on.

And at the very last second, before I had to commit to my planned course of action, I turned right on red and headed home.

Screw it.  It’s only three dollars.