I realize I’m late with this report, but there was a little something called Christmas that happened since this spectacle took place. So, I hope you’ll give me a bit of slack. Sheesh. In any case, I met a couple of friends at Long John Silver’s last Sunday to see how much damage we could inflict by taking advantage of their new All You Can Eat deal. Here’s how it works:

On Sundays between 11 am and 7 pm, at participating locations, you can go in and order the normal Chicken Plank dinner, or Fish and Chip dinner. They cost $7.99 each and come with your choice of two sides. The standard is fries and cole slaw, but they have other bizarre things to choose from, like green beans ‘n’ shit like that. They used to have tiny corn on the cobs — known as cobbettes. But those are gone, as far as I can tell. Our store offered pierogis if you can believe it. Completely ludicrous.

So, you start out as normal. But you have to be careful, ’cause that initial visit to the counter locks you in. When you return to the trough you can only order additional servings of whatever you first chose. So, you can’t be switching it up and going with chicken this time and fish the next time, and you’re not allowed to power through the full assortment of side items. It’s all set in stone with your first order. Those are the parameters, and we quickly learned there’s no wiggle-room. Oh, they run a tight pirate ship at the LJS. 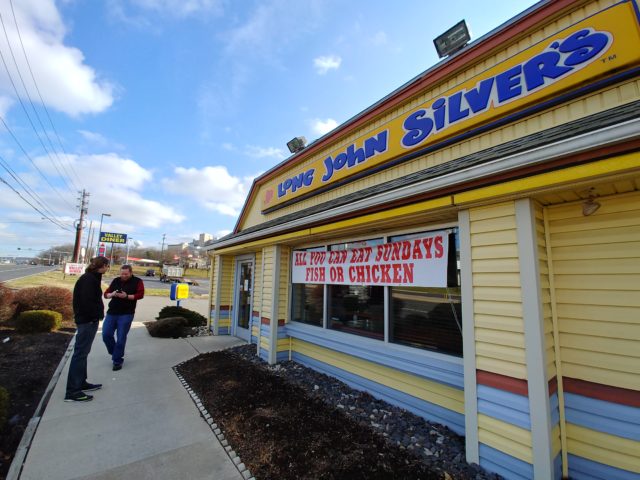 Here are my partners in gluttony: Mike and Ryan. Mike (on the right, looking at his phone) has a well-deserved reputation for stunt eating (my term). His standard order at McDonald’s:

That’s not for laughs, it’s for dinner. Just for him. Every time. So, Ryan and I were excited to see what might happen when he’s unleashed on all you can eat planks. Oh, this was going to be good! We talked about maybe calling ahead and warning them, so they could adjust their staffing levels, etc. But we decided to just let everything happen organically.

As I was driving to the restaurant in Wilkes-Barre I received a text from Mike telling me he’s in the parking lot doing his “pre-meal stretches.” Heh.

Below is how I played it: just the standard dinner. A couple of notes… The fries are notoriously bad and also filling. I thought about going with a scoop of corn or something like that, which would theoretically allow more room for planks and maybe translate to a higher final count. I knew I’d probably come in last in Plank Count, ’cause I can’t eat enormous amounts of salt and grease in one sitting. But I didn’t want to totally embarrass myself. However, I ended up just going with the tried and true. It’s what I know, and didn’t want to overthink things. Also, the drinks were extra, and the final cost was $10.90 for each of us. Damn! That’s a lotta extra loot for six cents worth of soda. 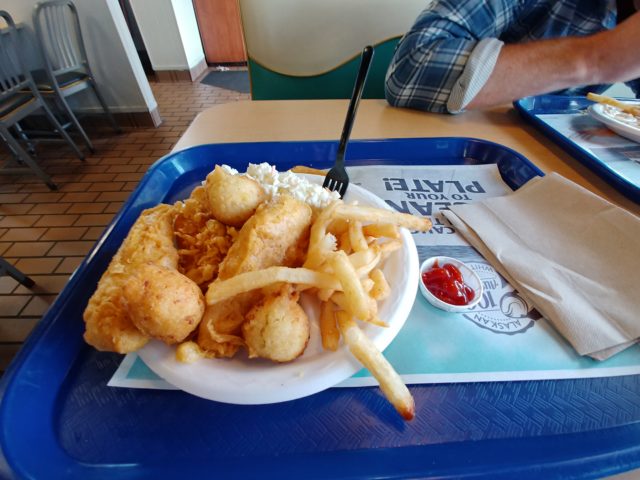 You can see that the planks are fairly large. Larger than I realized. You get three the first time, and after I finished off everything in the photo I already felt a little wobbly. Man, this wasn’t going to be good for me. If I wasn’t careful I might puke, or worse. I could already feel the sodium working its magic in me. I was almost certain fluid was starting to build up in my lower legs.

But I returned to the counter, of course. I mean… that’s the point, right? They only give you two planks on return visits, I learned. Which was fine by me. They also give you additional servings of all the sides you first ordered, as well as a load of those delicious hushpuppies. They’re not stupid. I polished off round two and felt like I was pushing my luck. There was a very good chance I’d shit myself during the drive home. I felt… not completely sick, but sick-adjacent. I was done, I proclaimed. “Pussy!” Ryan shouted. 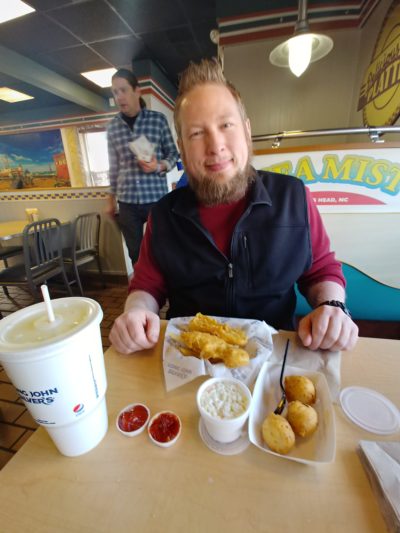 Here are the final two contestants, in action. It’s my favorite photo, ’cause you can see the anguish on Ryan’s face. This is late in the palooza, and he’s struggling. But Mike? No issues. Keep ’em coming!

During the final stretch, we decided they were playing mind games with us. Ryan attempted to charm the cashier into allowing a plank/fish switch, and she would not be swayed. Would not even entertain the thought. What’s the story with that?? Also, we’re pretty sure they employed the following “tricks” to keep the Plank Count as low as possible: 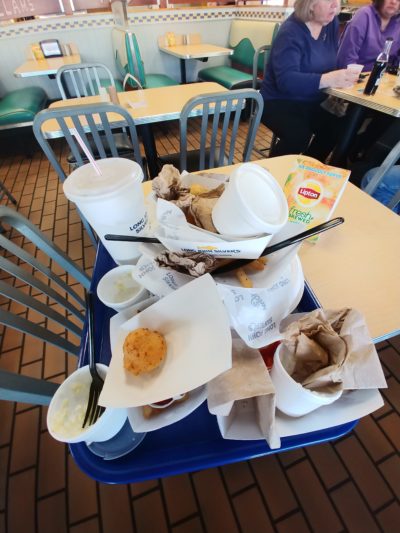 Ryan hit the wall second, of course. And eventually, even Mike threw in the grease towel. Here’s the trash we generated. And here are the final Plank Stats:

One thing to keep in mind… the family meal, which is supposed to feed, you know, an American family comes with eight planks. And Mike had eleven. Ryan did very well, also. I got my money’s worth but wasn’t totally happy with my performance. Also, I felt like crap for the rest of the day. And holy hell, the thirst! I couldn’t get enough water. Blecch. I don’t think I’ll be returning to Long John Silver’s for at least… a few more days. OK, maybe today. We’ll see.

Final note: While we were in the parking lot, doing a recap of the fesitivies, Mike said he should now go through the drive-through and order something, just to see their reaction. Ha! I wish he’d done it.

And that’s the report. I hope you enjoyed it. I posted a new podcast at midnight, too. You can listen to it here, or wherever you get podcasts. Also, please don’t forget to use our Amazon links while redeeming your gift cards, or whatever. Just click through and shop as normal. It’s an easy and painless way to support the Surf Report.

For a Question, I’d just like to know about your experience with stunt eating. Have you personally participated, or possibly witnessed, a remarkable feeding frenzy? If so, please tell us about it in the comments.