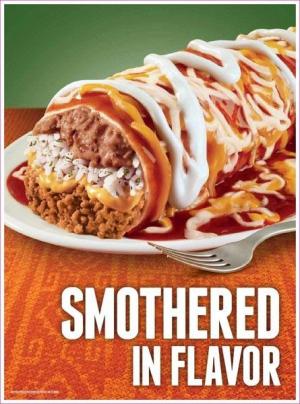 When I lived in California there was a Taco Bell a couple of blocks from my job, and a co-worker who frequently asked me to join him for lunch there. It was across the street from Warner Bros. Studios, and the walls of the restaurant were lined with autographed photos of “celebrities.” You know, top-tier talent like Gunther from Friends.

I was staunchly pro-Taco Bell, and still am, but didn’t much enjoy those California lunches for some reason. At first I blamed it on the conversation, but eventually decided there were other problems.

For one thing, there’s a myth that Taco Bell is inexpensive. People believe that as an absolute fact, and are wrong. It seems like it used to be cheap, during the 1980s, but not anymore. Every time I went there it felt like I’d either a) spent about 25% too much, or b) kept my eye on the bottom-line, and walked away hungry.

Also, I learned I don’t really like Taco Bell in the light of day. It’s fantastic after the sun goes down, and gets even better if there’s a beer component to the evening. But during the middle of the workday, stone-cold sober? Not so much. Even Del Taco was preferable, and that’s saying something.

I was thinking about all this today, after Nell Carter told me my total was $5.19 for nothing but the new Smothered Burrito with chicken. No drink, no add-ons, no-nothing. $5.19! Once again, it felt like it was 25% too high. And I wasn’t even looking forward to it. I would’ve much rather gone to Wendy’s, down the street. Wendy’s holds up – even thrives – during the daylight hours.

Dudley Laywicker handed me a sack with a plastic container inside, and my inner-sensors told me it was a bit light. $5.19 should’ve triggered more of a gravitational pull. I was already developing a bad attitude toward this so-called burrito. 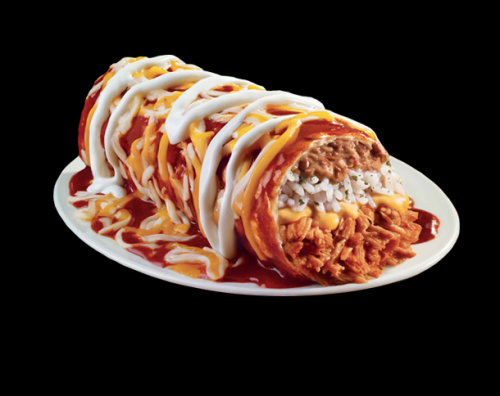 When I got it home about five minutes later, and removed the dome lid, I shouted to my dog, “Good god, Andy! It looks like afterbirth!” He lifted his snout in the air, took a reading, and left the room. I didn’t blame him. There was a strange smell wafting off that mess. 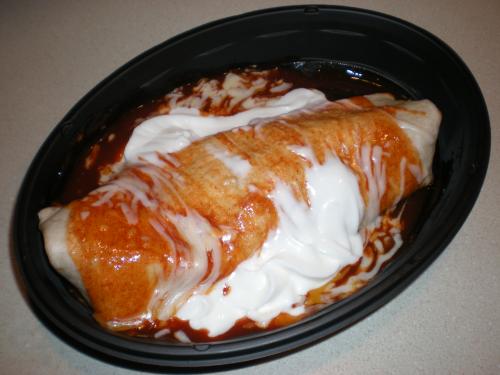 With a fork I cut off a bite-size chunk, and threw caution to the wind. And the shit was good. It was a full-blown Moroccan street-fair of flavors, with just a hint of spicy heat. I liked it, and ripped through the rest of that thing with enthusiasm. And despite my initial feelings on the matter, it wasn’t overly small. It pretty much filled the void in my gut, and was shockingly satisfying.

But will I buy it again? Absolutely not. I enjoyed the Smothered Burrito, but it tasted close to many other things Taco Bell offers up, at a higher price. I mean, they basically use the same five or six ingredients in everything, right? There’s more bang for the buck on their menu, without a doubt.

I enjoyed this item, even after I pre-judged it. The combination of flavors won me over. And it’s more food than I realized. In fact, I think it might be expanding in my stomach as I type this. It earns bonus points for producing great-tasting burps, too. Bravo! I’m experiencing the belches of kings.

However, it was way too expensive and looked like a placenta in a bucket. A weird funk rushed out when I lifted the dome, which was disconcerting. It was also salty as a mofo. Did I mention that? I don’t think I did. It feels like I ingested a week’s worth of sodium in one sitting. It might just be my imagination, but I think my legs are filling with fluid.

Have you tried the Smothered Burrito yet? If so, please share your thoughts in the comments section below. Also, what do you think is the best item on Taco Bell’s menu? THE best? And what’s the best bang for the buck there? Any opinions? Please tell us about it.