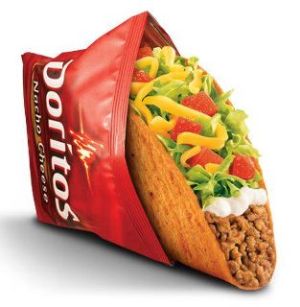 A few months ago Taco Bell announced they’d soon be unveiling a new taco that features a crunchy shell made of nacho-flavored Doritos.  It sounded fantastic, like one of those “Oh hell yes!  Why doesn’t this ALREADY exist?” situations.  And when the news was first being reported on the Internet, my email inbox was flooded with messages from folks who wanted to make sure I was in the ‘Oh hell yes!’ loop.

Clearly, the idea had touched a nerve.

So yeah, they’re messy and turn (at the very least) your fingers orange.  The thought of a taco shell constructed entirely of Doritos sounded delicious, but also a giant hassle.  It felt like I might need to be scrubbed down in one of those post-nuclear accident triage showers.  Yet I also suspected it would probably be worth it…

And today I finally experienced the awkwardly-named Taco Bell Doritos Locos Taco.  I went the Supreme route, and had them add sour cream and tomatoes.  Yum.  As you can see in the Ads vs. Reality comparison, it stacks up pretty well.  Reality isn’t far removed from the advertisement pic.  I was impressed.

I thought the price of $1.99 each was a bit high, though.  People think of Taco Bell as super-cheap, but it’s a myth.  Years ago it seemed inexpensive, but not now.  Of course I was usually drunk when I ate there, so who knows?  I probably just handed the cashier my wallet and told him to take whatever was needed to pay for what I ordered.  You know, since the Rolling Rocks had temporarily rendered me mathless.

Today I bought (while stone cold sober) just two tacos, and was a bit irritated to see it blow the hell out of a five dollar bill.  Two tacos is not a meal, yet it wiped-out the better part of my loosely-enforced daily lunch budget.  Simply not feasible in the real world…  I’d need three tacos and a soda, which would cost close to eight bucks.  Who am I, Ted Turner?

Despite the price, however, they looked pretty darn good.  The regular Taco Bell taco is sometimes a sad affair, but this Doritos version, with the Supreme fixins, was an appetizing sight to behold.  And it smelled good, too.  I was prepared to be blown away.

But it was only OK.  It certainly wasn’t bad, but I felt like it under-delivered.  A taco made with Doritos should be one of the greatest things in the world, right?  Well… it wasn’t.  It was better than the regular taco, but that’s not saying much.

The shell was salty, with a good amount of Doritos dust insinuated inside it.  But it didn’t taste like Doritos, not really.  Plus, it was thinner and more fragile.  With each bite a large section shattered like glass, and the guts were exposed.  It seemed to be fresher than the regular taco shell, though.

And it didn’t turn my fingers orange.  The shell isn’t REALLY made of Doritos, it’s more of a Doritos/regular taco shell hybrid.  Which is why the familiar nachos flavor is subdued.  Nobody from Taco Bell called me, but I would’ve suggested they punch-up the Doritos taste a bit.

I thought it was a perfectly fine, but was hoping to be speaking in tongues.  The pedigree suggests more.  And at two bucks each, I probably won’t be ordering them very often.  Maybe as a fatboy top-off, but certainly not for an everyday lunch…  It’s too much for too little.

It’s funny, though…  As I type out my opinion here, I find that it’s evolving a bit.  I was going to award the Taco Bell Doritos Locos Taco a C+, but I’ve reconsidered, based on the fantastic burps and belches I’m enjoying.  I know it’s kind of disgusting, but it’s the gift that keeps on giving.

Excellent.  The burps have pushed it all the way up to a solid B.  This is an unexpected turn of events.  The tacos are not super-spectacular on the front end, but it’s a gastrointestinal investment, of sorts.  If you’re patient and disciplined, you’ll eventually reap the awards. Almost like a mutual fund.

Well-done, sirs!  Well-done.  I apologize for my hastiness, and almost not allowing enough time for the gassy magic to take hold.

Wow.  I might not even go to bed tonight.