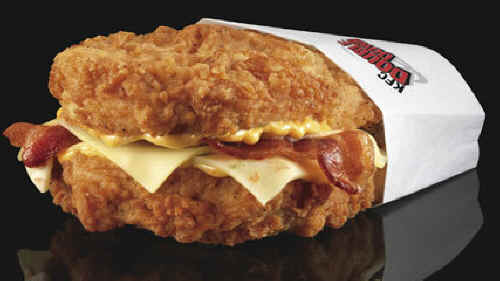 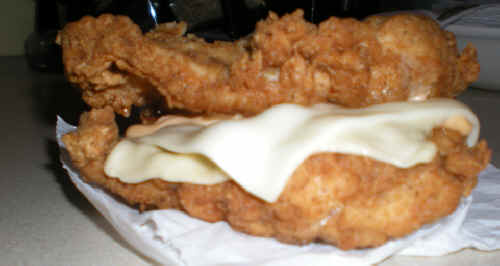 “Link bait” is a phrase used by bloggers, to describe a type of blog post carefully designed to earn links from other sites.  They’re often filled with controversial, provocative opinions and “facts,” calculated to inflame — and earn a load of backlinks to the website where the post appears.

And I’m fully convinced that the marketing department of KFC has mastered the art of link baiting…  A few weeks ago it was meat with a handle, and now this.

I mean, seriously.  A bacon and cheese sandwich where the bread has been replaced by two pieces of fried chicken?  That’s designed to go viral on the internet, and get “KFC” mentioned at hundreds of blogs and read by millions of people around the globe, as sure as my ass is threatening the structural integrity of this chair.

Indeed, here are Google’s blog search results, for a sandwich that was only unleashed on the public 24 hours ago.

So, I feel a little manipulated, if you want to know the truth.  But I have a duty, self-created, to try the bastard out and report back to you guys.  And that’s exactly what I’m doing now — under protest.

I went to our bad-neighborhood KFC yesterday afternoon, and ordered a Double Down sandwich through the drive-thru window.  They’d been running a countdown clock on their corporate website, leading to April 12 — Double Down Day — and I wanted to be among the first to try it.

The woman inside the squawkbox tried to upsell me to the meal deal, but I told her I only wanted the sandwich.  “$5.29,” she answered, which my inner sensors calculated as roughly one dollar too much.

I drove the scandalous sack home, and snapped the “reality” photo above.  Then I took a bite.  Hmm… spicy.  And what’s that sauce?  I wasn’t aware of a sauce.  I’m not really a fan of sauces, generally speaking.  And wasn’t there supposed to be bacon on this thing?  …Holy shit, the sodium!

Those were my initial thoughts, in case it’s not clear.

It turns out they slap a slice of Swiss cheese on there, along with a slice of Pepper Jack.  And the latter is apparently where the spiciness was coming from.  Needless to say, it wasn’t all that hot, but it was definitely discernible.

The sauce, referred to as “the Colonel’s sauce” in KFC marketing literature, is apparently mayonnaise.  I’m not sure, but it was definitely mayo-based, and I didn’t like it.  In fact, it interrupted the flavors of all that meat and cheese.  Why must there always be a sauce of some sort?

And “the Colonel’s sauce?”  It makes me wonder what happened later in the day, at the Tijuana Picnic.  Blecch.

The amount of salt, once again, was almost unbelievable.  I like salt just fine, I’m no saltophobic, but holy crap nodules!  Everything I buy at KFC is radically overloaded with sodium.  It felt like my kidneys were cutting in and out.

And the fact that I couldn’t taste the bacon…  Well, that’s a big problem.  The fried chicken overpowered everything, and if I’d been blindfolded I would’ve told you there was no bacon present.  I’d probably say it was a ball of chicken stuffed with cheese and mayonnaise.

I didn’t like the Double Down, and it’s very likely I’ll never have one again.  In fact, I pulled the Pepper Jack off, and gave our dog Andy the last one-third of the sandwich.  I couldn’t finish it.  After the first couple of bites it became a chore, and I was quickly fatigued.

I give the new Double Down sandwich a C minus, because I’m feeling unusually generous today.

And since I’ve painted myself into this fast food corner, I’ll undoubtedly review the next over-the-top offering from KFC as well.  Care to predict what it might be?  Possibly a meat helmet?  A globe of chicken that can be lowered over a human head, and eaten from the inside-out?

Help me out, folks.  Use the comments link to make your prediction of the next link bait offering from KFC, or any of the other fast food places, for that matter.