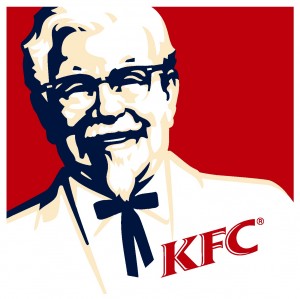 KFC is now selling chicken with a handle.  No seriously, check out this TV commercial, about the new Boneless Filet.

When I first saw it, I laughed out loud.  Those dudes are smiling smugly, and eating what appears to be a chicken-apple.  The ad makes it look like a large ball of meat, easy to enjoy on the go.  You know, due in part to the slip-on poultry handle.  As well as its general… ballness.

Oh, I had to try it, and on Friday I did.  Here’s a picture of the one I was served, on the passenger seat of my car: 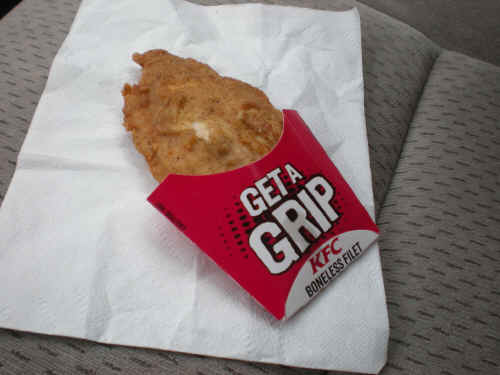 As you can see, the real life version isn’t much like the television depiction.  It’s not a ball at all, it’s flat. The thing is advertised as a boneless breast, but mine must’ve come from the Kate Moss of chickens.  Wotta rip-off!

Basically it’s the filet that goes on a chicken sandwich, stuck inside a fry box.  Here’s a photo with the handle disengaged: 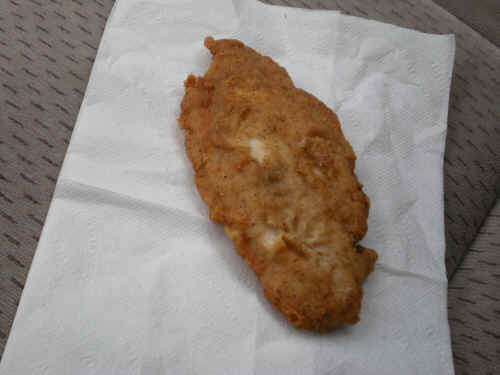 It smelled good, though.  And the chicken was certainly piping hot.

I picked it up, while parked alongside the bad-neighborhood KFC (with doors locked), and noticed that the breading was wet.  There was no crunchiness at all, and whenever one of my fingers came in contact with the filet, the breading would just slide away.

I took a bite, and my first reaction was positive.  It was juicy and tasty.  Not bad… despite its disappointing lack of heft.

But then the salt started building up in my system, and I thought my heart was going to explode.  Holy crap on a hand truck!  The sodium!  I like salt just fine, but prefer to spread a week’s worth over an entire half-week.  I don’t like to take it all at once.

Wow!  It was almost as salty as the McDonald’s Angus burgers, and that’s saying something.

At the end of the experiment I was grimacing and my heart was racing.  I don’t eat at KFC very often (read about it here), so maybe veterans are used to the sodium avalanche.  But not me, and it ruined an otherwise decent piece o’ fried bird.

I’ll give it a C plus.  And it’s very unlikely I’ll ever have another KFC Boneless Filet.  If it were an employee, I’d be forced to mark the file: not eligible for rehire.

Have you tried this latest fast food gimmick?  If so, tell us your opinion in the comments.

Also, what are your favorite foods with a handle?  I’m talking natural handles (broccoli, ribs) as well as foods with added-on handgrips (Popsicles, corndogs).  Tell us all about it, won’t you?

And if you feel like it… what other popular foods could benefit from an easy-to-grasp appendage?  What do you think?  A spaghetti cone?  Tossed salad on a stick?  Use the comments section below.