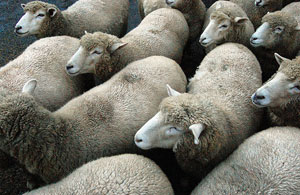 I was almost late for work on a recent Sunday, because of a traffic jam on Interstate 81, generated by a local appearance by Trans-Siberian Orchestra.

When I realized the source of my trouble, I had a mini-meltdown and started hollering belligerence, and screaming “Baa Baa, Mr. Sheep!” at my passenger windows.  Trans-Siberian Orchestra is, in my opinion, one of those things people think they’re supposed to love (“it’s so beautiful!”).  So they eagerly fall into line behind all the other suburban robots, and get in my goddamn way.

Or am I way off on it?  Admittedly, I don’t really know what I’m talking about…

Regardless, I hate the Mr. Sheep stuff.  I used to work for a guy who was fully and completely paint-by-numbers middle aged, and followed all the latest trends.  And it made my skin crawl.  I haven’t seen him in many years, but I’d bet good money he’s now a big fan of Trans-Siberian Orchestra and Mannheim Steamroller, around the holidays.  Because, you know, that’s what is expected.

I was complaining to Toney about this, after I finally arrived at work, and she said, “Yeah, it’s like those Vera Bradley bags!”  I don’t know what she was talking about, but she seemed to have strong opinions on the subject.

Adults are all the time rolling their eyes at the “crazy” fads of the young, but the eye-rollers are just as guilty.  Branson, Missouri, trips to the Dominican Republic, those idiotic shoes with rounded bottoms, Eat, Pray, Love in paperback, portable fire pits, ladder golf, icicle Christmas lights, stoopid diets, stick figure decals of each family member on the back window of the SUV…  Kiss my ass!

The closest I’ve come to crossing over to the dark side recently, was my fondness for the TV show LOST.  But we started with the first episode, before the herd animals had gathered.  Even if I was sure it was a great show, there would’ve been no way in hell I would have watched it after everyone started talking about it.  That would’ve ruined it, for at least ten years.

‘Cause I’m instinctively anti-fad, especially the middle-aged variety…  I’m hard-wired that way, for better or worse.  What are some of the other current or recent adult trends of the suburbs?  We need to create a list, right here at The West Virginia Surf Report.  Help me out, won’t you?

Last Thursday I watched the HBO documentary about the making of Darkness on the Edge of Town, by Bruce Springsteen.  It was excellent, and it’s triggered a full-on Bruce jag; I’ve been listening to almost nothing else.  Last night I loaded a bootleg recording of a concert from 1978, onto my iPod, and I’m dying to buy the new collection of vintage outtakes, called The Promise.  Soon, it will be mine.

Unfortunately I’ve only seen Bruce in concert once, but it was a good show.  It was the Tunnel of Love tour, in Chapel Hill, NC.  I remember he came to Charleston, WV in 1978, but I had no interest at the time.  I do have a bootleg copy of the show (here’s some audio from the concert), but it’s not the same.  And it’s just one in a long line of my musical regrets…

Another was when Nirvana was playing almost literally across the street from my apartment in Atlanta, at a small club, a few weeks before Nevermind was released.  And I decided at the last minute I’d rather just stay home, and probably ended up watching Beverly Hills 90210 or something.  I did see them play live once, but it was after they’d already become huge, and I had to sit a cuppa two tree football fields from the stage.  Oh well.

Do you have any such musical regrets?  Please tell us about it in the comments.

And I suppose I’m now going to be accused of following the Bruce fad, and the Nirvana fad, not to mention the iPod fad.  I don’t think it’s a good comparison, but whatever; I can live with it.  I never claimed to be fair or consistent.