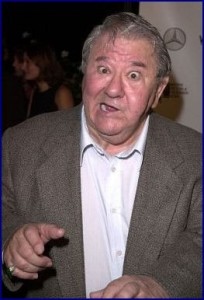 A couple of weeks ago something happened to a length of guttering on the front of our house.  A nail, or somesuch, said fukkit and the thing started drooping in the middle.  It looked like Buddy Hackett’s bottom lip.

“We need to get that fixed,” I told Toney.  Which meant:  we need to open the Yellow Pages and hire someone to take care of it, ’cause I’m not climbing up on that roof.  What am I, Sol Spiderman?”

It looked kinda shabby, but probably wasn’t as noticeable to passersby, as it was to us.  And since there wasn’t a powerful urgency, we did nothing.

And on Friday it fell off.  Well, it didn’t come completely loose, just one end of it detached from the house.  And it instantly turned our respectable home into a white trash shack.  And I can’t have that.

On Saturday morning a man arrived with all manner of equipment, and brought our shit correct.  He had a prissy little mop-dog with him, was walking all around our house, and across the roof.

Our dog Andy (Mr. Dingles) was about to have a full-on stroke, and when the mailman arrived right in the middle of it all…  Well, I’m just glad our family pet didn’t explode in the living room, as a result of “too much.”

But the guy cleaned our gutters thoroughly, lectured us about getting it done in November instead of spring, repaired the Hackett lip, and went on his way with one of our checks in his pocket.

And that’s the Jeff Kay style of home repairs.

We took Andy for a walk on Saturday afternoon, and discovered a whole new neighborhood just a short distance from our house.

It was incredible, I could barely believe it.  The homes were huge and new — some are still being built — and it’s probably less than a mile from us.  How could such a thing happen, without us knowing?

We walked up and down the new streets, and people were out in their yards and washing their cars.  It felt like we’d slipped into some kind of parallel world.  Our house was (presumably) right over there, but here was a freaky, pristine community where none had been before.

All four of us were blown away (Andy didn’t seem to give a crap), and we oohed and aahed our way through the whole development.  It was eerie, yet really cool.

They can insert full-blown subdivisions into seemingly impossible places, with the precision of a spine surgeon, can’t they?  But how did they get all that construction equipment in there, without any of us noticing?

It’s freaking me out, man.

On Friday I sent a message to the mailing list, announcing the launch of a new website being maintained by Metten and myself.  It’s called Mockable, and you can see it here.

Right now the two of us are handling the updates, but we might solicit contributions in the future.  The concept is fairly simple, and is summed up in the tagline:  Your online clearinghouse for all things mockable.

We’re both really excited about this new project, and hope you guys will enjoy it as well.  Please feel free to comment and participate as you see fit.  And if you want to promote it in some way, we won’t object to that either.  We’re going to try to post something new every weekday, so there will be plenty of mockables to go around.

We’re not going to tell you which one of us wrote each article, it’s going to be a Lennon/McCartney kind of a deal, so you can try to guess, if you’d like.  Are our writing styles distinctive enough for you to differentiate?  I’d be interested in knowing.

And this is a quickie, but I’ll leave you now with the Question of the Day.  When you were a kid, middle school-age or younger, what did you want to do when you grew up?  And did you do it?

When I was really young, I wanted to be an astronaut.  This was around the time of the Apollo missions, and I think every kid in America had the same thoughts.  But, of course, at this point I could wear a lunar module like a pair of pants.  I don’t think I was put on this Earth for space exploration, I really don’t.

And I wanted to be a baseball player, but was never foolish enough to believe it would ever happen.  You know, since I wasn’t very good.  Then I adjusted my plans to working in the Cincinnati Reds front office — like Castanza with the Yankees.  And how sad is that?  Dreaming of paper-pushing at a young age?

By the time I reached high school I wanted to be a writer, and what do I actually do?  That’s correct, inventory management.

What about you?  How close did you get to your childhood dreams?  Did any of you actually make it?  If so, I’d like to shake your hand.  Sincerely.