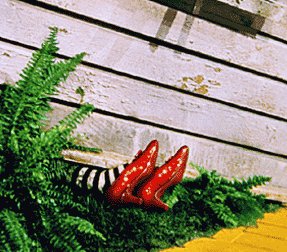 I heard someone on the radio recently, claiming that everybody has obsessive-compulsive disorder to a certain extent.  Most folks are able to adjust and it’s not a huge issue for them, but people with advanced cases can end up in the wacky shack before it’s all over.  You’ve seen them on TV, muttering numbers and going through complicated rituals, etc.  Weird shit.

If it’s true that we all suffer from OCD (and I suspect it is), I’d like to know how it manifests itself with you.

If you could see my desk at work, you’d know right away that I wasn’t able to escape unscathed.  Unless I’m in the middle of something extra-crazy, everything is in its place.  The phone is pointing in a specific direction, and if it’s moved even a centimeter while I’m away, I know.  And it pisses me off.  Same goes for my legal pad and pen, calculator, and desk calendar.  Keep your booger-hooks off my stuff.  ‘Cause I can sense that something is askew, even if it’s imperceptible to the human eye.

There’s a guy who sits a few desks away from me who works amongst a towering heap of trash.  Clearly, his dusting of OCD hasn’t triggered a neatness compulsion.  I have to turn away, while I’m walking past.  It’s almost too much to handle.  I expect it to collapse on him someday, and his toes to curl up underneath, like the Wicked Witch of Wilkes-Barre.  But I digress…

The strange thing?  I’m not all freaky-neat in my office at home.  In fact, it’s often a disgraceful mess.  Like right now, for instance…  Wonder what that’s all about?  My OCD seems to be location-specific.

What about you?  Can you point to anything that might be an indicator of obsessive-compulsive disorder?  If so, tell us about it.  Also, if you have any stories to tell about people you’ve known, who are afflicted much worse than you are… Please use the comments link below.

Oh, and I also HATE when people have icons on their desktop just scattered around all willy-nilly.  Right-click that shit into some kind of order, already!  Holy hell.  It’s unnecessary chaos, and bothers me greatly.

Now we need your stories.

And the second Question of the Day… Which well-known comedians have you seen perform live?  You know, speaking of OCD.  I’ve been to hundreds of rock shows, but not a whole lotta comedy.  Oh, I’ve visited a few comedy clubs along the way, but the “talent” was usually unknowns.  To me, anyway.

As far as well-known comedians are concerned, I can only think of Steve Martin, Jay Leno, Sam Kinison, Jeff Foxworthy, and Robert Schimmel.

Steve Martin was the very first “concert” I ever attended, in Huntington, WV, at the height of his white suit wild-and-crazy-guy popularity.  We were seated far back, in a giant auditorium, and he did a special magic trick for us called “the dime trick.”  Heh.  The encore:  “King Tut.”

Jay Leno appeared at a deli in Charleston, WV, called Michael B’s (I swear it’s true).  They wanted to start booking comedy acts on the weekends, and Leno was the first.  This was before the Tonight Show, when he used to go on Letterman all the time and bitch about the stuff that was getting him “steamed.”  He was really funny back then.  Some of you might have a hard time believing it, but it’s true.

I saw Sam Kinison at a medium-sized theater in Greensboro, NC.  I always liked him, even when it wasn’t cool to admit it, and the Greensboro show was a lot of fun.  The guy was pacing back and forth all night, like he was trying to stop himself from completely losing his shit.  He acted tightly-coiled, if you know what I mean.  I’m still a fan.

Jeff Foxworthy performed at one of our conventions, when I worked in the music biz.  He was funny.  What can I say?  You try not to like it, but he wins you over.

And I saw Robert Schimmel at a fancy-pants hotel in Anaheim, CA, years ago.  Good god, my sphincter nearly released.  I was sore for a week, from laughing.  He had that room rocking, and it was an amazing thing to behold.  The guy was a master… and now he’s gone.  He’s probably raising nine shades of hell with Kinison in heaven (or wherever).

Have you seen any big-time comedians perform?  If so, tell us about it in the comments section below.  And just so you know, Toney saw Monty Python at the Hollywood Bowl, when she was a teenager.  How cool is that?  She also saw the Clash, and I didn’t.  But that’s another story for another day…