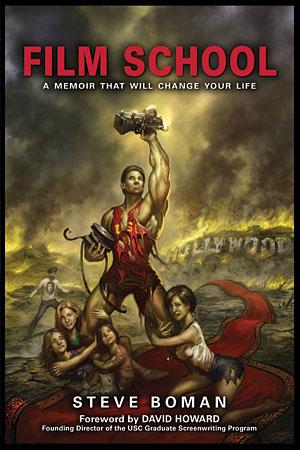 I’m going to blow your mind here.  Ready?  OK, I sometimes read books to experience things I’d otherwise never be exposed to, and to visit places I’ll probably never have an opportunity to see in real life.

I told you.  It’s a revolutionary concept, I know.  I hope you’ll be able to recover.  I hope I haven’t shattered anyone, forever.

In any case, I’m almost finished with a book that falls squarely into that category.  It’s called Film School, and is the memoir of Steve Boman, who went through the University of Southern California’s School of Cinematic Arts.  It is a school so prestigious and selective, they rejected a young Steven Spielberg three times.

I’ve always wondered what went on inside the famous film schools, and this book helps answer the question.  It’s a great story, told by a man who entered USC at an advanced age (relatively speaking), after having spent many years working as a journalist.  His graying hair made him stick out from the crowd, instantly.  And his wife, three children, and house in the suburbs further differentiated him from the other students.

The book is well-written and funny, and full of details.  It’s not a scandalous tell-all, nor is it a how-to book.  It’s just one guy’s experience inside the most famous film school in the world.  It is exactly what I hoped it would be.

I recommend it highly, for anyone interested in the subject.  I downloaded it to my Kindle for a mere $1.99, which is a steal.  Grab it here.  It might cost more now, but it’s still worth it.

And if you have any non-fiction “I’ll never get to do it” books to recommend to me, I’d love to know about ’em.  Use the comments link below.