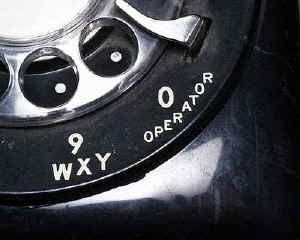 In the little town where we live, there’s exactly one phone company to choose from.  They somehow own the entire infrastructure, will not share with other companies, and it’s like 1965 up in this bitch.  I’m surprised we’re not required to “rent” a seven pound rotary-dial telephone from them, as well.

I don’t know all the details, and don’t care enough to investigate it, but they’ve also got the phone numbers locked-down.  So, if you get sick of their no-competition pricing, and go to Vonage or whatever, you can’t transfer your number.  They’ve found a loophole in the federal law, having something to do with “rate area.”  Who the hell knows?

Anyway, we finally gave up our number, and switched to Vonage.  But I never liked it.  I didn’t care for the additional router, it bugged me.  And some of the phone calls sounded like a warped record.

Toney wasn’t a fan either, and we considered just dumping our home phone altogether.  All four of us have cell phones, and I rarely use the home line.  Why pay for a service that’s almost never used?  What am I, Bubba Vanderbilt here?

But Toney was talking to the cable company a few days ago, something to do with our bill, and the guy told her they’re offering phone service now.  And it goes through the wall jacks, instead of that ugly blinking router boolshit.

And get this… We had cable, DVR, and internet.  And now we have cable, DVR, internet, PLUS phone and HBO — for thirty dollars less per month.  And that’s not an introductory price, either.  That’s the cost.

The phone service and HBO (we weren’t in the market, but they threw it in) are better than free.  We got a whole bunch of extra goodies, for less than the original price.  And that just doesn’t happen very often.

The local phone company still rules over certain exchanges with an iron fist, and remains arrogant as a sumbitch.  But I bet that’s all about to change.  Ya know?  They’ve fostered so many bad feelings around here, people will be jumping-ship in droves.  And I predict that company is about to get real nice, real quick.

And to that I have a quick and concise response:  Fuck off.  I won’t soon forget the way they treated us when they could get away with it, and I hope the rest of the town sees it the same way.  They can jam it, deep and on a slant.

All that stuff you just read?  I had to write it twice.  I’m unclear what happened, but the Word file where I originally wrote it was lost.  Well, I found the file, but it was inexplicably empty.

It’s like I finished most of an update, and shut everything down without saving it.  I can’t imagine I’d pull such an idiotic stunt at this late date, but I guess anything’s possible.

Sometimes I worry that I’m kind of stupid.

But, of course, nobody really thinks that, do they?  They might begrudgingly admit to not being well-educated, but never straight-up stupid.

Everybody thinks they’re a good driver, too.  Ha!  That’s a good one.  Even people who’ve been involved in accident after accident after accident blame it on bad luck, or other drivers.  It’s never — NEVER! — their fault.  But I have a reality check for about eighty percent of the people on the road:  You suck, and your license should be confiscated at once.

I, on the other hand, am a very good driver.  I’m courteous, always know what’s going on around me, and never tailgate.  Some days I’m convinced I’m the final one.  Pass the beer nuts.

Also, everybody believes they’re funny.  We Surf Reporters are genuinely funny, of course, but we’ve all met people with a lousy (or completely nonexistent) sense of humor.  And yet, they always believe they’re funny.

Most of them develop an excuse for why people don’t laugh at their “comedy.”  Usually it’s some variation of “people just don’t get my warped sense of humor!”  Warped?  A tragic lack of cleverness might be the actual stumbling block.

Many unfunny people try to compensate with volume, as well.  For some incomprehensible reason, they believe a statement that’s completely devoid of wit becomes hilarious when shouted.  If you can’t be funny, be loud…

What other human attributes are like the ones above?  What are things all people believe about themselves, whether it’s true or not.  I was going to include sexual prowess, but I’ve met guys who’ve admitted to being lousy (and Cheetoesque) in the lovemaking category.

Help me out with this one, won’t you?  Use the comments link below.