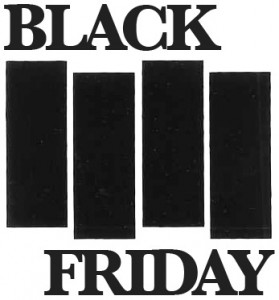 I hope everyone had a great Thanksgiving.  Ours was nice, but (in my case) quite abbreviated.  My parents were here, and I got to spend Thursday and part of Friday with them, but beyond that… Toney and the boys served as hosts.  I was back at the job by Friday afternoon, because, you know, those sixty hours aren’t going to work themselves.

Toney is always paranoid when my folks come to town.  Their house is like a museum – with nothing even a centimeter out of place.  And ours is not.  “It feels like the health inspectors are coming,” she said earlier in the week.  And I thought that was pretty funny.

But it went well, I believe.  Dinner on Thursday was good, and Friday’s leftovers were even better.  We didn’t drink as much of the recipe as we would’ve, under normal circumstances.  But nobody got the shakes, or anything.  Heh.

The only downside of the visit was hour upon hour upon hour of… The Weather Channel.  Why do so many people, when they reach a certain age, develop an insatiable thirst for weather forecasts?  “It’s supposed to be sunny tomorrow,” is good enough for me.  In fact, I don’t even need that much.  Who gives a crap about weather, unless it’s radically extreme?  I don’t even notice it, 99.9% of the time.  I mean, seriously.  It’s not like we live in a thatched hut, or something.

The Weather Channel showed a never-ending loop of stock footage, featuring people exiting shopping malls around the country, all day long.  I saw the same woman carrying a box with the Westinghouse logo on the side, roughly seventy-five (possibly one hundred) times.  I was about ready to walk out to the garage, cross myself like a Latin baseball player, throw a rope over a roof beam, and find sweet release.

Somebody also cranked the heat during the first night, and the house was like a sweat lodge.  None of us slept very well, because we were all thrashing around, and getting twisted-up in the covers.  I drifted in and out of consciousness throughout the night, and woke up more tired than when I’d gone to bed.

But, other than that, it wasn’t so bad.  In fact, it was really nice to spend time with my parents; it’s probably been a year.  I need to make more of an effort to visit them, before full Harry Chapinization takes hold.  Or something worse.

On Thursday night we watched some home movies, created when the boys were pre-school aged, and that was surprisingly fun.  Whenever we bust out the vintage videos, we seem to watch the same ones – usually the baby years.  I can’t remember seeing the pre-school/kindergarten edition in a long time.  The Secrets were cute, and always smiling.  Andy even made a cameo appearance as a goofy, clumsy pup.  Against all odds, I enjoyed watching the old footage.

On Thanksgiving morning I rummaged through our big ass newspaper (the worst day of the year to be a paperboy…just an FYI), which was packed-out with ads featuring all the stores’ “amazing” Black Friday bargains.  Wal-Mart had a Flip UltraHD camera for $99, and there were a couple of crazy deals on TVs, but other than that… nothing really caught my eye.

I noticed K-Mart (I think) was having a six-hour underwear “event,” and that made me laugh.  I imagined a street fair atmosphere, with accordion music, and people engaging in wild Russian crouch-dancing — around a giant bin of multi-colored Hanes ball socks.  Do people really give each other packages of standard, everyday underwear, to celebrate the birth of the Lord?  I don’t get it.

In any case, did you go through the big stack o’ ads on Thursday?  And, if so, what caught your eye?  I don’t know if I’ve finally reached a point where I have almost everything I want, or what.  ‘Cause I almost never see anything that captures my imagination anymore.  What about you?

Also, is there something you’re hoping Santa will bring you this Christmas?  I’m fixated on the Kindle, almost exclusively.  My birfday is coming up in a few days, and I planned to treat myself to the $139 Kindle, but I think I’m going to have to wait until Christmas.  Necessary expenditures are still taking precedent, unfortunately.

And if Santa doesn’t come through for me, I’m fully prepared to take matters into my own hands.  I will not allow some fatass in a ludicrous Velour suit to hold disproportionate power over my life.

Are you hoping for something special this year?  If so, please tell us about it in the comments.

And before I call it a day here, I’d like to remind you, once again, to use our Amazon links while doing your holiday shopping.  Tomorrow is something they’re now calling “Cyber Monday,” which sounds pretty douchey to me…  But if you find yourself getting caught up in the vortex of that deal (or any other shopping day for that matter), please enter the Amazon site through one of our links.  It’ll cost you nothing extra, but will help support the Surf Report.

Thank you very much, and I’ll see you guys again on Monday.